The cryptocurrency market looks ready for a new wave of growth, the bulls only have to maintain the current levels and rise just a bit hire to take the opportunity of a descending correction away from the bears.

The buyers managed to demonstrate a good bounce upwards. Currently, such assets as the Bitcoin or Bitcoin Cash promise interesting growth. While on the BCH/USD chart there seems to be a reversal Head and Shoulders pattern forming, hinting on further growth, the Bitcoin is yet preparing for leaving the borders of the channel and go on rising confidently.

Unfortunately, the Ethereum, Litecoin, and EOS remain under pressure. There are some signals of descending on their D1 charts. However, if the bulls manage to break through the nearest resistance levels, these assets will be ready to switch to sustained growth as well.

The quotations have demonstrated an aggressive bounce off the support line. However, currently, the price is testing the resistance line, looking like a descending trendline, near $9800. To fully continue the growth, the buyers must push the price even higher. A breakaway of the descending trendline on the RSI will be a good indicator of further growth. In most cases, the quotations return to the broken line and then keep growing. As the main trading idea, we can accept an insignificant correction to $7700, after which a bounce and growth should follow. The scenario may no longer be valid if the quotations fall below $6875, which will mean a breakaway of the lower border of the channel and further decline. 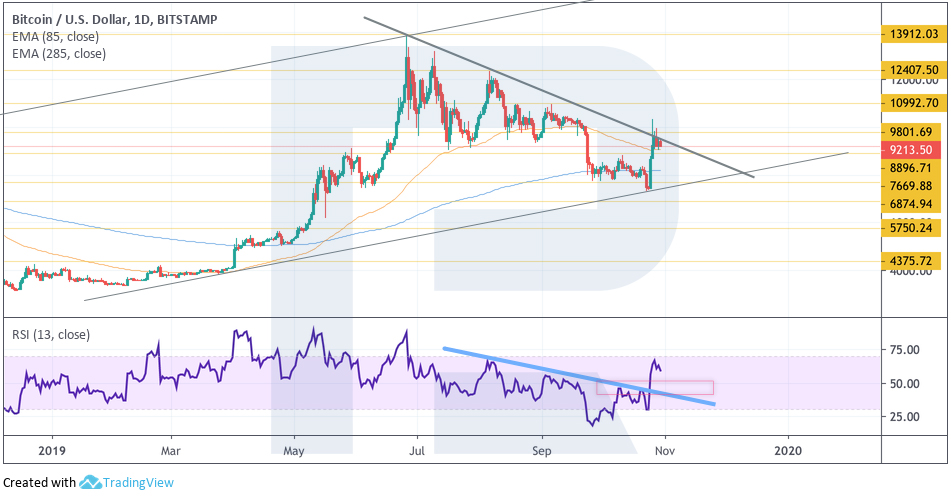 On H4, the quotations have managed to escape the short-term descending channel. This might be the first sign of an upcoming reversal of the current downward correction. However, the end of falling will only be confirmed by strong growth and securing above $10995, which will mean an escape from the descending channel. In this case, the aim will be near $12405. The RSI values have pushed off the resistance line again, so we should expect a decline and a test of the broken border of the channel. After the decline, we can start speaking about growth aiming at $10995. 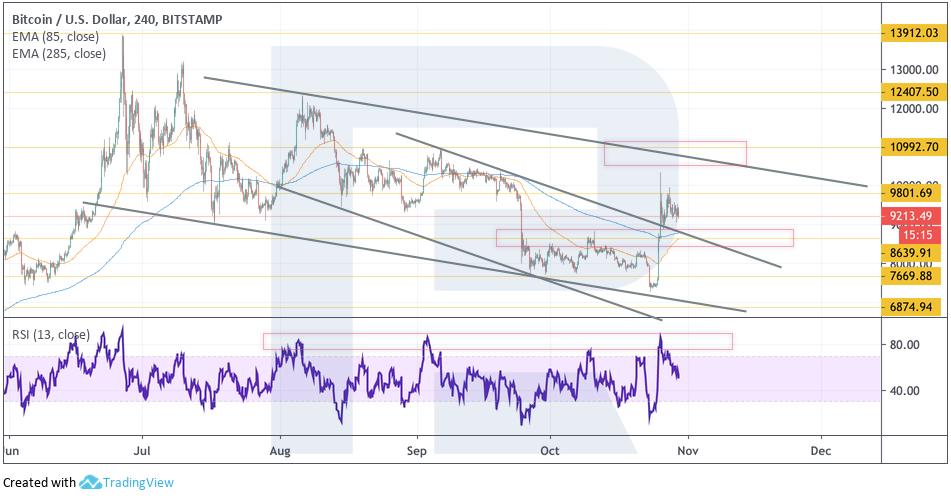 The buyers have also managed to keep the Ethereum quotations in the support area around $147.35. Currently, the price has again returned to the area between the Moving Averages, which may provoke an attempt to decline further. Such a scenario is confirmed by a bounce off the descending resistance line on the RSI. As the main idea, we should expect a bounce off the lower border of the ascending channel and further falling with the first aim at $147.35. If it is broken through, the quotations might continue declining to $100.20. The negative scenario may no longer be valid in case the MAs are broken away and ETH/USD secures above $239.75. If so, we might expect growth to $280.60. 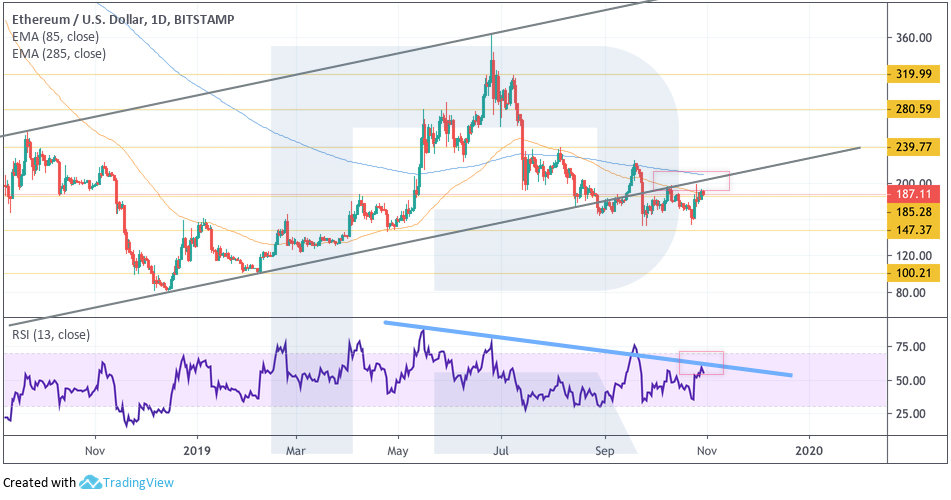 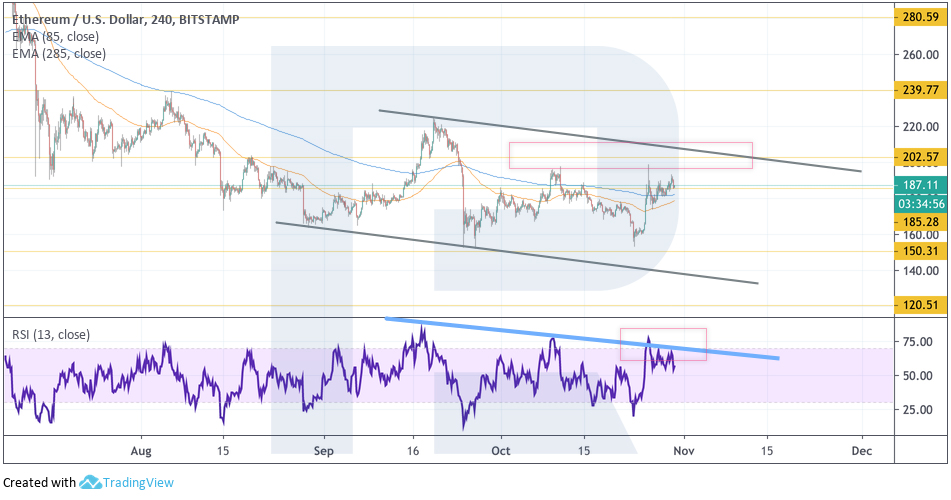 On D1, the RSI values are testing the resistance line. It is too early to speak about a reversal: there is still pressure from the sellers. The MAs also point at a bearish trend. There is a risk we will see a bounce off the resistance line and another attempt to fall to $41.75. The scenario, negative for the bulls, might be canceled in the case of strong growth above $79.05, which will mean the quotations have returned inside the ascending channel and will keep growing to the first aim at $107.80. 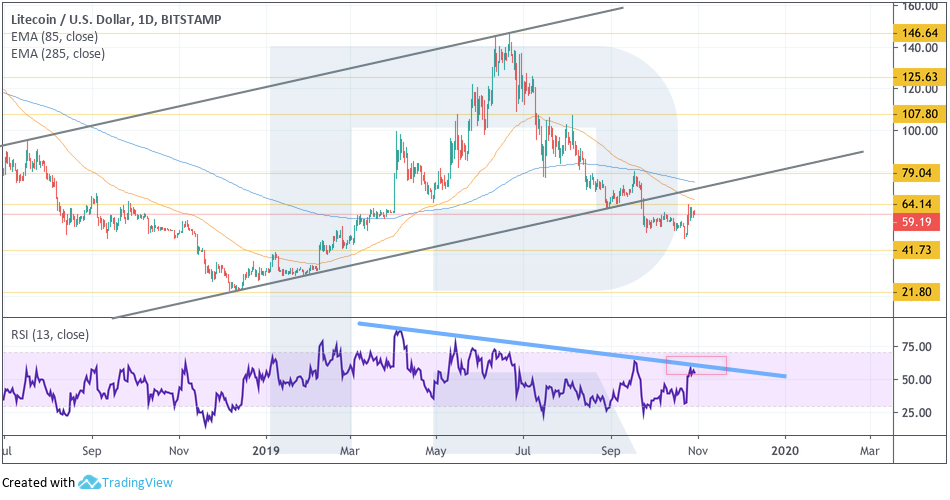 On the smaller timeframes, the Litecoin is testing the upper border of the descending channel. As we can see, the price is bouncing off $64.15. The RSI values have also tested the resistance line. As the main scenario, we should expect a decline to $41.75. The scenario may no longer be valid if the upper border of the descending channel is broken away. In this case, the price should grow to $79.05. 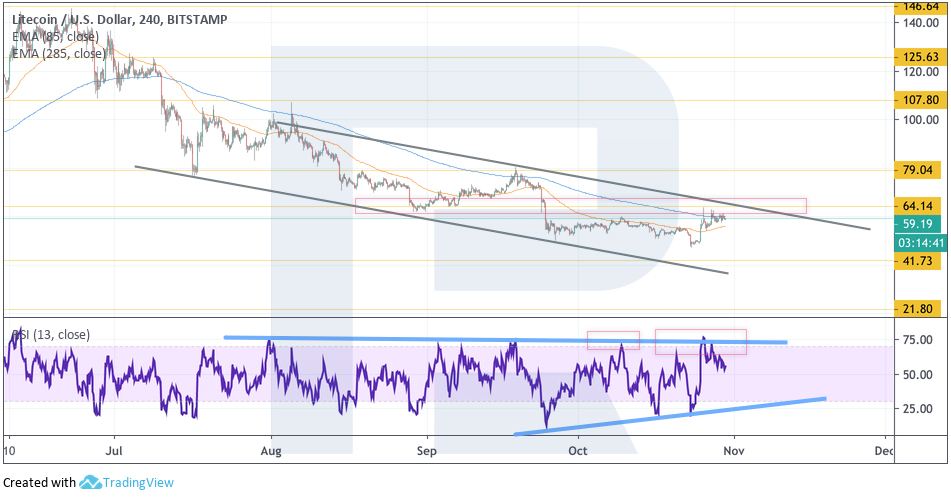 The buyers are trying to reverse the situation for growth. However, here as well the RSI values are testing the resistance line on D1. Earlier, we saw a bounce off it, so while the quotations are below it, we should expect a decline. The nearest aim of the decline might be at $2.06, and if it is broken through, the quotations might proceed to $1.45. This scenario may be canceled by strong growth of the EOS and securing above $4.29, which will also provoke a breakaway of the resistance line on the RSI. If so, the aim of the growth might be at $5.35. 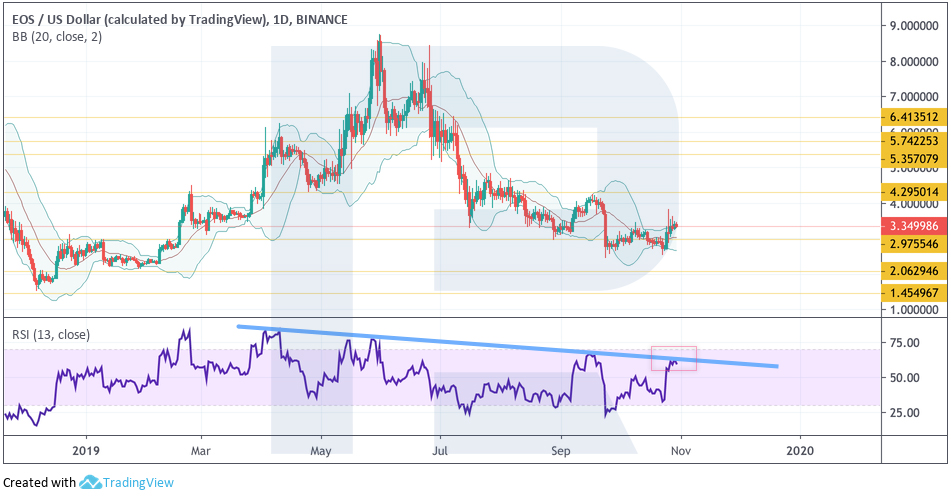 On smaller timeframes, the quotations have pushed off the upper border of the descending channel. If the bears manage to press harder, the cryptocurrency might fall to $2.06 and $1.45. This scenario is also confirmed by a test of the resistance line on the RSI. It should be confirmed by securing below $2.97. The scenario might be canceled by a breakaway of the upper border of the descending channel. In this case, the aims of growth will be at $4.29 and $5.35. 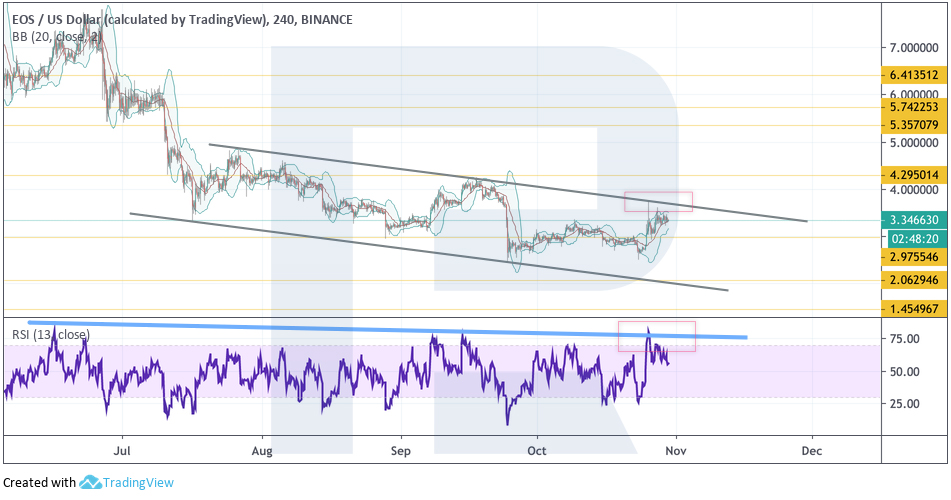 On D1, the buyers have managed to break through the descending trendline. The RSI values have also secured above the resistance line. These signals mean potential growth with the first aim at $355.00. A breakaway of this level should push the quotations to $457.10. However, an insignificant correction, testing the broken trendline on the RSI, should not be excluded either. The aim of the correction may be at $245.00. The scenario of growth may no longer be valid in the case of a decline below the local minimum and securing under $200.00. In this situation, the price might decline to $165.45. 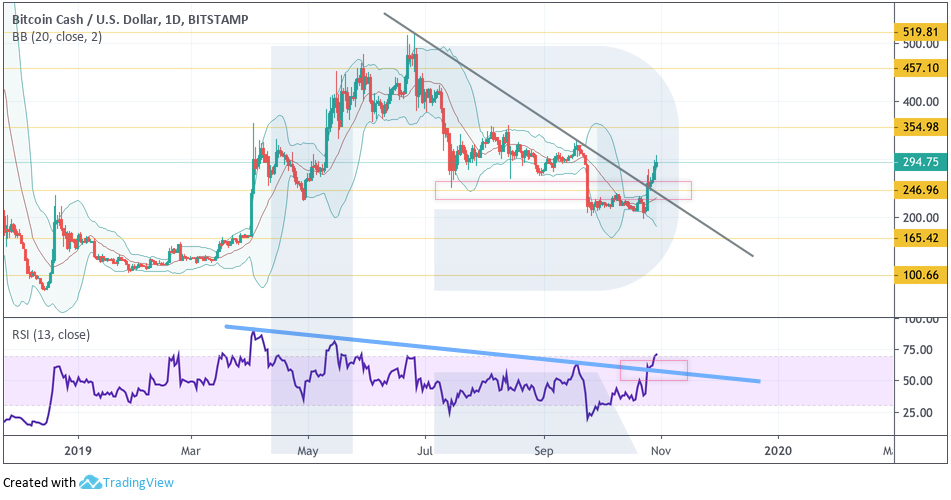 On H4, the quotations have also secured above the short-term descending channel. The appearance of an inverted Head and Shoulders pattern should not be excluded. As we may see, it will be enough for the price to fall to $245.00, and the right shoulder will be complete, followed by strong growth. If the price secure above $335.20, it might be a good signal of further growth. The scenario may no longer be valid if the quotations fall below the support level and trading closes under $199.10, in which case further decline might follow. 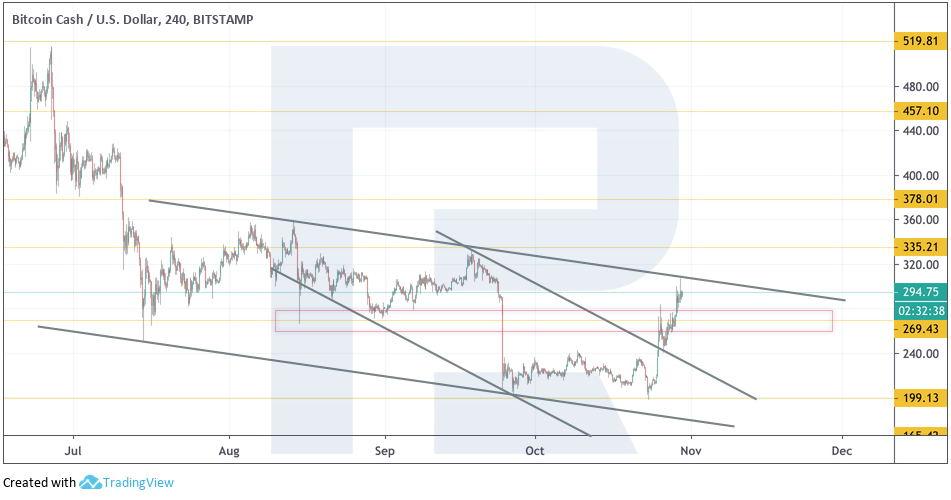