In September 2020, on the eve of the release of NVIDIA‘s next-generation GPU, a great many miners are waiting while hodling, hoping that the new product with greatly improved performance can bring them different mining experiences. A few miners who bought the previous generation products in advance felt regretful and saw that the value of the GPU they just bought was greatly decreased.

What surprised everyone was that the GPU market has entered a special one–and–a–half–year period since then. As the cryptocurrency market has entered a bull market, numerous mining plants have purchased various GPUs in large quantities for Ethereum mining. With the rapid increase of the price of ETH to more than 4,000 USD, even the previous generation and even the old GPUs that were released several years ago have been purchased out, deploying into large-scale mining plants that keep mining day and night. At the same time, the profits of the mining plants are soaring, and the GPU market has also reached an unprecedented high price, even the situation that one GPU is hard to find. Miners who used to buy old models in a time when the market price was low also acquired great profits and their GPU could be sold at a good price by resale.

Ethereum Mining: Why Is the Miner Coming So Late?

As a decentralized encryption network, so as to ensure security, decentralization, and anonymity, blockchain must use encryption technology to process all activities on the chain. The so-called mining is a process in which blockchain miners provide encryption and decryption support for blockchain activities and win the reward of ownership of new blocks through decryption competitions. Since it’s a competition, The higher the hashrate miners have, the greater the reward they will get. This situation pushes the miners to pursue higher hashrate and promotes the rapid development of mining technology.

However, as the second-generation blockchain, Ethereum has also been the second-largest crypto in the blockchain industry for a long time, and its encryption method is special Ethash. Different from SHA-256 used in Bitcoin, Ethash naturally has the feature of “anti-ASIC“, and its decryption process requires not only a high hashrate, but also a large amount of data exchange between the computing chip and memory chip. Traditional ASIC chip possesses a lot of hashrate, but the memory bandwidth is pitifully small, so it is difficult to compete with mainstream GPU. Therefore, the Ethereum mining market has remained in the GPU development stage for a long time, and the network hashrate is not the same as that of Bitcoin: at present, the hashrate of the whole network of Bitcoin exceeds 100EH/s, while that of Ethereum is only 1000TH/s; The hashrate of a single Bitcoin mining machine can reach 100TH/s, today’s 8-unit GPU miner can only provide 400MH/s Ethereum hashrate, and the gap has reached more than 100,000 times.

Obviously, as long as the industry can overcome the memory bandwidth bottleneck of ASIC chips, the mining efficiency of Ethereum can be remarkably improved by ASIC mining machine, which is similar to that of Bitcoin. Over the years, many companies and technical experts have been working hard on this issue day and night, hoping to overcome the challenges through innovative methods effectively and get delectable returns.

Breakthrough–Ethereum Mining Machine Is on the Rise

At the same time that many companies are fully studying the solution of Ethereum mining machines, Ethereum officials are also promoting the construction of a new generation of PoS. Simply put, Ethereum plans to transition from the existing PoW mechanism to the PoS mechanism in 2022. After the transition, the ownership of the new block of Ethereum will be determined by the number of virtual assets staking by miners to the network, rather than the decryption hashrate contributed by the miners. In other words, in the future, there will be no mining activities in Ethereum, and the hashrate competition will be terminated.

In spite of that this upgrade plan has been delayed many times, from the earliest 2020 to the middle of 2022. Judging from the current progress, there is a high possibility that it would be postponed to 2023.

On the other hand, Ethereum mining machine technology finally saw a silver lining in 2021. A company called LOYALTECH, has launched the YM-100 series mining machine, which adopted epoch-making 3D stacking chips for the first time and solved the memory bottleneck once and for all. In short, the ASIC chip of the YM-100 mining machine changed the traditional design of connecting chips by plane circuit board, instead, the memory chip and the computing chip are stacked vertically, and holes are punched vertically in the chip, thus obtaining the transmission bandwidth far exceeding the traditional design. With the rapid increase of bandwidth, the surging hashrate of the ASIC chip can be fully released, which makes the Ethereum mining efficiency remarkably improved. 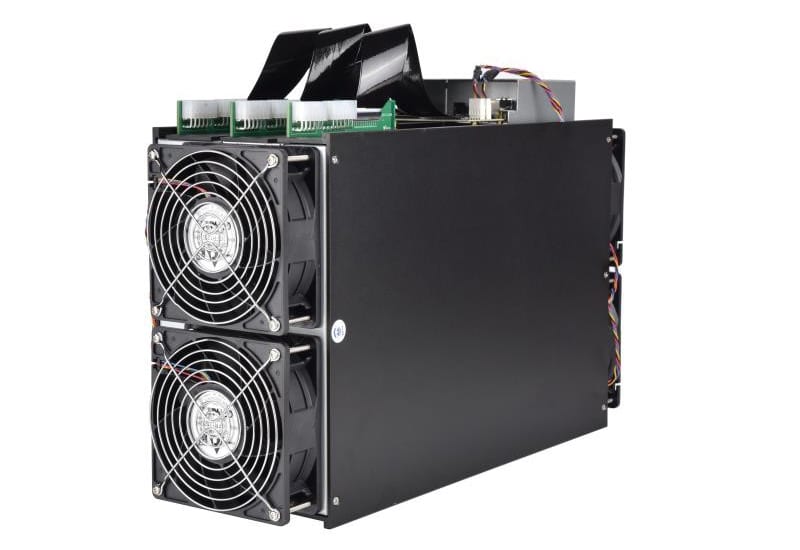 Chip Production Capacity Is the Key to the Ethereum Mining Machine

Still, although the Ethereum mining machine has broken through the technical bottleneck that has plagued the industry for many years, there is still another difficulty in front of mining machine manufacturers-chip production capacity.

After the outbreak of the pandemic in 2020, the IT industry has been significantly promoted by factors such as work from home and remote activities, and the market demand for various electronic products has climbed. However, the pandemic has limited the production capacity of the industry, resulting in an obvious gap between supply and demand in the market. In recent two years, the supply of almost all finished chips has met with serious challenges. It is not uncommon for the price of chips to soar tenfold or even a hundredfold. Under this background, the ASIC chip used by the Ethereum mining machine can’t be unaffected. Referring to the Bitcoin mining machine, if the chip of Ethereum mining machine still uses advanced manufacturing technology, its supply priority must not be compared with tech giants such as Apple, Intel, and NVIDIA. In this way, Ethereum mining machines will be arduous to ship in large quantities, missing out on the precious two-year time window, and ending up in a short-lived miserable situation.

In fact, most Ethereum mining machine chip schemes in the current industry just are in this dilemma. Although the advanced technological process selected by these manufacturers has outstanding technical indicators, the production capacity can not be guaranteed at all, and there is no room for showing what you have gotten. In contrast, LOYALTECH was aware of this problem from the beginning. The YM-100 chip has chosen an extremely mature 40nm process which is hardly affected by the capacity crisis.

40nm process was invented more than ten years ago, and now it has an abundant production capacity and low price. Although the hashrate of ASIC chips manufactured based on this generation process can’t be compared with that of advanced processes, the memory bandwidth is the bottleneck of Ethereum mining, and the 3D stacking technology adopted by YM-100 ASIC chips has the absolute advantage of bandwidth. And the memory chip manufactured by the 40nm process will not have an obvious index influence. Therefore, this generation of technology chosen by LOYALTECH has just become the balance point between hashrate and memory bandwidth, so the company’s Ethereum mining chips still have the top level in the industry.

The adverse impact of the 40nm process cannot be found in LOYALTECH‘s mining machines. On the contrary, LOYALTECH mining machine can obtain absolute productivity advantage and cost advantage with this mature process, which not only far exceeds the GPU scheme, but leads competing products to a great extent.

In the next two years, LOYALTECH‘s Ethereum mining machine will undoubtedly provide the maximum shipment, completely replacing the GPU miner and in the meanwhile, making competing mining machines far behind.

Another key advantage of LOYALTECH is that it enables both ETH and ETC mining. For ordinary mining machines and GPU schemes, once Ethereum completes the PoS upgrade, the existing machines can do nothing but stop mining. Realistically, considering investors need 2-3 years or even longer to recoup the investments, they are very likely to face a loss situation where even their electricity bills cannot be paid back. However, for LOYALTECH mining products, even if the Ethereum mining comes to an end, investors are allowed to transfer to ETC mining and obtain stable investment returns by this way. This core design perfectly solves the biggest concern faced by Ethereum mining investors in 2022, and it is also the embodiment of LOYALTECH’s vision that it always be truly considerate for its customers. Bear this in mind, LOYALTECH mining machine will become the pragmatic option for the Ethereum mining industry in the next few years.

Various products can meet the market demand, and Ethereum mining ushered in a new era.

Currently, LOYALTECH is developing two kinds of mining machine products, namely YM-100 and YM-200. The former has 2,400M hashrate and 2,300W power consumption, and its size is about equal to that of a small miner, so it is the best choice for large mining plants. The latter has a hashrate of 200M, power consumption of 180W, and its size is only slightly larger than that of the ordinary docking station. It is especially suitable for office workers, mining enthusiasts, mobile scenes, and even students to purchase as an extra investment. YM-100 and YM-200 have most of the demands in the Ethereum mining market, which greatly reduces the threshold of mining investment and brings unprecedented opportunities for the industry. 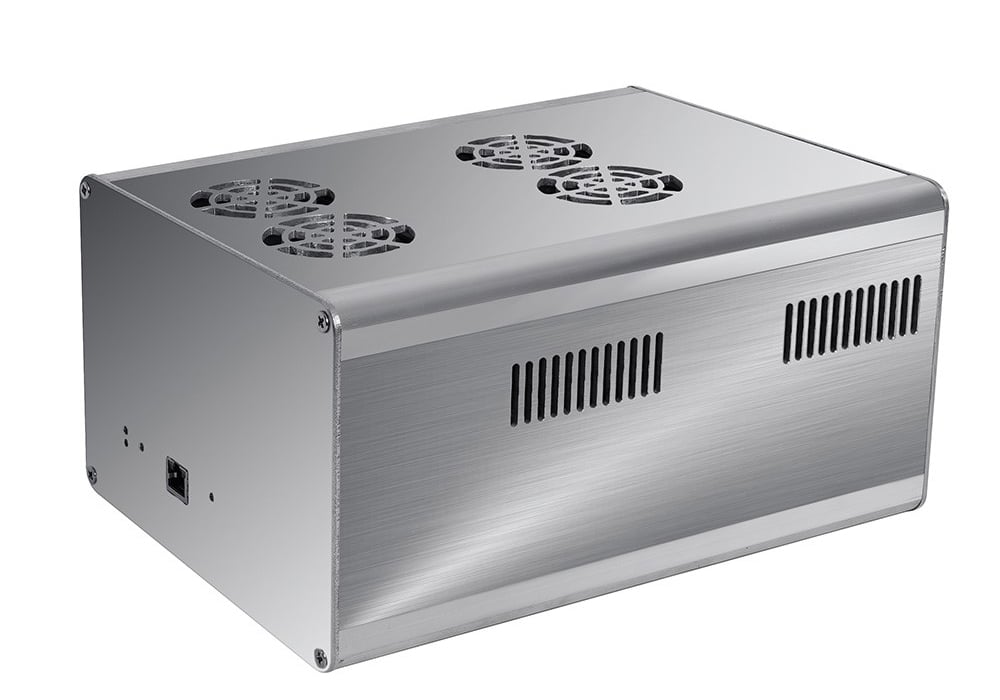 YM-100 miner has been mass-produced on a small scale since the end of 2020, and now it has entered the mainstream mining machine market, sold to American listed companies and VIP customers, and began to replace GPU miners as the main source of mining hashrate. YM-200MINI will be launched at the BITCOIN 2022 in Miami, the USA on April 6th, 2022. Both mining machines are equipped with 6G DAG memory capacity, which can support the mining demand of Ethereum by the middle of 2024; If the PoS upgrade of Ethereum is completed, the two products can also seamlessly be compatible with ETC mining, uphold customers’ investment continuously. In order to further guarantee the supply, LOYALTECH also introduced the technologies and methods learned from the supply chain of the world’s largest PC manufacturer, and spared no effort to provide customers with multi-layer guarantees:

On-time delivery, the industry’s first “late delivery with hashrate compensated” is stipulated in the contract;

Machine problems will be repaired within five working days after sales, and if it cannot be repaired, a new machine or backup machine will be offered;

The error of hashrate is controlled within 5%, and the error exceeding 5% is indicated in the contract to make up the hashrate.

Accurately, this commitment is nowhere to be found in the whole mining machine industry. Nevertheless, LOYALTECH has enough confidence and strength to write the above commitments in the contract, which is also proof of the rise of the Ethereum mining machine. In the next two years, Ethereum mining is about to usher in a new era. Excitingly, we will be seeing continuous industrial upgrading, and at the same time witness a rising star in the blockchain industry.