SONM, the universal fog supercomputer powered by blockchain technology, has today announced the launch of its alpha version with Docker containers support alongside its first live implementation with popular first-person shooter video game Quake 3. SONM is now supplying supercomputing power generated from miners all over the world to ZeniMax Media-owned Quake 3’s online server, letting gamers join multiplayer campaigns in the decentralized network. The launch comes ahead of the company’s Initial Coin Offering (ICO), which will commence June 15, 2017 and conclude July 15, 2017.

SONM CEO Sergey Ponomarev said: “SONM is proud to bring Quake 3, a classic game first launched in 1999, into the innovative and future-focused realm of blockchain technology and decentralization. Deploying Quake 3’s multiplayer online gaming server in our network is an excellent first application for the SONM platform’s Software-as-a-Service (SaaS) support, which is designed to accommodate a wide range of industries and purposes, from hosting applications and websites to CGI to science projects.”

As a decentralized blockchain-based network, SONM lets miners profit from the otherwise wasted computing power generated by their idle smart devices. By installing and launching the alpha version Docker container on their machine, anyone located anywhere in the world can join SONM’s fog supercomputer network and become a miner.

“SONM is like AirBnB for computers, letting anyone with a smart device, like a laptop, smartphone or gaming console, take advantage of their unused computing power by joining the SONM Application Pool and selling it peer-to-peer,” said Sergey Ponomarev.

The fees paid out to miners are managed by the SONM Hub and based on the time their machines spend executing computations. In this initial alpha version, SONM will not performance check miners’ machine hardware. The alpha version can be run on Linux-based systems and Windows systems using virtual machine software.

SONM’s platform offers an out-of-the-box solution for easily integrating and exchanging in-game currencies, opening up the opportunity for the $108.9 billion USD* online video game industry to become viable cryptocurrency market. For example, SONM can enable gamers to support their favorite game servers by providing their computing resources in exchange for tokens or in-game currency, which could be traded for fiat currency, bitcoin, and other cryptocurrencies.

Sergey Ponomarev said: “Cloud computing has long been held on a pedestal when it comes to SaaS implementations. However, as it’s designed with scientific software rather than commercial use in mind, it remains a weak point in grid computer systems. Distributed fog computing, which designed to be universally applicable for all industries and purposes, is an ideal alternative for organizations looking to reduce costs and strengthen their grid.”

SONM will launch its Initial Coin Offiering (ICO) on June 15, 2017 and issue tokens of the same name on the Ethereum blockchain. SONM tokens will be used by buyers of computing power to pay for the calculations executed via the smart contracts-based SONM platform. Tokens will be created exclusively during the crowdfunding period. No token creation, minting or mining will be available after the crowdfunding period. The funding cap will be confirmed according to the ETH/USD conversion rate before the ICO begins. A progressive bonus structure will exist for the first 70% of tokens sold in the ICO.

Investors can participate in the SONM ICO using BTC, ETH and other major cryptocurrencies. The SNM token basic price is 1 ETH = 606 SNM. The amount of SNM tokens to issue for the other cryptocurrencies (except Ethereum) deposits will be calculated according to the current exchange rate of this cryptocurrency in Ethereum.

More information, the SONM whitepaper and business overview are available at sonm.io.

SONM (Supercomputer Organized by Network Mining) is a decentralized worldwide fog supercomputer for general purpose computing from site hosting to scientific calculations. SONM company is an effective way to solve a worldwide problem – creating a multi-purpose decentralized computational power market. Unlike widespread centralized cloud services, SONM project implements a fog computing structure – a decentralized pool of devices, all of which are connected to the Internet. 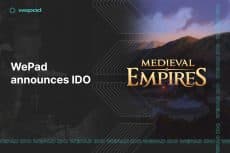