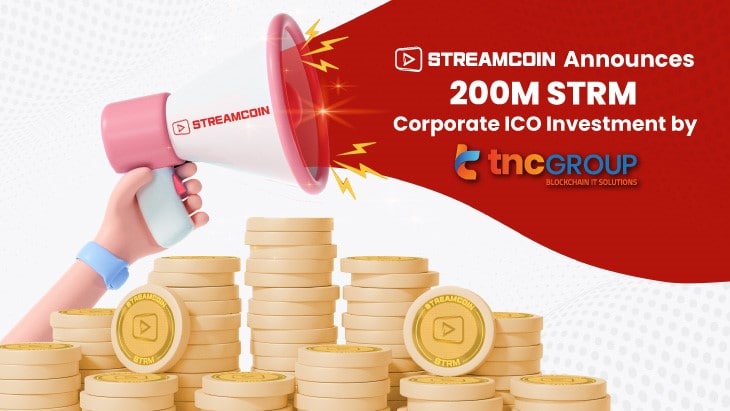 StreamCoin revealed that it has secured a corporate ICO investment from blockchain consulting firm TNC IT Group. Specifically, TNC IT Group has purchased over 200 million STRM during the recently-concluded STRM public sale.

The announcement came after StreamCoin revealed that it has raised more than $11.7 million during its three-month public sale, enabling the team to exceed the STRM soft capitalization goal of $11,250,000.

StreamCoin’s friendly rapport with TNC started when the latter organized the simultaneous World Live Streamers Conference (WLSC) and World Metaverse Conference (WMC). The back-to-back conferences, which were held from March 25 to 26, 2022, saw the participation of over 30,000 people – both at the Festival Arena in Dubai, UAE and virtually.

During the said events, StreamCoin actively supported the organizer as one of the Platinum Sponsors. StreamCoin CEO Michael Ein Chaybeh was also given the honor of delivering the welcome address, on top of other on-stage appearances. In addition, StreamCoin’s multi-streaming platform MeiTalk sponsored the MeiTalk Top 100 Influencer Awards.

Michael commented on the TNC investment:

“StreamCoin is known as a prime mover in the live streaming industry. This recent investment made by TNC only goes to show how much potential they see in StreamCoin, and for that, I am truly grateful. This also bears testament to the friendship and understanding that we have developed over the months.”

“Since our correspondence earlier this year, we at TNC IT Group have seen tremendous potential in StreamCoin in revolutionizing social media, particularly live streaming. It is our mission to look for promising companies to support, and StreamCoin is definitely one that exhibits all of the qualities we are looking for in a partner company. We look forward to more fruitful collaborations in the future.”

Meanwhile, StreamCoin announced the multiple listing of STRM on more than 100 cryptocurrency exchanges. Alongside this, the company has launched STRM Staking, an online portal where STRM holders will be able to earn interest in GaStream (GSTRM) when they stake their STRM. Furthermore, the company will also provide a swapping service via Stream Bridge.