In celebration of StreamCoin’s first anniversary, the live streaming company extended its gratitude for everyone’s support of the company and respective projects. In honor of this occasion, StreamCoin shared a blog chronicling its achievements from its founding until now. 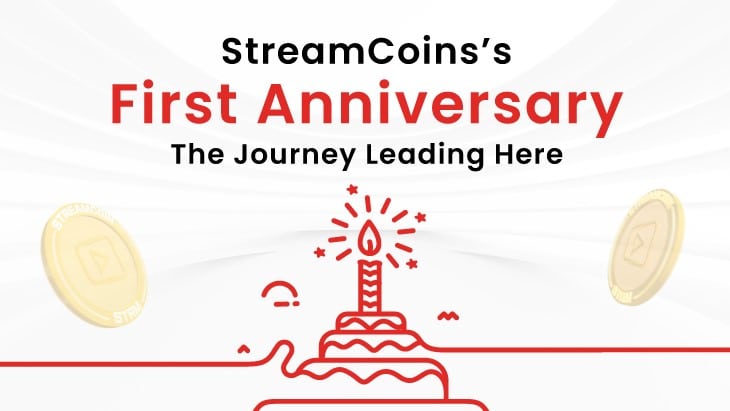 From August 1, 2021, until early 2022, StreamCoin was at its founding days – which focused on development and partnerships. StreamCoin began when the founders – a motivated team of developers – thought of the idea to combine blockchain technology with live-streaming and NFTs. Therefore, in the months following its founding, StreamCoin worked on developing its technology and ecosystem – which led to projects such as MeiTalk, STRMNFT, and Stream Chain (Mainnet 1.0).

More than that, StreamCoin also started building partnerships in the blockchain industry. The platform chose its partners strategically to ensure the global adoption of its ecosystem. As such, StreamCoin partnered with many blockchain and live streaming platforms. The platform’s partnerships with live streaming platforms also contributed to MeiTalk’s integral multi-streaming feature.

Finally, StreamCoin established one of its most important partnerships with Real Research, a blockchain-based survey application with over 4 million users across 165 countries.

Then, from March 2022 until May 2022, StreamCoin was busy with big launches, more partnerships, and token burnings. In the middle of March, StreamCoin launched GaStream (GSTRM), a utility token airdropped to public participants and listed on multiple exchanges. StreamCoin also concluded a public sale that raised $11.7 million with a corporate ICO participation from TNC Group of 200 million STRM. Additionally, during StreamCoin’s seed funding and public sale, they burned through 50% of STRM by May 6.

Most notably, StreamCoin had a platinum booth at the World Live Streamers Conference (WLSC) 2022 in Dubai, UAE, given its sponsorship of the event. During the WLSC, StreamCoin launched MeiTalk’s Alpha Version to 30,000+ WLSC attendees and made the platform available to try and multi-stream to YouTube, Instagram, and Twitch. Additionally, the new NFT Marketplace, STRMNFT, was available for preview at the StreamCoin booth to try the minting feature.

From May 2022 until now, StreamCoin reached new heights and broke industry records. Most notably, STRM was simultaneously listed on over 100 exchanges, breaking industry records. StreamCoin also launched the STRM Staking portal which offered up to 700% returns in GSTRM; the Stream Bridge Swapping Service which made STRM cross-chain compatible with five different blockchains; and finally STRMNFT, StreamCoin’s new NFT marketplace.

The launch of STRMNFT before the end of May allowed users to temporarily mint NFTs for free. Once July came, the first NFT sale on the platform commenced with the Lady Ape Club (LAC) NFTs. This collection of 9,000 NFTs was sold out within four hours – breaking another record in the industry.

Plans for the Second Year

Now, as StreamCoin has reached its 1st anniversary, it plans on continuing with the momentum it built from the previous year. StreamCoin plans on improving and growing the current StreamCoin ecosystem and implementing new features for its users’ benefit.

StreamCoin will further improve STRMNFT by improving user experience, adding new features, and opening the platform for all creators to create, trade, and collect NFTs.

The development of MeiTalk also continues in line with StreamCoin’s roadmap.

Finally, in August, StreamCoin will begin burning 50% of STRM tokens that have accumulated from its monthly services fees. Every burning will be announced on the StreamCoin official channels.

To learn more about the StreamCoin ecosystem and see the roadmap, visit the official website.