Introduced by BitCoke, Quanto Swap is a dual-currency trading product ( I.e. The BitMEX ETH/USD perpetual contract is denominated in US dollars and is eventually settled in XBT). The trading involves the conversion between three different cryptocurrencies. The BitCoke Quanto supports four cryptocurrencies, namely BTC, ETH, EOS, and USDT, as the settlement asset and can also be used as deposit, which means that users can trade all five contracts at the same time.

TokenInsight conducts a comprehensive test of BitCoke exchange Quanto Swap. As the report shows, the BitCoke BTCUSD contract’s trading volume is credible, and there are no wash trading activities. The data shows that the Bitcoin daily price range on BitCoke is better than the industry average by more than 75% of the time.

According to the report, BitCoke has four advantages besides the product itself. 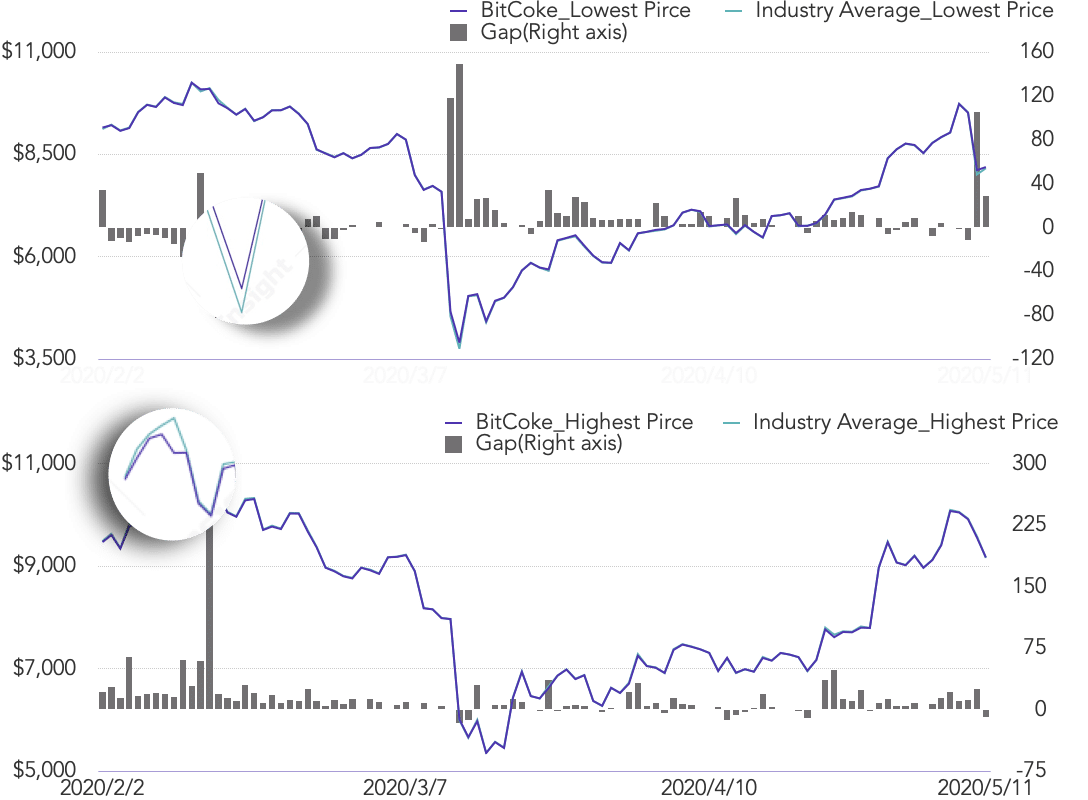 TokenInsight collected the orderbook depth of BitCoke BTCUSD contract (20 levels), via BitCoke official REST API. The analysis shows that the depth of the two-way market of the BitCoke BTCUSD contract trading order can be maintained at more than 2 million US dollars for a sufficient time. It can meet the needs of users and a certain number of quantitative trading teams to trade in and out with large positions, demonstrating sufficient liquidity. TokenInsight also collected the first 1,000 trading records for the BitCoke BTCUSD contract from 17:00 on May 13, 2020, and applied its own real trading volume analysis model to perform real trading volume analysis. The results show that BitCoke’s trading data follow the power law distribution and have an obvious integer effect, so based on the analysis, BitCoke’s trading volume is highly reliable.

BitCoke’s KYC program requires the user to upload user information, a valid photo ID, and take a photo with the user holding his (her) ID for authentication. The actual test shown that BitCoke’s KYC audit is strict, and it will not been accepted if the ID document is not completely visible in the picture. The end to end KYC process takes about 30 minutes, which is significantly better than the 24 hours officially timeline published by BitCoke. BitCoke’s KYC rules highlight rigorous compliance awareness . Users’ transactions, OTC and transfer operations must be certified by the KYC compliance team before they can be performed. Most of the exchanges in the industry usually only requires KYC certification for OTC trading and withdrawal of funds. This setting effectively prevents users who do not meet the trading requirements (such as under 18s) from conducting trading activities.

The popularity of BitCoke Quanto Swaps is rising up rapidly. However, it still needs more tests and further market research. Cryptocurrency derivatives sector is developing, and exchange with products that value user experience may play a decisive role.