UOS is the token that empowers the whole Ultra ecosystem and shares revenues efficiently and fairly across developers, influencers and players. All purchases of games, virtual items and services within the ecosystem requires the use of UOS tokens. This includes features such as loyalty programs, advertisements, trading of digital goods and so on. All transactions are completed on the blockchain with Ultra tokens which will cause a constant demand for Ultra token as the ecosystem grows.

Ultra will also accept traditional forms of payment such as Paypal and credit cards. Fiat currency enters the system and is converted to UOS on the backend. It is done by purchasing UOS from token holders on the open market and then send it to a smart contract to complete the intended transaction for the user.

This fiat-to-UOS conversion process is fully integrated in Ultra to provide a seamless user experience. All this is carried out with minimal friction and without the user noticing that blockchain technology is being used. The token is also used across the platform for non-purchase related transactions including through our stacking program, betting applications, tournaments, tipping and many more.

Ultra is designed as a self-sustaining ecosystem, different actors are Incentivised to use their tokens through different channels adapted to their particular needs. It’s being utilized as a medium of exchange to its full extent for each and every action that could benefit from blockchain technology within the Ultra platform.

No matter if it’s used by a developer, a player or an influencer, all actors utilize UOS tokens to interact within the ecosystem.

Below is an overview of some of Ultra token mechanisms and how they interact within the ecosystem. As the product and ecosystem evolves, Ultra expects additional use cases for UOS to emerge either through its own development or through 3rd party developers.

Ultra will encourage all use cases that increase the alignment between all actors, including our token holders.

5% of Ultra’s profits will be reserved for 2 years to fund exclusive games that use its blockchain and NFTs capabilities. This reserve enables Ultra to continually build out the games portfolio which is valuable to all actors in the ecosystem. This leads to a situation in which demand is bigger than supply for the time being.

Obviously, the locked tokens will come back into circulation at a later time, but when Ultra achieves constant traction on the platform with a healthy growth rate, then there will never be a stage of equilibrium for supply and demand.

Developers can create NFTs in a very simple way using “Ultra Dev Center” our developer back-office tool. With its powerful SDK, these NFTs are ready to be easily integrate in their games.

With the introduction of crafting, Ultra introduces a new income stream for them; They can “fuse” UOS tokens within their NFTs to guarantee an inherent value, which is at least the value of the fused UOS tokens. At any time, the owner of this NFT can “break” the NFT to get its contained UOS tokens back..

Fusing UOS to an NFT not only guarantees floor price for players, it also guarantees that developers will generate more revenue in the second hand market; When developers believe they have items that will be traded a lot, they have an incentive to create those items and lock UOS tokens in then because they will receive a sales revenue share every time this item is resold in game or on item trading platforms.

Ultra aims to create a beneficial ecosystem for players as well as developers. To ensure this, Ultra provides players with diverse ways to easily and instantly earn UOS tokens. Everyone can earn tokens by engaging on the platform in various ways.

Players may also be able to earn UOS by helping developers to build better games through such opportunities as watching ads, participating in beta tests, answering surveys, and much more.

Actors within the Ultra ecosystem can be rewarded with free games, swag and exclusive content by holding UOS tokens.

Our staking feature forms a perfect synergy with our engagement rewards, as users can constantly increase their token stake through engagement activities and by holding these tokens they’ll earn even bigger rewards.

Earn tokens on the Ultra platform or buy and sell games, services and digital items for UOS tokens and spend them in thousands of stores around the world through exclusive partnerships.

The Ultra ecosystem is designed in a way that developers are incentivized to keep a portion of their revenue within the ecosystem.

For example, developers can spend UOS to improve their games and communities such as reinvesting their revenues into advertisement or forging unique and valuable virtual items for their players. Furthermore, all developers can directly decide how much of their revenue should be distributed to the publisher and to influencers who create additional sales of the game by advertising it for them.

Instead of having to wait for up to 60 days like traditional platforms, developers get paid with UOS tokens instantly on every sale and can directly reinvest their profit at times when it’s needed the most. 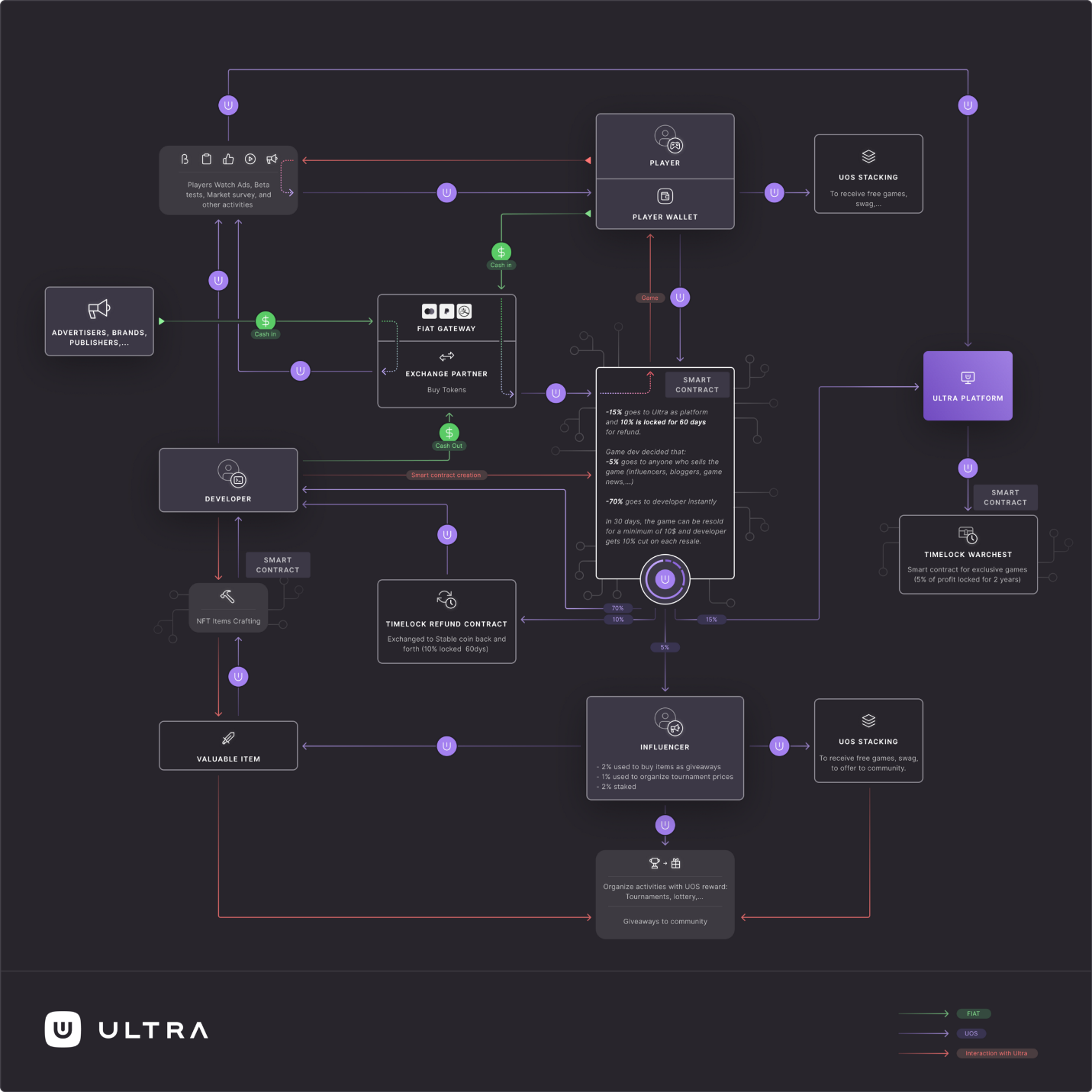 What is demonstrated in this example, is rather simple.

Starting from the player that bought a game from the smart contract (created by the game dev), it splits revenues among a multitude of actors (Game devs, Influencers, Ultra…), that will use UOS to perform different actions. In addition more smart contracts (War chest, Timelock refund…) are getting in the way of the token as it progress in the system.

Ultra ecosystem, even in this short example, is achieving a really strong token retention, even in what will be “Ultra core”, that is the first version of our ecosystem.

As Ultra is designing and developing new concepts and smart contracts, that will make its token and ecosystem even more useful, simply by having new features that add value to its ecosystem and that serve well any type of actors from the gaming ecosystem, and beyond.