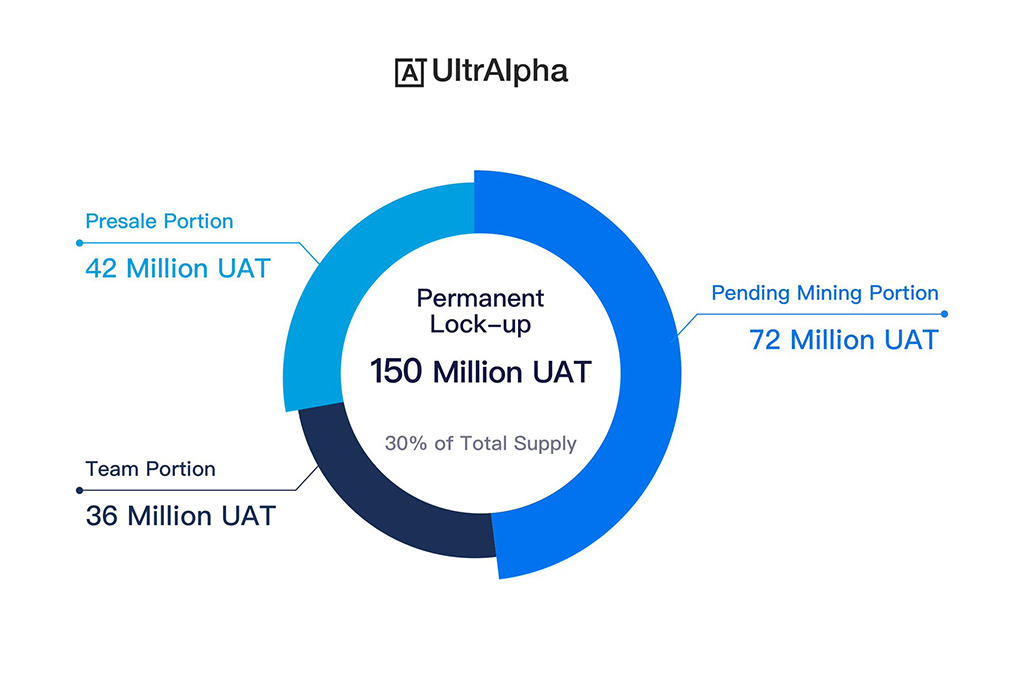 The team leverage their well-rounded industry experience in the selection of quality products and the offering of value-added services towards users. For the design of toke economics, they have conducted industry research and incorporated many best-practice features with the aim to effectively balance supply and demand and support token value on the longer term basis. The permanent lock-up of 150 million UAT tokens indicates that part of this control mechanism is being implemented.

To further explain the details, UltrAlpha (UAT) will permanently lock up 150 million UAT tokens (30% of total supply) from the pending release portion per following schedule.

The remaining pending release tokens are also on schedule to be unlocked and released. For every UAT mined, one UAT will be released and unlocked from presale portion and half UAT from team portion. And every time when UAT is listed on a certified top-tier digital asset exchange or trading platform, 5% of presale portion (approximate 10 million UAT) will be subsequently unlocked and released. Following the release ratio, respective tokens from pending mining portion and team portion will be subject to permanent lock-up.

From token economics perspective, this move to permanent lock-up of 150 million UAT will effectively reduce the overall supply of UAT in circulation and support overall long-term holding value.

Furthermore, the economic value of UAT is tightly integrated with various utility functions on the platform which has built-in deflation mechanism. Every transaction fee for all services on UAT platform will be paid in UAT token, subsequently subject to permanent lock-up. For each investment product from 3rd parties, 10% of net trading PL will be set aside to purchase UAT from secondary market in support of ecosystem development.

In summary, the 150 million UAT permanent lock-up is expected to have positive impact on the development of UAT token value with less circulation supply. As the user demand for UAT token increases along with the continuous expansion of third-party investment products, this strategy has successfully laid out a solid foundation for future growth of UltrAlpha service platform over longer term in the ever changing digital asset industry.