Unstoppable Wallet is one of the newest and lesser-known wallets in the ecosystem. It was the latest mobile-first wallet to be added to bitcoin.org wallet list.

As there were only a few non-custodial mobile wallet apps back in 2018, leave alone natively built for mobile, we decided to build a wallet app everyone would enjoy using. The idea to develop a non-custodial wallet provided an opportunity for us to master blockchain tech in-depth and right from the start we were set on a mobile-first approach.

While there is general consensus that non-custodial mobile wallet apps are theoretically less safe than cold storage wallets we believe they are secure enough for most of us. Hardware wallets are lagging behind on usability and natively not designed for frequent access.

Our intention was to have a wallet that’s easily accessible by the masses, fully non-custodial and secure from hackers, governments and regulators. Keeping above in mind, primary requirements for the wallet architecture were to ensure anyone and anywhere in the world is able to access cryptocurrency markets 24/7, trade assets privately and benefit from available decentralized finance services without any limitations.

Conceptually, we tried to address three core issues for users entering the ecosystem to invest in cryptocurrency for the first time:

So, our intention has been to have a single instrument from where a prospective investor can safely store cryptocurrency, trade cryptocurrency and discover emerging projects while staying private and retaining full ownership of the assets.

We believe the wave of global crypto adoption will bring a wave of mainstream investors into the ecosystem which will need easy-to-use, well-built instruments that keep complexities under the hood while providing users with a single tool for their needs. 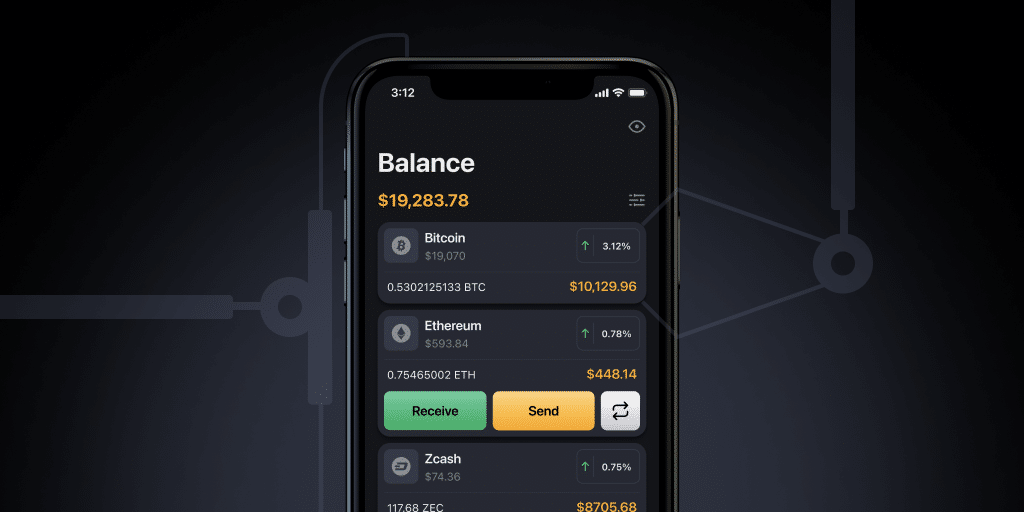 Starting in early 2018 our first 2 years were mostly spent on enabling the wallet to store any cryptocurrency token.

Our team is no stranger to building complex software but the wallet app turned out much more sophisticated task than initially expected: what initially seemed like a 6-12 months task for our 16-people engineering team quickly expanded and still work in progress after individual 100,000 development hours)

There were few libraries for Swift and Kotlin in 2018, even for some of the fundamental building blocks. So, the very first thing we had to build was light client (SPV) Bitcoin libraries for iOS and Android which is a fairly significant task on its own. In about 6 months we had them ready and available to serve the open-source community for iOS and Android.

It started with Bitcoin and as we progressed new blockchains were added the list of supported currencies steadily grew. Today, Unstoppable is one of the very few wallets that implements trustless communication for most of the major blockchains including Bitcoin itself as well as privacy coins like Zcash and Dash.

Unlike most of the custodial as well as non-custodial wallets, Unstoppable uses trustless communication protocol (the way it is supposed to be) with the blockchains for most cryptocurrencies it supports.

For instance, the latest release introduced support for storing and decentralized trading for crypto assets on Binance Smart Chain making Unstoppable one of the very first wallets to be able to do so.

In the coming releases, we are looking to add full support for Polkadot, Solana, Monero, Avalanche, Cardano and other emerging blockchains. 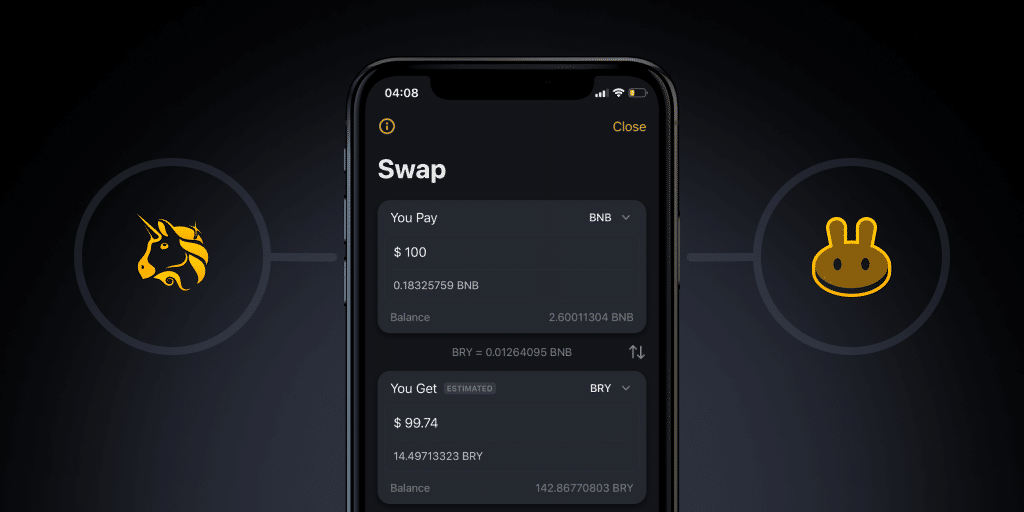 While many wallets have some kind of trading/swapping capabilities most of them use centralized service providers to execute trades. Therefore, many users in those wallets are not able to use these features due to regulation, while those that are able to lack privacy and are required to go through identity verification mechanisms for a large trade.

Driven by decentralization principles we chose to integrate only blockchain-based decentralized cryptocurrency exchanges. This allowed wallet users to remain private and be able to store and transact in any supported asset from anywhere, without regulatory limitations. We could have easily integrated one of the leading centralized exchanges but that would neither be private nor accessible to all users.

Over the last 6-12 months, we enabled Unstoppable users to trade cryptocurrency assets in a decentralized manner both on Ethereum blockchain and Binance Smart Chain using Uniswap and Pancake decentralized exchange protocols, respectively.

The introduction of the above-mentioned features enabled Unstoppable wallet users not only to store assets but also to trade them in a permissionless and trustless manner. Users never reveal their identity to anyone and have unconditional access to crypto markets 24/7.

Not all assets in Unstoppable can be traded in a decentralized manner yet and this is something we continue working on. As the army of open source engineers working on various parts of the ecosystem, we are staying tuned. When new solutions arrive we will be among the first to integrate them until any supported asset in the wallet app can be exchanged for any other.

The integration of decentralized swaps also meant enabling Unstoppable wallet users to engage with Decentralized Finance (DeFi) services. No need to switch wallet or use any other third-party tools i.e. Metamask browser-based wallet. 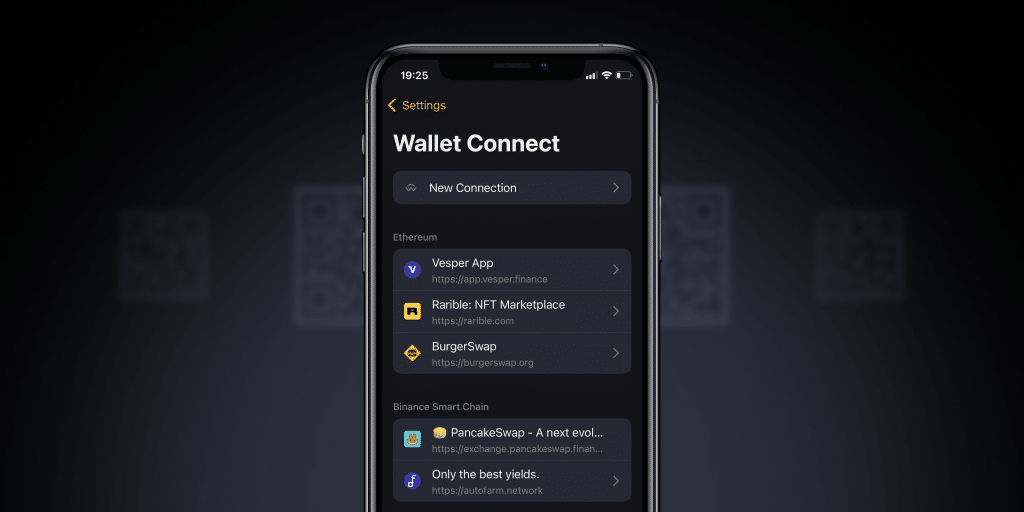 Today, Unstoppable wallet users may easily and securely connect their wallet app to any DeFi service website with a click of a button via WalletConnect feature in the wallet settings.

By integrating these features Unstoppable also became one of the first DeFi friendly wallets in the ecosystem. In the coming months, we intend to expand the DeFi feature set further going far beyond cryptocurrency trading. So, stay tuned! 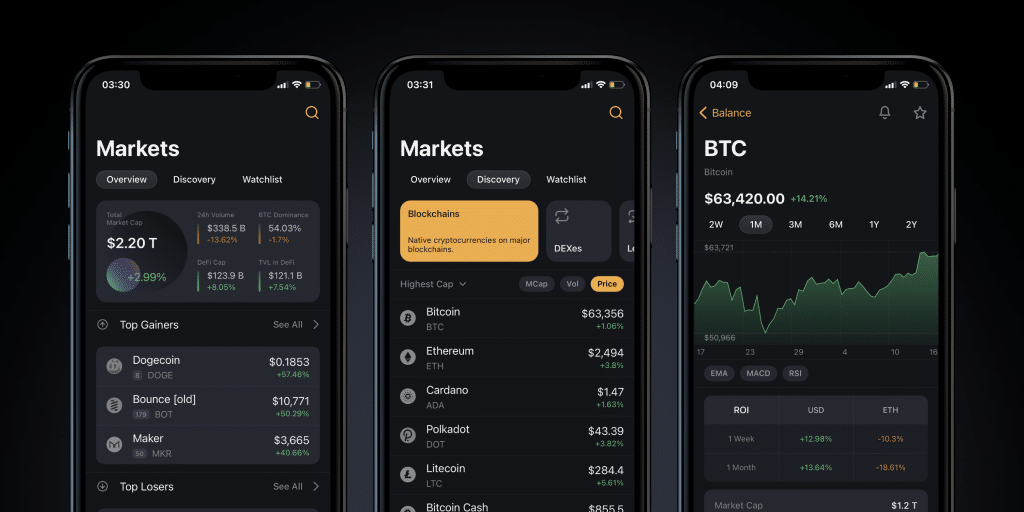 As we have addressed the primary issues of storing and exchanging cryptocurrency in a decentralized manner we were finally able to focus on the discovery and analytics of cryptocurrency markets. As mentioned earlier, right from the start there was a growing need for analytical and discovery research tools that would help make sense of the growing number of emerging cryptocurrency projects. 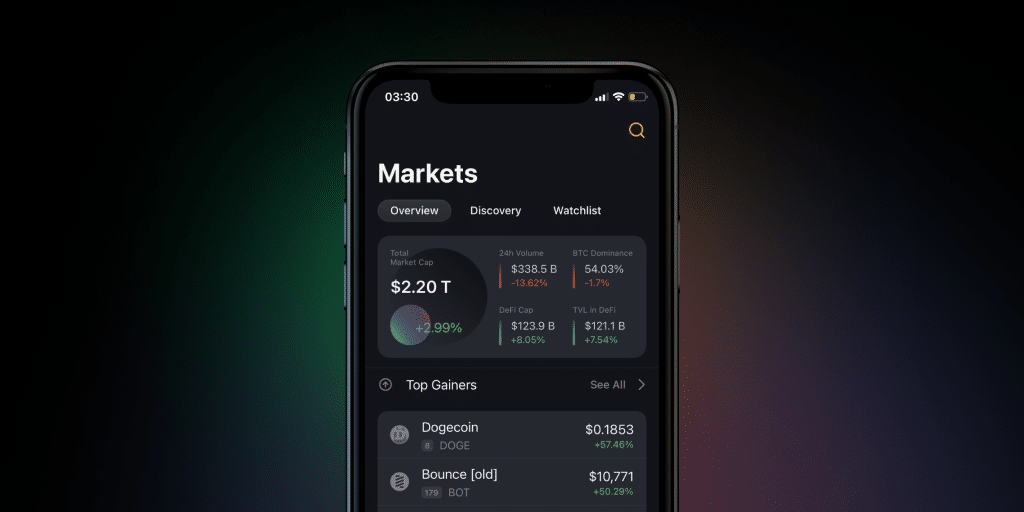 The release of the Markets feature was a major milestone for us. And due to the recent hype it also recently became one of the most requested features from our user base.

The Markets feature solves the fundamental problem for anyone investing in cryptocurrencies allowing to easily analyze, filter and compare different cryptocurrency assets in an easy manner.

While there is no shortage of such instruments in the traditional markets there are very few for the crypto ecosystem. Those that are currently around i.e. coinmarketcap.com or even some of the premium ones are limited in scope. We wanted to build market discovery and analytics like no other, available both in-app as well as as a website (coming soon).

At its core, using this market’s feature anyone can get a detailed summary of the entire crypto market over the last 24 hours. We also filtered and categorized somewhat better projects into various sectors allowing anyone to compare projects by various criteria within a given category.

More importantly, we designed a custom algorithm that evaluates blockchain and exchange data on selected cryptocurrencies and assigns A/B/C/D rating to the given cryptocurrency token to reflect the level of investment risk for that token.

The latest Unstoppable release brings the first version of the Markets feature which will be built upon in the coming weeks.

We invite you to give it a go, there is a good chance you will be using it again)

So, that’s what kept us busy the last few years. We still have a lot do and in case you’re interested below are some of the main tasks on our roadmap for the next 6 months:

If you have any major features in mind feel free to reach out over email or Reddit. If you have submitted a feature request earlier rest assured that it’s being handled. That’s a brief story of Unstoppable. We hope to enjoy using an Unstoppable wallet as much as we do.

Unstoppable Wallet is one of the newest and lesser-known wallets in the ecosystem. It was the latest mobile-first wallet to be added to bitcoin.org wallet list.

One of the cryptocurrency wallets that has passed open-source verification.

There seems to be a lot of public interest when companies put cash into Bitcoin and perhaps folks might be interested to hear a story from builders in the wallet space. Instead of cash we put our time into it. We also spent about $1.5-2 million in operational costs during this time to sustain a 16 people team.

With over $2 billion invested in Bitcoin in 2021, Phong Le said he is unsure whether the company will make more acquisitions this year than it did in the previous years.