Check out the report jointly created by OK Blockchain Capital and Coinspeaker covering main trends of blockchain industry over July 14 – July 22, 2018, with strong focus placed on the market overview, analysis of the newly listed and closed public sales projects, along with topical news on global governmental policies.

This week, the market became more bullish with the BTC price raising to $7000 support. We observed that the risk preference increased in the past week. We also closely followed the new trend in the blockchain industry — “Trans-fee Mining”. We are going to introduce the concept of “dynamic mining difficulty” in this report.

OK blockchain capital is committed to exploring the cutting-edge technology of blockchain, setting benchmarks for high-quality analysis, guiding the sound development of the industry. Follow us on medium, to get more  articles.

Of the top 10 cryptocurrencies that increased this week, 50% of the projects were of the vertical industrial application sector. Also, RBLX of the basic chain and protocol sector experienced the greatest increase in price by 128.74%. 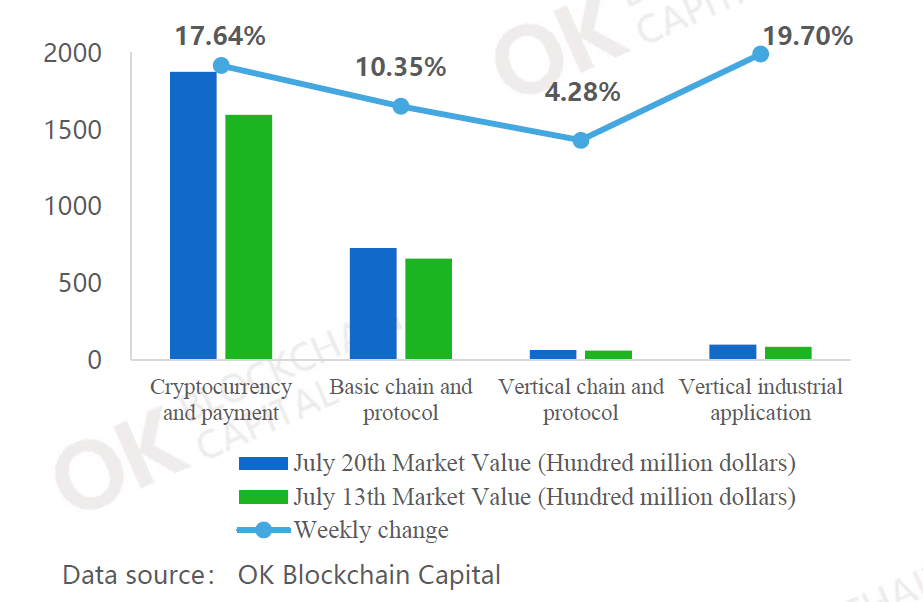 Through further classification of the vertical chain and protocol and the vertical industrial application categories, it was found that this week’s tourism and exchange platform token verticals were on obvious increases at a rate of 35.65% and 31.79% respectively. The E-commerce and transportation verticals experienced the greatest decreases with the rate of 9.01% and 2.33% respectively.

There were 14 new projects in the market last week (mainly of the content copyright vertical), 78.57% of which dropped in price within 24 hours of listing. Most of the newly issued tokens were listed on Gate.io and BitForex.

Below is a list of some of the most important global news on governmental policies on blockchain and cryptocurrency. The picture below is for reference to how strict/loose some countries are with their regulations. 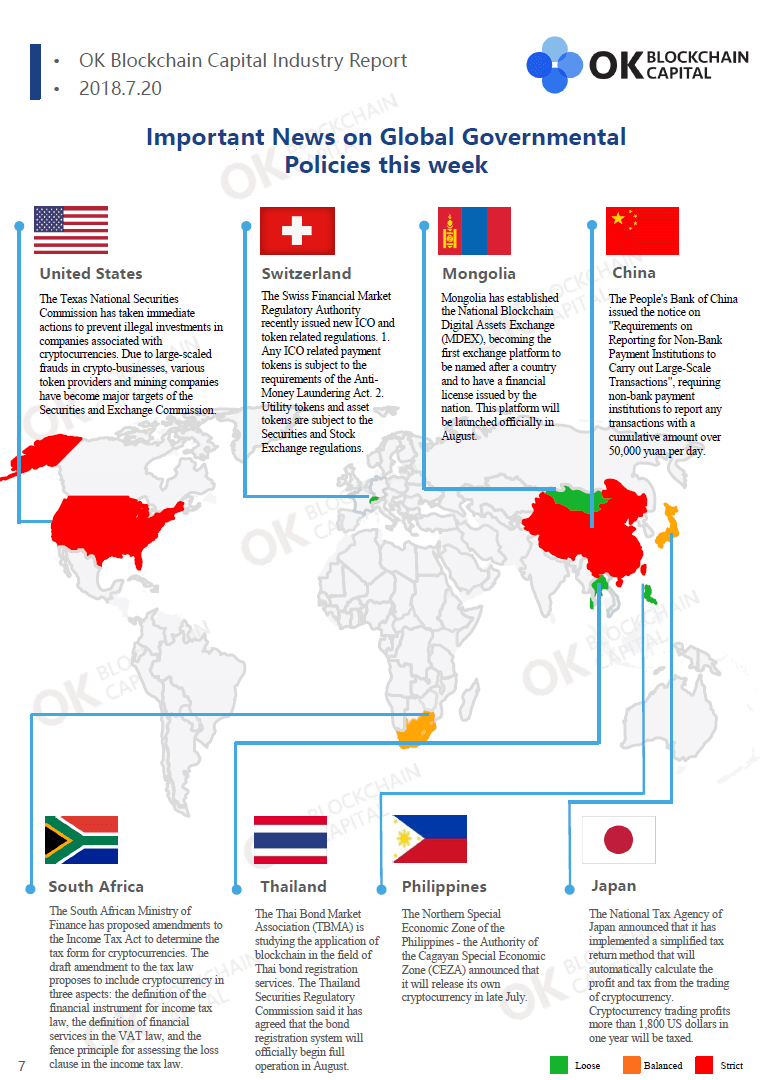 The Texas National Securities Commission has taken immediate actions to prevent illegal investments in companies associated with cryptocurrencies. Due to large-scaled frauds in crypto-businesses, various token providers and mining companies have become major targets of the Securities and Exchange Commission.

The Swiss Financial Market Regulatory Authority recently issued new ICO and token related regulations. 1. Any ICO related payment tokens is subject to the requirements of the Anti-Money Laundering Act. 2. Utility tokens and asset tokens are subject to the Securities and Stock Exchange regulations.

Mongolia has established the National Blockchain Digital Assets Exchange (MDEX), becoming the first exchange platform to be named after a country and to have a financial license issued by the nation. This platform will be launched officially in August.

The People’s Bank of China issued the notice on “Requirements on Reporting for Non-Bank Payment Institutions to Carry out Large-Scale Transactions”, requiring non-bank payment institutions to report any transactions with a cumulative amount over 50,000 yuan per day.

The South African Ministry of Finance has proposed amendments to the Income Tax Act to determine the tax form for cryptocurrencies. The draft amendment to the tax law proposes to include cryptocurrency in three aspects: the definition of the financial instrument for income tax law, the definition of financial services in the VAT law, and the fence principle for assessing the loss clause in the income tax law.

The Thai Bond Market Association (TBMA) is studying the application of blockchain in the field of Thai bond registration services. The Thailand Securities Regulatory Commission said it has agreed that the bond registration system will officially begin full operation in August.

The National Tax Agency of Japan announced that it has implemented a simplified tax return method that will automatically calculate the profit and tax from the trading of cryptocurrency. Cryptocurrency trading profits more than 1,800 US dollars in one year will be taxed.

Xuanya International Blockchain Lab launched its first product “Yes Or NO”, which provides a good market research and market forecasting function, and will be built as a community product that can provide long-term insight into user attitudes and trends.

Remittance company Tempo announced the use of XLM (Stellar) as the underlying token for its digital currency payment network.

Dragon Chain Capital invested in BitForex, with an exchange platform token called BF Token. Dragon Chain Capital has joined strategically and will fully support BitForex to build a new, autonomous, transparent and shared exchange, and jointly promote the development of the blockchain to the 3.0 era.

China Merchants Bank’s subsidiary, CMB International, announced the investment in blockchain and completed a number of equity investment transactions through its funds: including Nervos and Cryptape.

IBM and financial services firm Stronghold launched a stable currency of Stronghold USD linked to the US dollar. This is the first stable coin to use the Stellar Network.

Japan’s fourth largest communications giant NTT applied for a patent for a blockchain protocol system, which can encrypt and distribute contracts and simplify the verification process.

“Trans-fee Mining” is currently a hot trend in the blockchain space. Since May 2018, Fcoin’s “Trans-fee Mining” model has attracted a large number of users. Speculative funds have also quickly moved into the field for arbitrage, and followers have also swarmed into the space. According to some statistics, by June, no fewer than 10 digital asset exchanges implemented a trading-mining mode.

The positive circulation in the “Trans-fee Mining” model depends on the stability or rise of the token price. The operations of the trading platform is generally to provide functions for the demand side, such as support trays, lock positions, and etc. The innovation of CoinEx lies in the production limit of “Trans-fee Mining” from the output end of exchange platform tokens to ensure the long-term sustainable development of the platform.

CoinEx has re-innovated the control of production which was launched on 8:00 on July 12, 2018, Hong Kong time, and revised the typical “Trans-fee Mining” rules. The participation conditions are to complete the real-name certification and lock at least 10,000 CETs, and modify the mining difficulty to: Within every hour, every account will have a mining quantity limit proportionate to its locked CET. The more CETs that are locked, the more CET you can mine within every hour.

Analyst evaluation: CoinEx requires real-name certification and dynamically adjusts the difficulty of mining to limit the amount of mining that each user can mine every hour. The more CETs that are locked, the more CETs a user can mine per hour. By restricting the daily CET output to avoid a large amount of CET dumping, the price of CET is stable. It turns out that out of all “Trans-fee Mining” models, the CET price is the most stable. almost every other exchanges that simply copy the Fcoin model experienced high open and low close price.

Two Prime’s FF1 Token combines the features of a close-ended fund, asset-backed token, and a secure store of value. The token sale will take place not in the form of a typical ICO but as a Continuous Token Offering (CTO).

According to the SEC, the commission and Kik took a total of 11 depositions in the case. The twelfth deposition is scheduled for January 28, 2020.

In a first France, has issued its first “Visa” ICO approval. This came from an ICO that was operated by and applied for on France’s home soil.