Check out the report jointly created by OK Blockchain Capital and Coinspeaker covering main trends of blockchain industry over July 21 – July 27, 2018, with strong focus placed on the market overview, analysis of the newly listed and closed public sales projects, along with topical news on global governmental policies.

OK blockchain capital is committed to exploring the cutting-edge technology of blockchain, setting benchmarks for high-quality analysis, guiding the sound development of the industry. Follow us on medium, to get more  articles.

The past week’s daily average global market capitalization of cryptocurrency was $290.49 billion and the daily average transaction volume was $15.17 billion, indicating an incline of 8.26% and an incline of 8.26% respectively. The daily average market capitalization of the top five cryptocurrencies increased by 8.11% from the previous week. The increases in price of the top five cryptocurrencies was led by BTC, which experienced a price increase of 15.9%, and BCH experienced the greatest price increase by 16.08% in the past week.

Of the top 10 cryptocurrencies that increased this week, 80% of the projects were of the vertical application sector. Refereum, an advertising project, experienced the greatest increase in price by 294%. 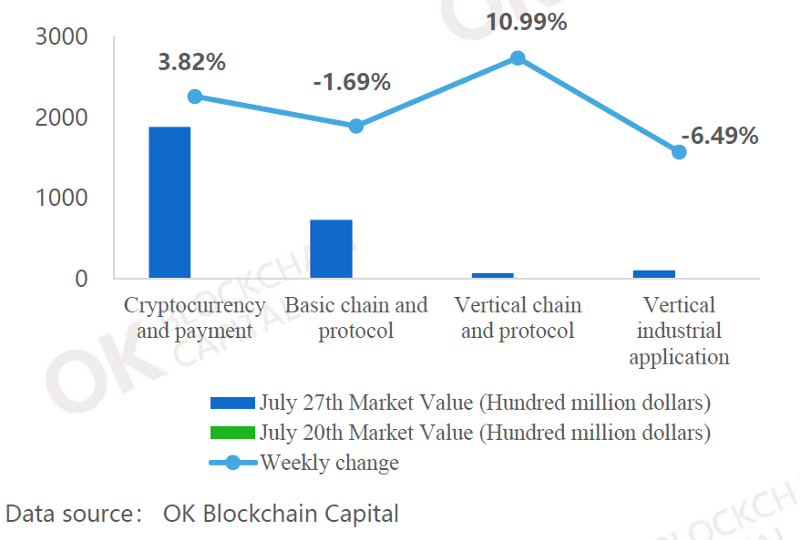 There were 18 new projects in the market the past week (mainly of the advertising vertical), 77.78% of which dropped below issued price within 24 hours of listing. Most of the newly issued tokens were listed on IDEX and Hotbit.
Among the new projects, RTB experienced the greatest increase in price (an advertising project), reaching an increase of 60.14% within 24 hours. VIKKY experienced the greatest decrease in price (a social networking coin), reaching a decrease of 24.99% within 24 hours.

There have been 35 closed public-sale projects this past week, totaling nearly 129 million USD. Among these projects, projects of the social network vertical received most funding. This was closely followed by projects of the financial sector. 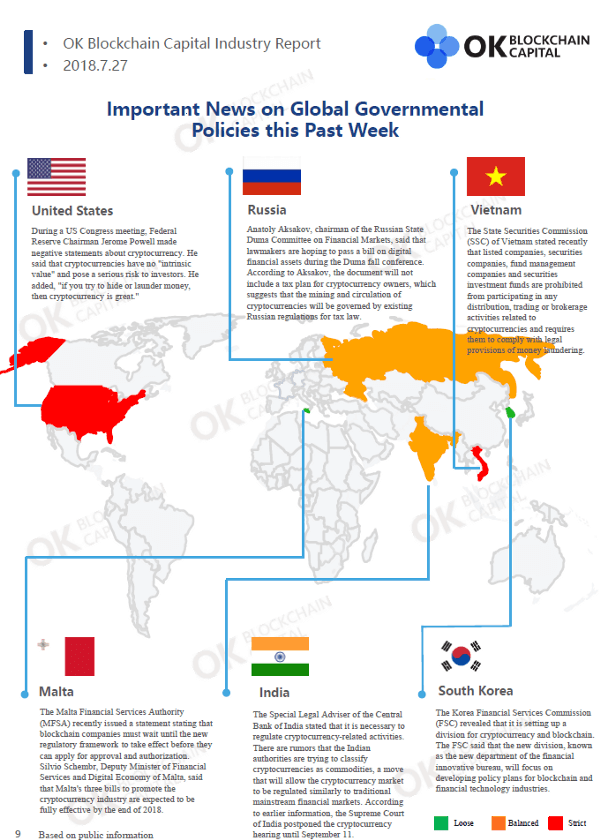 6.Keeping Up with the Blockchain Giants 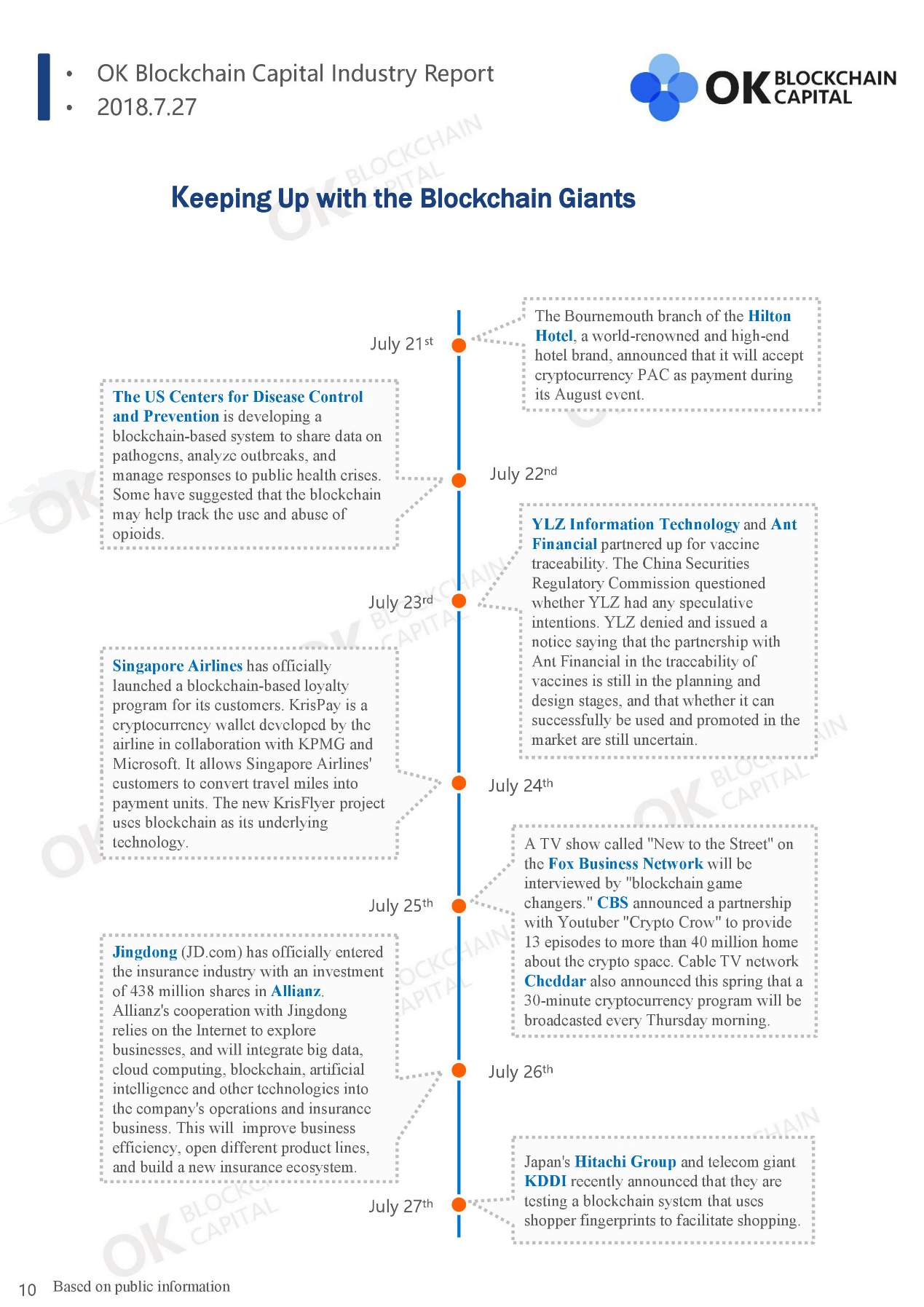 On July 21, 2018, the OKEx General Conference was held in Sanya. The conference was based on the theme of “Sharing, Creating, and Winning”, and included hundreds of blockchain industry elites and hundreds of industry media. Everyone was there to witness the launch of the new win-win strategy. The main contents of the meeting are as follows:

2.The launch of the world’s first OK Partner exchange – CoinAll

CoinAll will adhere to being an open, transparent, and autonomous platform, giving power to the community and sharing profits with the community, thereby making CoinAll the first brand to be a co-creative community and a self-governed exchange.

3.The establishment of a comprehensive digital asset service platform

OKEx Financial Markets Director, Lennix, gave a detailed introduction to OKEx’s exchange products, financial derivatives, and cryptocurrency wallets, and said that with the emergence of specialized and diversified products in the market, OKEx will establish a comprehensive digital asset service platform based on the principle of decentralization and sharing profits and power to all stakeholders.

4.Expansion of complied development of the blockchain industry in the US, Korea, Malta and other regions

OKEx Chief Compliance Officer and Government Public Relations Officer, Tim Byun, presented the global layout and development of OKEx. OKEx has been committed to participating in and promoting the development of the blockchain industry in various countries. At present, the OKEx compliance process has made pioneering progress in the United States, South Korea, Malta and other countries. In addition to applying for local licenses, OKEx is also actively exploring the feasibility of securities tokens with local regulators.

OK Blockchain Capital partner, Jun Yu, announced that OK Group will launch the 10 billion fund of funds, DragonFly, which will be used to invest in elite token funds and quality blockchain projects. Jun also said that OK Capital will partner with other elites in the industry, pool resources together, launch a sub-fund for underlying blockchain technologies, promote the underlying technology behind blockchain, accelerate the efficient implementation of advanced blockchain technology, and finally use the advantages of the blockchain economy to drive the blockchain industry towards more rapid developments.

6.The publication of “Blockchain 3.0: Sidechain and Cross-Chain Industry Trends Report”

OK Blockchain Capital Investment and Research Lead, Zihan Zhou, shared the investment layout of OK Blockchain Capital, and officially released the industry trends report “Blockchain 3.0: Sidechain and Cross-Chain”. The report explains the development of blockchain 1.0 and 2.0 from the two core ideas of “technology” and “economy”. The report’s main views include: “the innovation of blockchain technology primarily focuses on expanding its functions and performances”, “there is a powerful transformation in vertical industrial blockchain”, and “tokenomics creates new rights and new relations”. The development of the blockchain industry has led to the concept of blockchain 3.0, emphasizing the broad use of sidechain and cross-chain technologies. The report provides an in-depth analysis of different projects, core issues, and technical solutions for sidechain and cross-chain technologies. Once the report was released, it was immediately shared by dozens of media channels, which promoted extensive discussions in the industry.

Press Release Bit2Me Raises 5 Million Euros as Phase One of ICO Sells Out in Under 60 Seconds
By Kseniia Klichova September 6th, 2021