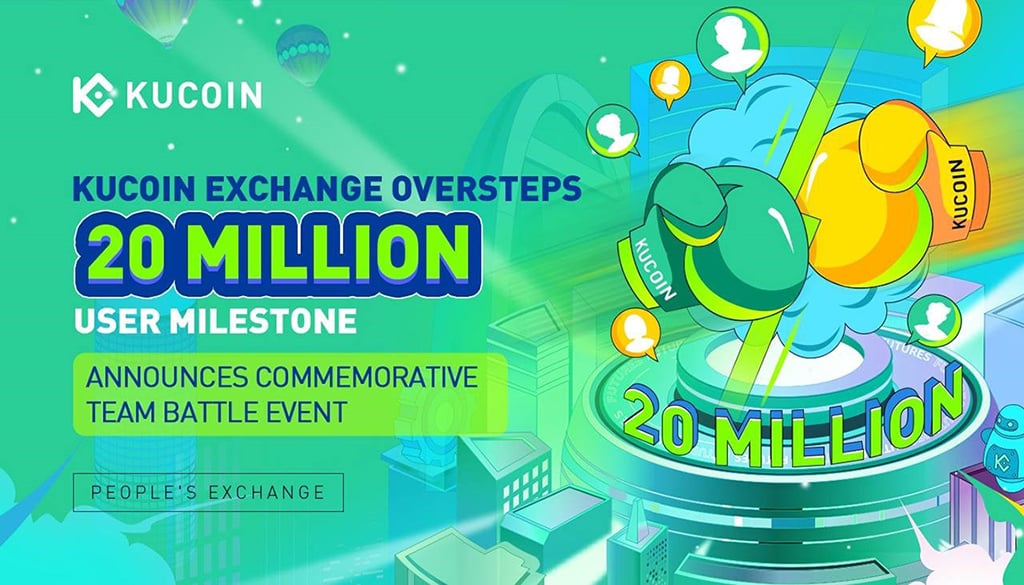 Almost 10 million new users have joined one of the largest crypto exchanges KuCoin, according to the report the company released today. The exchange announced it will be marking the occasion by launching a contest for users, offering generous rewards to all participants.

KuCoin has reported a two-fold increase in new user registrations in the last seven months, a 219% increase year-on-year, bringing the total user base to over 20 million – unprecedented numbers in the falling market. The main regions driving such new user influxes included Asia at a 659% uptick year-on-year. Regions such as America, Europe, Africa and the Middle East trailed in the contribution to the user base, adding 216%, 152%, and 142% year-on-year growth respectively.

To mark the achievement, the platform intends to launch KuCoin Futures Global Team Battle in the upcoming week, offering a $1 million prize fund up for grabs that all willing users can have a chance of tapping by simply joining the event and standing a chance of winning as much as $20,000. KuCoin will be distributing various prizes among participants, including exclusives, such as airdrops, leader bonuses, and much more.

The exchange has been considerably bolstering its native KCC ecosystem in recent months, adding new trading pairs in local fiat currencies. The addition of BRL and EUR as traded instruments in pairs has allowed KuCoin to tap into the Brazilian and European user bases. The releases of new products and innovative services that augment the expanding KCC have also played a major role in bolstering the exchange’s image on the market as an attractive venue for convenient cryptocurrency operations. Ongoing support for localized communities and products is in line with KuCoin’s general globalization strategy.

As a leading international cryptocurrency exchange, KuCoin is positioned to expand its presence across new markets, primarily Europe, South Asia, the Middle East, Africa, and Latin America. The addition of new instruments and support for local communities across social networks and the native KCC ecosystem are serious competitive advantages that KuCoin is leveraging in its expansion in spite of the global economic and cryptocurrency market slumps.

The company’s CEO has not confirmed whether or not he will be making a refund to the affected victims but said as an immediate course of action, the platform has requested all partner exchanges to disable their API keys linking to its systems.

KuCoin cryptocurrency exchange is one of the top ten by daily traded volume with verified reserve information.

KuCoin has announced it will list AirDAO’s $AMB token with a USDT pair on November 9th.