Cryptocurrency market is fully focused on the new ongoing market shaker – NFT. Projects and blockchains which jumped into that snowpiercer are able to enter the spring with massive gains.

Theta, for instance, is gaining for the third consecutive month, starting the fueled uptrend in mid-December last year. Though the uptrend is related to the release of Theta.TV – the video streaming dApp, an impulse of heavier that the previous has started after March 4ths tweet about launching NFTs.

Tokens of blockchains that move into NFTs are gaining momentum nowadays, while the major cryptocurrencies like Bitcoin and Ethereum are mainly traded sideways.

Enjin, besides some artists, was able to pull some notable projects in crypto and beyond to create their collectables and sell items in Enjin’s marketplace, those include CoinGecko, CoinmarketCap, Microsoft and others. Enjin wants to go further and wants to go carbon-free, the project has announced that on April 6 they will launch their PoA blockchain that runs on only 4 nodes and is thought to consume 900,000X less electricity than the Ethereum network. Later this year the project is planning their PoS blockchain Efinity which will incentivise and absorb NFTs from other blockchains. In other words, Enjin is enabling multi-chain interoperability for NFTs.

From the technical outlook current pattern on the 4 chart of ENJ/USD looks very positive for the cryptocurrency.

Currently, ENJ is on a correction mode, and it is highly recommended to watch for important levels since the pair is in the process of completing the corrective wave and is looking to select a pattern. If the pair closes above the dynamic resistance, the uptrend will continue towards $3.25400 and $3.60400. The pair is currently testing an important support at $2.2000, closing below that would bring the price lower to the $1.92 and 1.85 support zone, where the price will complete the flag pattern and retrace immediately. MA50 supports the short-term bearish mood, while MACD and RSI are betting for the bullish run.

The streaming dApp that can brag with its success and the success of its token is Audius which this year will complete its migration to Solana. Another major hit for the crypto is that Solana has integrated the world’s most capped stable-coins – USDT, Tether is natively supported on Solana. With over 120+ projects in the ecosystem, it is one of the projects to keep an eye on.

Another reason to keep an eye on Solana is the SOL/USD pair.

EOS – the blockchain that had an NFT marketplace built on it’s blockchain long before the craze. It has been almost a month since the major update of the EOS mainnet to 2.1, no significant updates were made by the project, although there are several NFT market places that use EOS to mint and trade NFTs, one of them is a consortium of marketplaces, a sort of interconnected marketplaces named Atomic Hub, where tokens on EOS blockchain are available to trade and mint.

If correlated to the other two cryptocurrencies reviewed herein, EOS is the least performing. The beginning of the month was positive for EOS since the price started an uptrend move and continues climbing higher inside an ascending channel. 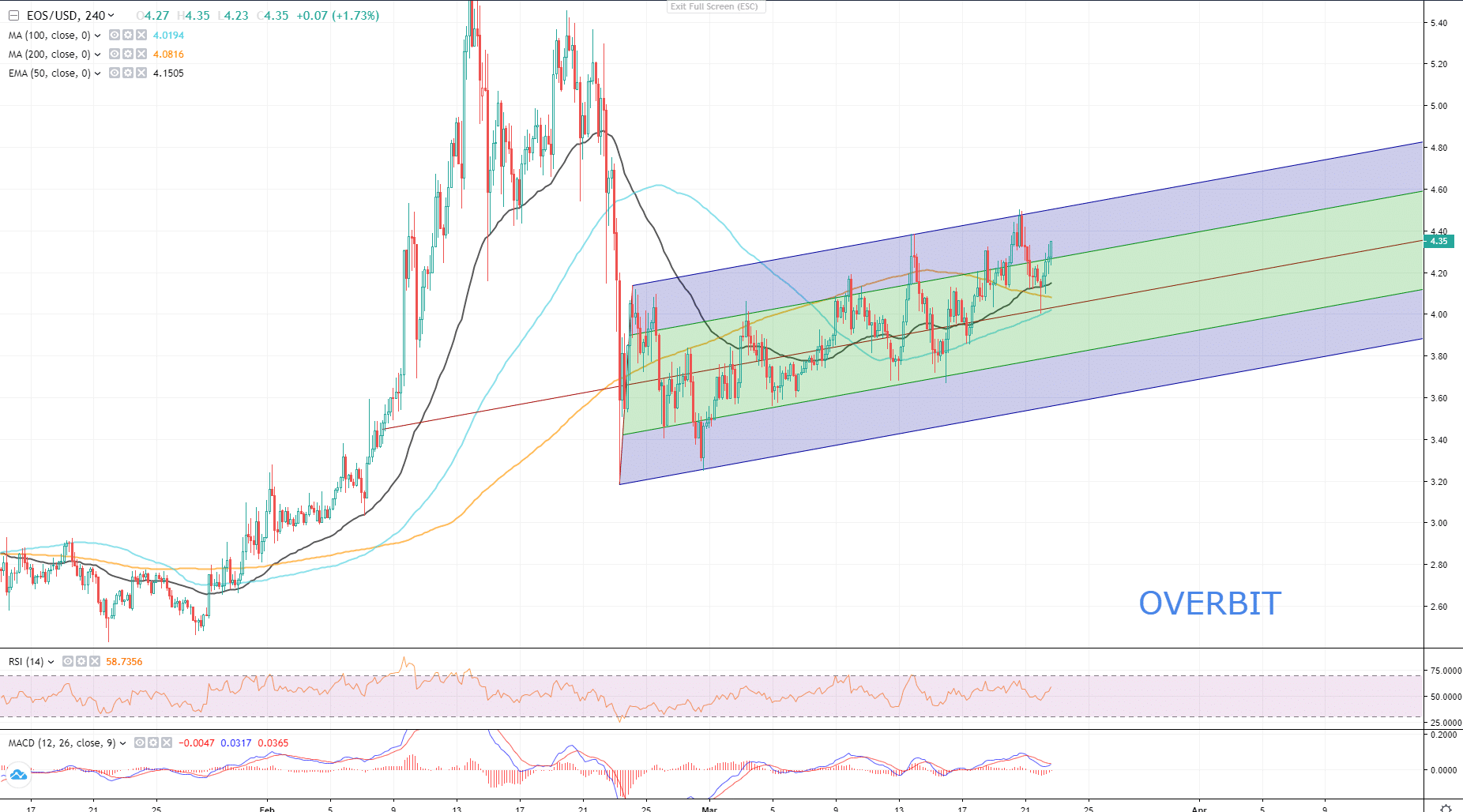 As seen on a 4H EOS/USD chart above, there are multiple supports which signal the bull run of EOS. MACD is close to the signal line, RSI is slightly above the 50 points, so there is no signal of the asset being overbought. Moving averages congregated in one area to finally push the EOS out of the channel. The higher-high and higher-lows figure demonstrates the strength of buyers, this can also be seen on today’s first 4H bar, whereas the candle which resembles a “dragonfly doji” signals the uptrend continuation.