The day-to-day volume of Bitcoin trading reached $14 billion, while its share in the general industry settled at 66.7%.

The digital money market was the most comprehensive in the positive segment zone on Monday as sentiment gave signs of progress contrasting with the previous seven days. Bitcoin price was drifting in the $7,400 region during early Asian trading.

Although the vast majority of previous selling pressure has fallen, we haven’t seen a generous recovery in Bitcoin at the moment. In any case, consolidation may likewise provide a recovery opportunity for long-term HODLers.

After a previous mixed week, it is a perceptive start for the week.

The Bitcoin trend towards $7,600 levels will indicate an early move. BTC/USD reached a high of $7,636 on December 7 and was in a specified range with a bearish slope from that point onwards. In the hour of composition, the advanced currency is changing at $7,475, unchanged both on the daily chart and since the beginning of Monday. The day-to-day volume of Bitcoin reached $14 billion, while the share of the general industry settled at 66.7%.

Elsewhere, Europe kept driving on the full lines of cryptocurrency.

This came after the report that France will test its digital money for the National Bank. The ongoing investigation by Deutsche Bank recommends that advanced money can replace fiat in the long term one day, as interest in privacy and the increasingly decentralized means of deposits evolve.

Without any doubt, 2019 was a difficult financial and political challenge for important countries, which affected speculators around the world. One year from now, it will be difficult for the financial professionals to settle for “bull and bear contentions” because there is no speculation accompanying a crystal ball.

However, the value of the U.S dollar that is widely used is likely to decrease in 2020, which could give support to a decentralized version of the currency, for example, bitcoin or various stable currencies, no doubt the one that will be created by national banks of the individual nations. 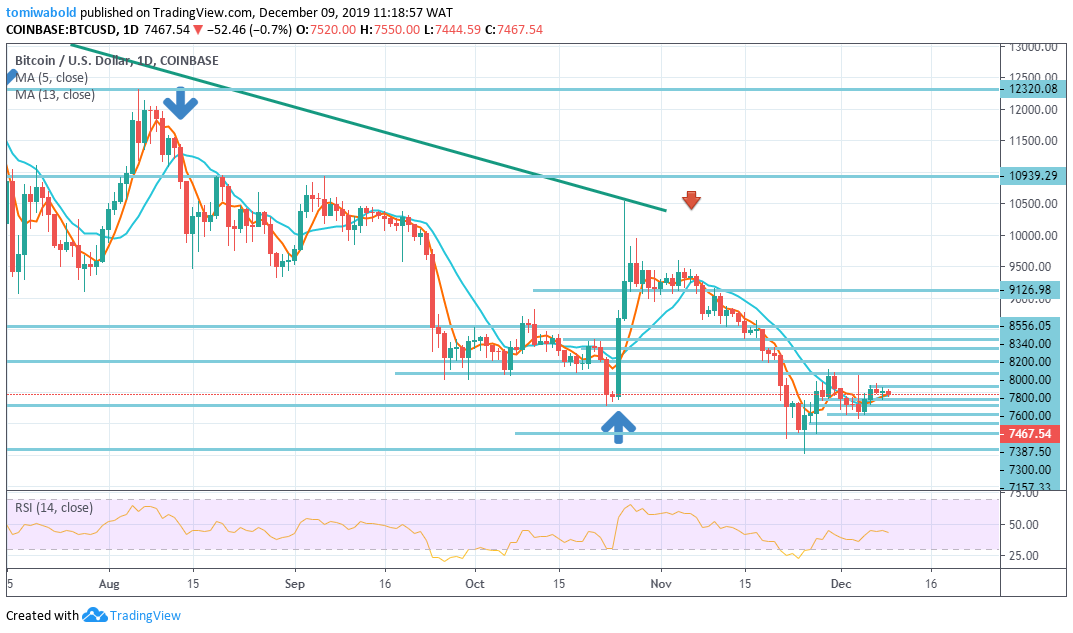 BTC/USD Is Stuck within a Tight Exchange Range

After the market fell to as much as $75 after the opening, the market discovered how to switch while allowing bulls to control and may end the day past the opening price.

The strong support, for the most part, is accumulated below the current price. This indicates that the currency gets a chance to continue its recovery if the nearest support area is filled as the digital currency rebound.

BTC/USD maintained its consolidation within a narrow exchange range between the level of $7,387.86 and $7,600, as it is now trapped over the last three trading days.

Its price is trading near the major technical resistance at the level of $7,600. Bitcoin again faced sellers around the $7,550 level for the third consecutive day of the exchange after sellers discovered the level at $7,600 in the previous session.