A recent reversal in the return premium of ETH vs. ETC due to buying by Bitcoin holders means that ETC now looks exceptionally cheap.

As Bitcoin and Ethereum make big news with huge price jumps over the past month, a key question comes to light: which version of Ethereum are investors more likely to make money off now: ETC or ETH?

While there are a whole variant of options that investors can choose from when it comes to Bitcoin’s blockchain in the form of a host of other altcoins, there is currently only one version of Bitcoin, and that is the unit known by its symbol BTC.

For Ethereum, however, there are two versions: there’s the original Ethercoin, denominated by the symbol ETC, and then there is Ethereum, which is the officially-supported unit, available in ETH denominations.

Despite both running off the same Ethereum blockchain, the two virtual currencies ETC and ETH have very different market sizes and would appear to have quite divergent trading paths.

ETH, the “official” Ethereum, is currently valued at around $20 billion in total, with about a billion dollars of that a day being liquid. ETC, or Ethereum Classic as it is known, has a total market size of $1.6 billon, with liquid trading representing roughly $150 million of that. In other words, while ETH is much larger in terms of market size, ETC is about twice as liquid relative to its market valuation.

To make matters more perplexing, while ETC investors have made about a third as much money over the past 3-month to 12-month period overall, ETH investors are about 10% ahead of ETC holders over the previous month, in which both currencies have risen by more than twice in value.

Understanding The Role of The Vitalik Premium

The relatively less-liquid ETH and the long-term comparable difference in price gains is an interesting observation: standing at around 20% historically, it seems to be due to the fact that ETH is the officially-supported version of Ethereum. We can call this the “Vitalik Premium” since it is the premium investors pay for the support of Vitalik Buterin behind ETH:

This premium exists as a safety-net as opposed to a being a return-generator; in other words, the premium exists as a protective measure for Ethereum investors who opt for ETH. It is a premium we calculate by working out the return superiority of ETC and dividing it by the liquidity superiority in present day terms and multiplying the result by 100. The premium in the price of ETH leads to comparatively higher gains for investors in ETC most of the time but also more risk: 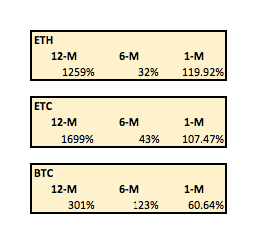 The relationship between ETH and ETC is fundamentally easier to understand once we bring in Bitcoin as a constant variable between the two. Bitcoin gains correlate with ETC gains by about 1 to 3 over the previous 12-month period, and with ETH gains by about the same over the past 3-month period. Suddenly, over the past month, BTC gain correlations have leaped up, and now converge with ETH by about 1 to 2. This might lead us superficially to believe there was a closer correlation between BTC and ETH than there is between BTC and ETC.

This supposition is further supported by looking at the overall variance between BTC and ETH/ETC. Here there is substantial evidence that on a net basis, ETH is in fact highly correlated with BTC, even more so than it is with its sister ETC: by doing a standard deviation average calculation, we can see that BTC correlates with ETH about 97% of the time, while it only correlates with ETC about 19% of the time. That’s a massive difference.

Drilling down into the price movement disparities then, the big difference between BTC and ETH on one side of the table and ETC on the other side seems to be that while BTC/ETH are more reliable short-term trading currencies, that despite ETC’s comparatively larger pool of liquidity percentage wise versus its value, its overall diminished market size means that it is much more reactive in periods where return stabilisation is the norm. In other words, when volatility is low, ETC is at its most active; when volatility is high, ETC takes a back seat to BTC and ETH.

This observation is shown up in the comparison between the 6-month-ago and the 3-month-ago changes in all the currencies; while BTC and ETH produced 54% and 115% gains respectively during the second to third quarter period over the last year, ETC slipped back about 10%; in the following financial quarter, while BTC etched up about 50% and ETH made about 250% in gains, ETC leaped nearly four times in value. Note that in these instances the Vitalik Premium arguably represented great value for investors who are more cautious about short-term losses, since it seems to have ring-fenced the overall trading results of ETH.

A similar pattern to that described above can also be found in the first financial quarter of the past year, in which BTC/ETH produced 15% and 7% gains respectively, while ETC jumped about 40% in value. At this point, the Vertalik Premium was probably at its most dear, given that the ETH investors lagged ETC investors by more than 5 times in gains.

A Recent Short-Term Reversal of The Vitalik Premium

In the previous one-month period, as bullish gains in Bitcoin have abounded, ETC has taken a back seat to ETH, however, for the first time in a year. Thus, the Vitalik Premium has come to represent – perversely – a sort of discount.

There are a number of possible reasons for this, but the chief reason seems to be that Bitcoin buyers are exiting Bitcoin with recent gains and switching over into Ethereum for more action. Remember – BTC and ETH are highly correlated, so ETH is a very natural switching-choice for holders of BTC.

In other words, the most recent ETH buyers (i.e. those in the past one month period) seem to be former Bitcoin holders who now want to up-the-ante. Indeed, a number of Bitcoin investors have recently told me that this is exactly what they are doing. It would make sense that when switching over, the BTC buyers would jump into ETH vs. ETC, since it is the officially-supported currency of the Ethereum Blockchain.

For long-term Ethereum holders, the results to draw from this may be somewhat counter-intuitive. For a start, we can be pretty sure that the Vitalik Premium is coming back, and that the past month’s trading history is only a relative aberration in patterns (indeed, on a 3-month to one-year basis the Premium is still very much in tact). This means that ETC is due some hefty volatility – upwards – in the near-term, but will be more stable in a downwards trajectory.

Moreover, if the BTC investors are switching over into ETH, then this is even further support for the fact that it’s only a short-term return discount that ETH will hold over ETC, since the action of switching between BTC and ETH in and of itself further correlates the gains between the two currencies.

Overall, the out-of-step price activity recently in Ethereum’s dual currency pairs makes ETC a more attractive Q3 2017 holding than ETH overall and if you think Ethereum is overvalued here then ETH would now be a more risky holding than ETC. In today’s trading, with Etherum Classic up 11.6% vs. Ethereum’s 19.95%, the actual ETC volatility according to the Vitalik Premium historical average should put Ethereum Classic up around 49.88%! That’s a pretty substantial implied gain that is building up in the current Vitalik Premium discount.

The recent reversal of the Vitalik Premium would seem to imply that for now at least, whichever way Ethereum is headed, ETC has never been this cheap or this safe to buy, and might not again for a long while.