The cryptocurrency market started the week on a good note with Bitcoin (BTC), the world’s largest cryptocurrency by market capitalization breaking past the $50,000 psychological level, a great rebellion from the bear forces that has kept it down for days.

The market has received renewed energy, and the appropriate palliatives to chart a new course evident in the current price movements today. At the time of writing and according to the price feeds obtained from CEX.IO, Bitcoin is trading at $53930.9 after seeing a gain of 6.73% in the past 24 hours. Ethereum (ETH) is duly tagging along in this new bull run, accruing a gain of 5.53% to be exchanging hands at $1,830.07 per coin.

A deeper dive to see both the fundamental and technical forces backing this new ambitious price runs.

Bitcoin: Taking a Bullish Plunge Amid Stimulus Bill Passage and Institutional Stock Up

The digital currency is looking to be the biggest beneficiary of the United States Senate’s passage of the Biden administration’s $1.9 trillion COVID-19 stimulus bill. The economy is set to be awash with newly minted dollar bills, a situation that is poised to reduce the purchasing power of the fiat currency, based on the plausible inflation that will succeed it.

The previous passage of the COVID-19 stimulus bills back in March proved favorable for Bitcoin as the ensuing inflation moved corporate investors to seek refuge in the digital currency. Should history repeat itself, Bitcoin will be on track to retest new price levels above its previous all-time high (ATH) of $58,000 in the coming weeks or months. 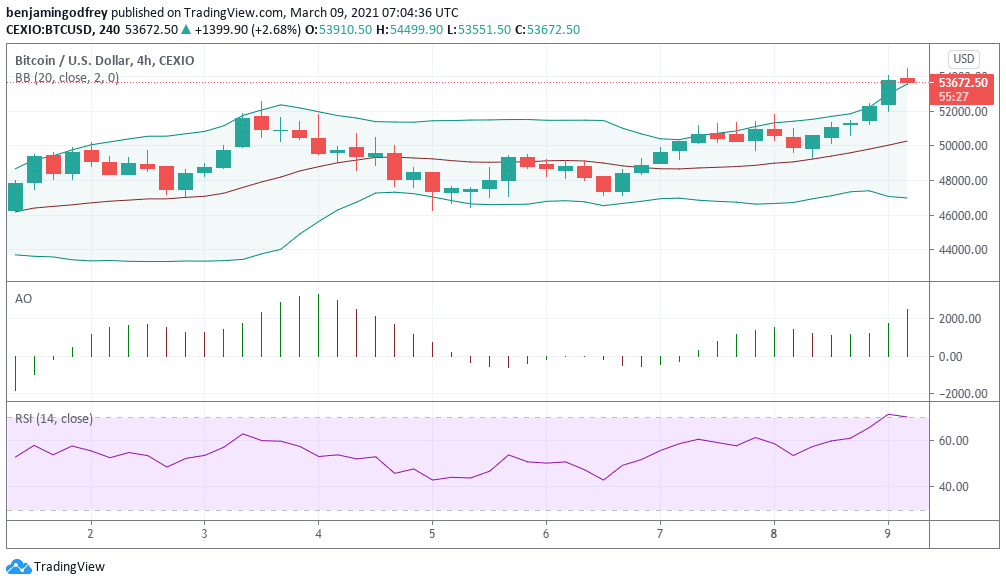 The BTC/USD 4-hour chart on TradingView shows a revved-up move by the technical indicators. The RSI is way above the neutral line and shows a buying momentum at 70.05. The Awesome Oscillator is significantly above the positive region, confirming the bullish price run of the premier digital currency. Additionally, the bulls have pushed the price above the signal line and toward the upper Bollinger Band.

If these indicator signals are sustained, Bitcoin is set to beat the $54,000, and $56,000 resistance level in its bid to surge past the ATH to the delight of its investors.

The purchase of Bitcoin by Chinese Tech firm Meitu Inc, and Norway’s second-richest man Kjell Inge Røkkes Aker at approximately $40 million and $58 million respectively are some of the latest boosts the Bitcoin market is thriving on to beat the market bears today.

Ethereum’s Breaks $1,800 Resistance For The First Time This Month

Ethereum has impressively broken the $1,800 resistance for the first time this month, trading at $1,830 at the time of writing. The growth of Ethereum has particularly posed a challenge in the past days owing to skyrocketing network fees, a situation that is pushing users to alternative blockchain networks.

Ethereum’s beauty was revived by the plans to initiate the EIP 1559 upgrade to the network by July. Through this upgrade, the network sets a base fee paid by users in contrast to the previous method where each user can set his own payable fee.

Also with the EIP 1559 upgrade is the token burn that will accompany some of the Ethereum, after they are being used for transactions. This upgrade will help deflate the number of Ethereum in circulation, a move that is bound to increase the price valuation of the coin over time.

Consider the ETH-USD pair on the 4-hour chart on TradingView. 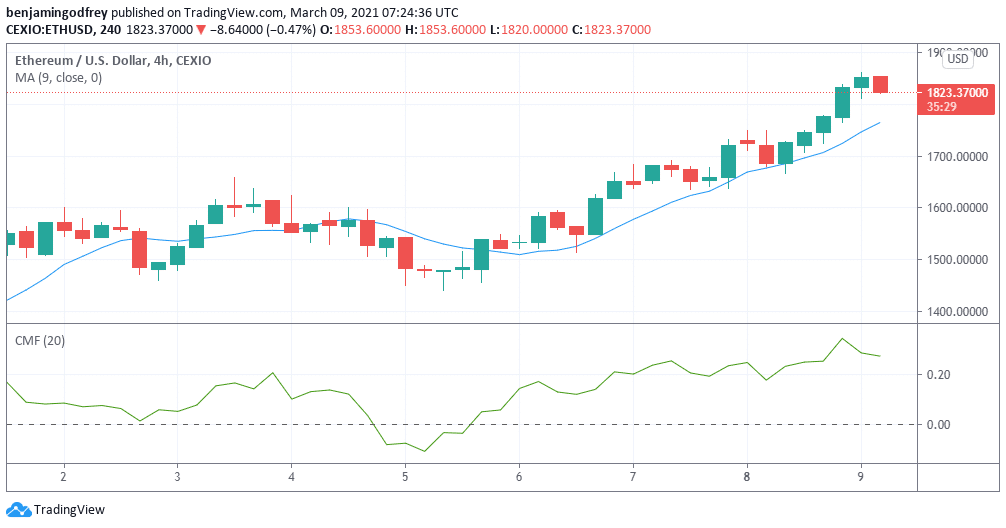 The chart shows Ethereum has been on the rise since March 5, breaking the $1,500, $1,600, $1,700, and $1,800 in that time frame. The Chaikin Money Flow (CMF) indicator confirms this trend, being positioned above the 0 benchmarks at 0.25. This is bullish for the coin, whose short-term moving average is also extremely bullish as seen on the chart.

While Ethereum journeys to rollout the Proof-of-Stake network that will permanently resolve its scalability and network fee issue, the network users will see the EIP 1559 upgrade as a short-term palliative.