Greg Waisman, the co-founder and COO of the fintech company Mercuryo, shares his insights about the Bitcoin (BTC) and Ethereum (ETH) daily price movements.

Bitcoin and Ethereum have seen quite a bit of volatility over the past few days, particularly over the weekend and on Monday. However, the situation seems to be under control again, as the prices are now stabilizing and the volatility is slowly letting go.

‘Bitcoin Is the Future,’ Says the Dutch Politician

One of the bigger events involving Bitcoin actually involves the activities of a Dutch politician, Robert Valentine. Valentine is a chairman of the Dutch Libertarian Party and an election candidate, who started his election campaign by praising BTC and claiming that the coin is the future.

The move has already attracted the attention from the local voters, but it also helps spread awareness and will likely result in attracting even more people to Bitcoin, which will ultimately be good for the coin, and likely for its price. The campaign has seen a number of billboards with the message ‘Bitcoin is the future’ (Bitcoin is de toekomst), also featuring Valentine, Bitcoin, and laser eyes.

Another positive development regarding the coin in Europe is the recent decision by the french lawmaker to sign a petition to allow central banks to buy and hold BTC. The petition claims that not owning BTC will put France in a financially weak position in the next five to ten years, and that the country’s lawmakers and banks need to immediately change their stance on the cryptocurrency. Interestingly, one of these lawmakers, Jean-Michel Mis, supported this by providing his signature.

Another interesting development comes in the form of a new report published by Glassnode. The report indicates that 37% of Bitcoin’s supply has not moved from the holders’ wallets since 2017. Meanwhile, a total of 55% of the total supply sat idle following the crypto market hitting bottom in 2018.

In other words, HODLing seems to be larger than ever, as everyone expects BTC to keep going up.

As for Ethereum, the project has not seen a lot of activity and mentions over the past few days personally, but it is beyond obvious that NFTs, another of Ethereum’s major products, are seeing massive amounts of popularity. Based on Ethereum’s ERC-721 token standard, ETH-based NFTs are still the most popular in the industry.

Bitcoin has hit a new all-time high a few days ago, after it skyrocketed from $56.3k on March 13th to $61.5k on the very next day. This was a 10% surge that did not only allow BTC to surge, but also to reach the $60k milestone and even to go beyond that, to a new all-time high. Of course, soon after hitting the new record, the coin’s price was rejected and it crashed back to where it started – $56k. It attempted to grow again, but it crashed once more without getting too far, this time to $53.8k.

After that, a short recovery took the coin to $56k levels, and it has been there for over 24 hours now (March 17th), with only slight fluctuations. 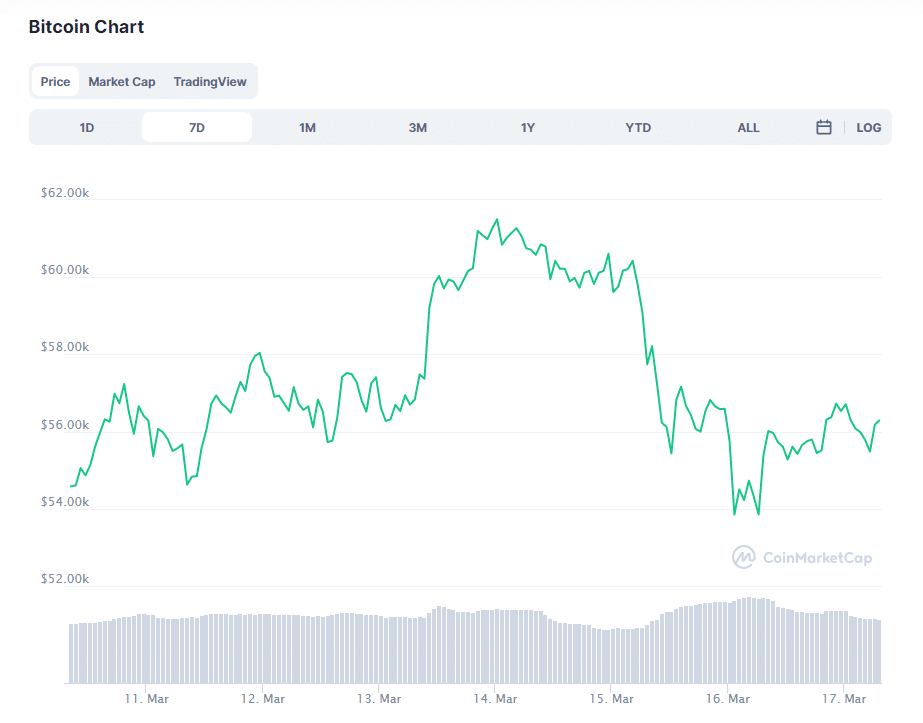 Ethereum seems to be stuck following Bitcoin’s price performance, as it once again displays an identical chart, only with much more frequent and sharper short-term fluctuations, which make the chart look rather spiky. But, while BTC was able to rise to a new all-time high, Ethereum did not. In fact, the highest that the coin managed to reach is $1936, which did not even bring it to the $2k mark, let alone the new ATH. 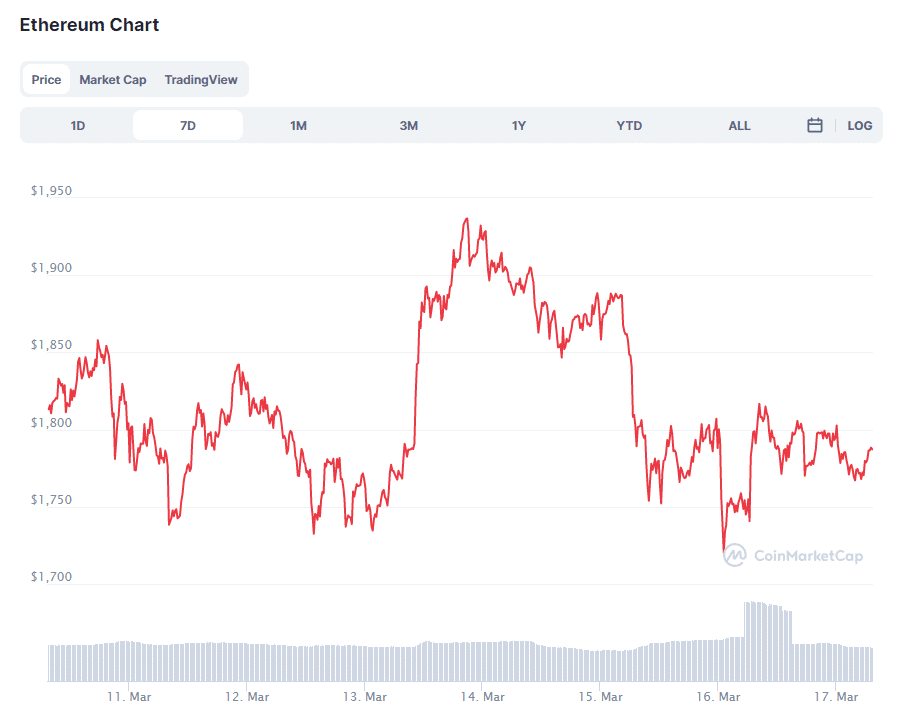 The coin was close to its record, but its price kept following BTC even in its rejection, and it crashed to $1720 before recovering to the current $1785.

The launch of the spot trading platform comes at a time when the market is experiencing a significant downturn.

In addition to Bitcoin futures trading, B3 will also launch Ethereum futures.