During the meeting in Vienna on Friday, Russia, Saudi Arabia and other OPEC participants were talking about the oil price and possible decrease of supply. Bitcoin price is down.

Per the plan, the world economy supposes to receive a boost thanks to the collective decrease in oil production. If all the major players would shorten oil extraction, the price would rise. However, not all the countries were happy with the OPEC plan.

Russia said they don’t have to make any more moves regarding the current oil prices and volume of extraction. After such claims, Saudi Arabia claimed they will start producing even more of the oil to gain dominance on the market. Instead of reaching the consensus, the OPEC meeting only added oil to the bonfire of the world economy. The leaders seem to avoid thoughts about the impact on the poor areas of their own countries.

The Bitcoin halving is approaching, while the world is slowly drowning in wars.

Per the Cointelegraph analysis, Bitcoin‘s price is gradually rising every time some major events happens. The network’s hash rate intensifies during Bitcoin price rise and drops down when the price falls. It also gains steam from different types of news about hard forks and important updates, as well as the halvings.

There are other things like the PlusToken hack out there. Some independent crypto researchers claim that, during the last few days, hackers moved a ton of BTC to mix services. Then, they presumably sell off the coins, and this fact hit the price. Bitcoin’s price is falling during such events despite the Stock to Flow model. It predicts that the price will gain steam before and during May 2020. Coronavirus is striking all the plans, with its powerful fear factor.

Coronavirus has destroyed half of the market activity, with some companies receiving zero but orders for their stocks. Saudi Arabia engages in conflict with Russians over the new price bottoms, making the profits even harder to achieve. Russian Ruble is already moving down. RUB is tanking from 63 rubles per one dollar to 77 rubles per dollar.

Some of the market observers think that the real target of Saudis is not Russia. Per the FGE Consulting analysts:

“Russia has been dropping hints that the real target is the US shale oil producers because it is fed up with cutting output and just leaving them with space. Such an attack may be doomed to failure unless prices remain low for a long time.”

After Saudi Arabia promised to pour the oil on the market, the expectations don’t show much optimism. In the U.S., the oil price has crashed to four years low of $27,35. Refinitiv data shows that oil contracts are heading to their worst days since 1991. The crude global average price is showing $33,49 per barrel.

On Monday, we see that Asian markets are melting, with the U.S. futures receive the biggest losses. British FTSE index has reacted with massive red color on Monday trading. Somewhat a scary picture for people familiar with calm British exchange days: 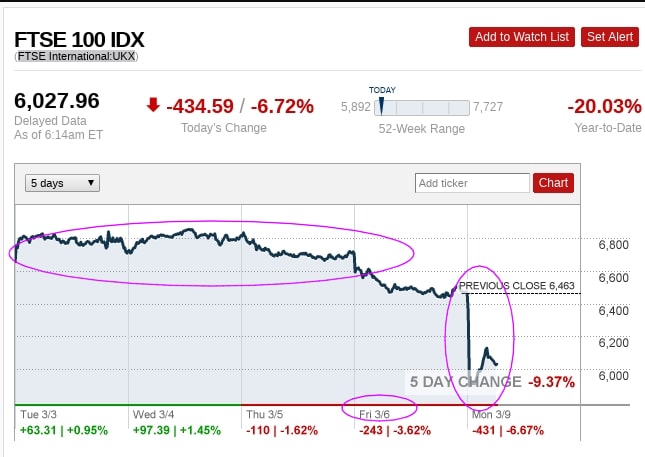 The Italian main exchange price index lost 7%. This is the country where coronavirus feels very good, many people are in the quarantine already. Italy is one of the largest tourist spots on the planet. Thanks to the virus, people will avoid visiting Eurozone this spring because there is still no data about the COVID’s incubation period and spreading capabilities.

Russian People Won’t Be Too Happy with OPEC Deals

Oil is one of the primary parts of the Russian budget. Half of the gas price in the country consists of the tax. This means, when Russians pay at the gas station, they give 25 rubles to the government and 25 to the oil company. Per the Constitution, however, all Russians have a share in the oil production industry. In reality, even British Petroleum has more shares in the Russian oil industry. The wealthy locals usually possess dollars, cars or apartments, not the oil shares or Facebook Inc (NASDAQ: FB) stocks.

Russia is at the brink of constitutional reformation that could have an unclear impact on the economy. Now, Saudis are making it even worse for ordinary Russians, as the oil price goes down in an attempt to strike down the Russian economy. People who live in Russia don’t care about the oil price, because they either don’t have oil stocks or don’t have money at large. However, the prices for products in the local grocery stores are tied to oil, so the hit will only heat the inner already unstable market conditions.

Before his latest move to push for crypto payments at Capitol Hill, Cruz has always supported crypto assets.