Bitcoin is attempting lower levels trending to support on the level at $7,000. The present pattern is bullish, while the unpredictability is high.

The Bitcoin CME gap has turned out a tradable situation as of late, in any case, in past weeks, the gap has remained underneath the weekly gap however this isn’t the situation now.

While the scenario isn’t ensured aftermath, it has turned out an entirely dependable and extraordinary measurement for the cryptocurrency as of late, and this expansion, alongside other buying factors, would be supported by bulls.

Bitcoin is presently sitting at $7,278.04 after falling to an intraday low of $7,190, Coinbase data displays. Still, $7,800 is likely, even after this failed attempt at a fast recovery, some technical analysts believe the king of cryptocurrency could make a surprise move to $7,800. The logic backing this bullish forecast is a CME futures gap that can be filled in 24 hours.

The Chicago-based CME Group is a force to be reckoned with in the digital money space after debuting its cash-settled Bitcoin futures in December 2017. However, it opens and closes with other Wall Street markets, while Bitcoin trading is active 24/7.

Therefore, if Bitcoin encounters any of either trend when the CME market is closed on its candlestick chart. These gaps are largely tracked by technical analysts because the main cryptocurrency has a historical tendency to re-explore these price levels.

In December of the year 2019, will the top cryptographic money end in a bullish movement or tumble to a yearly low? Since early November, the daily structure displays a downward pattern. A few endeavors to break $9,500 price level were made, however, the momentum fizzled and what followed was long stretches of losses, with Bitcoin tumbling to about $6,500 on November 25. 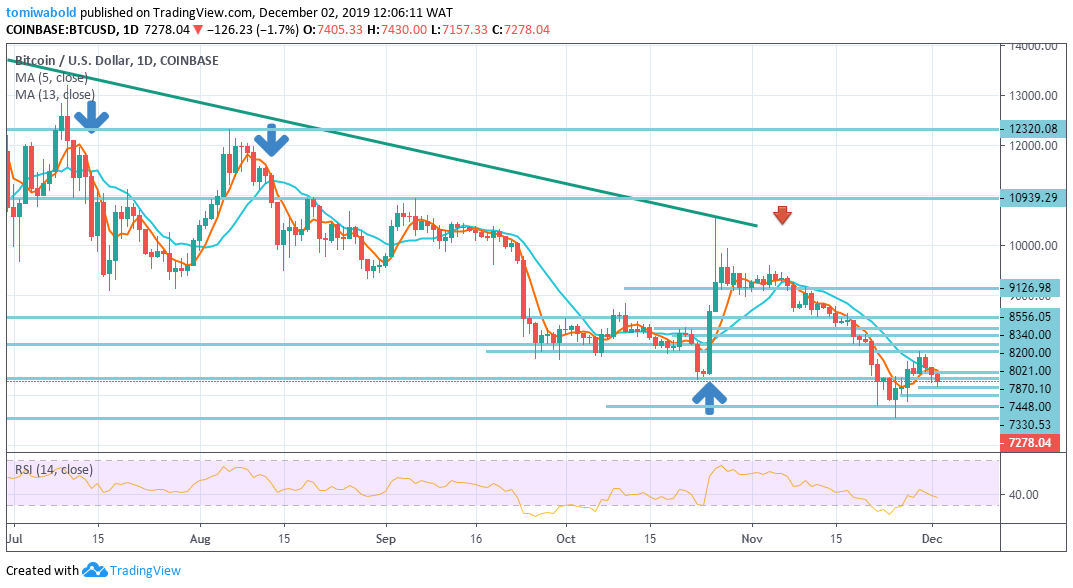 Stall at Bearish Continuation Scenario on BTCUSD while Targeting $ 7000 Handle

Bitcoin is attempting lower levels trending to support on the level at $7,000. The moment of fall is happening following a dreary end of the week that has had practically no positive activity. Bitcoin, be that as it may, has consistently constrained key support levels, including the levels at $7,157.33 and $7,000.00 respectively.

In the meantime, BTC is trading at $7,278.04 after a 2.2% drop during Monday’s European session. The present pattern is bullish, while the unpredictability is high.

After trending down to $7,157.33 during the prior day, Bitcoin rebounded off the near term horizontal zone on the same level. The inability to close underneath the support may build that level’s significance as support going ahead.