The fiscal and economic policies being rolled out by the Feds in various nations, particularly the United States can also help in the Bitcoin price retracement moves.

The price of Bitcoin (BTC) is seeing a gradual retracement as market bulls’ effort leading to the breach of the $40,000 resistant zone was met with rejection. At the time of writing, Bitcoin is changing hands at $39,915.36, down 0.21% in the past 24 hours according to CoinMarketCap.

The snapshot performance of Bitcoin is in contrast to its 24 hours price record, which saw the cryptocurrency print its biggest price gain of $40,816.07 in more than a month. The current Bitcoin price retracement has been seen by analysts as a viable move to help the digital currency secure a new rebound.

“What you want to see after such a move is the price is going to make a higher low, and preferably you want to see it happen in the range around $34,500,” he explained, noting that this was previously an area of interest. 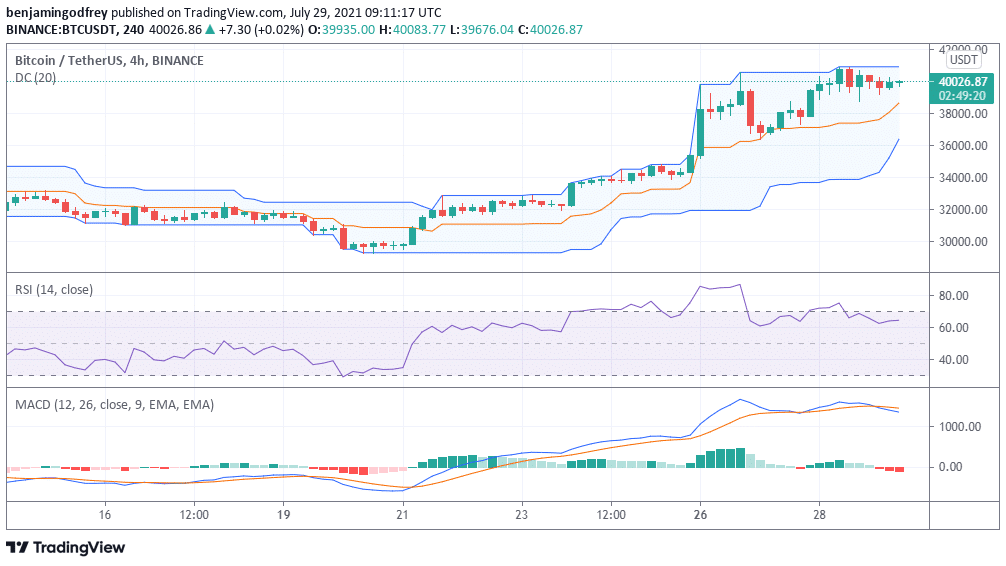 Considering the BTC-USDT 4h chart above, the price of Bitcoin is obviously being flipped from its upward run by the bears as showcased by a recline in the RSI and MACD indicators respectively. With the expectations in a new bullish run by the digital currency, a move smeared by the denial by Amazon.com Inc (NASDAQ: AMZN) in the claims that made the rounds that it is set to accept the cryptocurrency as a means of payment for its products and services by year-end.

Nonetheless, a confluence of analysts believes Bitcoin will trade in the $40,000 to $45,000 in the short to mid-term, as the ambition to retest the previous All-Time High (ATH) above $64,000 is not ruled out on or before year-end.

Bitcoin Price Retracement May be Lifted by Current Inflation Outlook

The fiscal and economic policies being rolled out by the Feds in various nations, particularly the United States can also help in the Bitcoin price retracement moves. The US Federal Reserve Chairman, Jerome Powell unveiled earlier that the economy’s inflation rate is direr than envisaged. This calls for the need to divest investments into a more secure and inflation-resistant asset. For many, Bitcoin fits this profile in various ways.

“We live in an unprecedented time of fiscal and monetary stimulus,” noted Anthony Pompliano, a vocal crypto advocate and the partner at Pomp Investments, in one of his recent notes to clients. According to him, investors would do so much better while putting money in financial instruments than holding cash or negative-yielding assets.

“If our government and economic organizations continue to outlaw bear markets and ban market corrections through their intervention actions, then the market will only be allowed to go higher and higher over time,” he said.

Going by the model in which Bitcoin completed the 2020 fiscal year, a repeat of last year’s run may take the price of the premier cryptocurrency toward the $70,000 to $80,000 range if both retail and institutional investors revive their buying spirit in the coin.

European stocks continue to crumble as the markets keep struggling to float above the waters and absorb possible recession fears.

The United States Federal Reserve, the apex banking institution in the country has been battling inflation growth since the emergence of the coronavirus pandemic, and per a recent remark by Chairman Jerome Powell, the fight against inflation is not waning anytime soon.