Regardless of the prediction for another Santa Claus rally, Bitcoin holders still might be content with a minor increase in 2019.

The Bitcoin and crypto money markets have thrust in a downward pattern for quite some time, but with only half a month until Christmas, Bitcoin bulls are anticipated, could we be expecting another Santa Claus rally?

The Bitcoin price forecast is approximately a part of the highs of its year so far, with most (but not all) altcoins struggling to stay closely related to Bitcoin and recording worse results.

Some experts are extremely optimistic about the future of BTC. For example, Charles Hoskinson, Ethereum co-founder and creator of Bitcoin rival Cardano believes:

“Crypto is unstoppable. Crypto is the future,” added he.

On the off chance that it is seen Bitcoin recovers later in the year, it would not be the first time that digital currency markets would increase in December. At the end of 2013, Bitcoin peaked at more than $1,000 for each Bitcoin.

A couple of years after the fact, in December 2017, the Bitcoin epic bullish pinnacle reached $20,000. Be that as it may, many things have changed from that point forward.

In any case, a small-scale rally of Bitcoins during the U.S. Thanksgiving weekend was recorded. At the end of the week, in which the price of Bitcoins increased by more than 10% in less than 48 hours, but at the moment it has almost receded.

The price of bitcoin is right now trading around $ 7,300 for each Bitcoin, contrasted with $ 3,500 toward the start of the year.

Regardless of Bitcoin bulls, the prediction that arriving at record highs is for all intents and purposes around the bend, Bitcoin holders might be content with a minor increase in 2019. 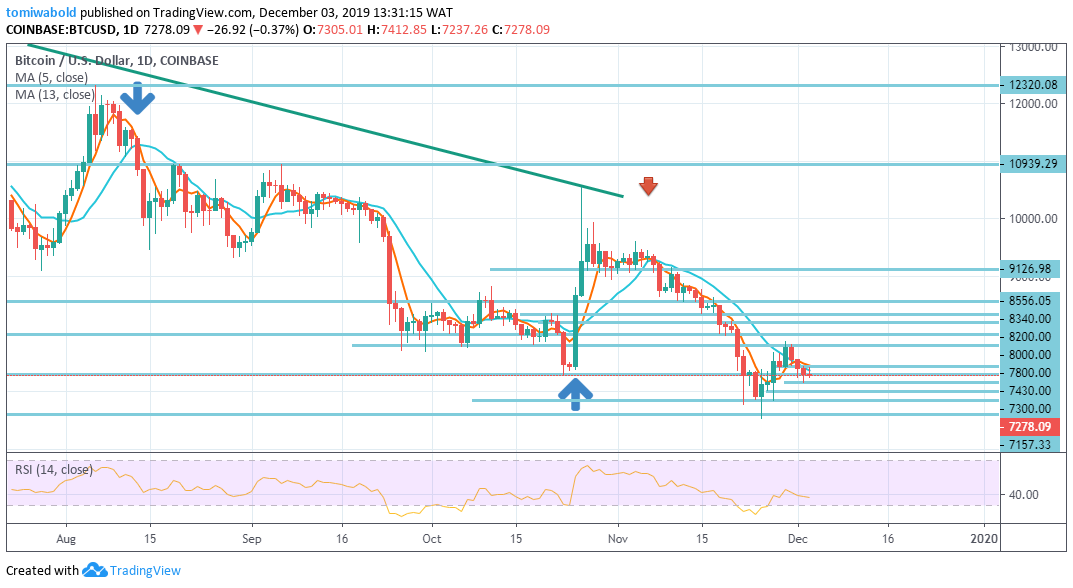 Bitcoin Is in a Range-Bound Accompanied by Bearish Bias

BTC/USD has been around $7,300 since the start of the week. The digital currency arrived at an intraday high of $7,430. However, the positive force couldn’t be kept up and Bitcoin fell beneath $7,300.

If the BTC/USD pair trends beneath the $7,300 level, sellers may target the support levels of $6,850 and $6,600. The price broke underneath the level of the key specialized support zone at $7,300, which will probably turn out as a barrier in the near term.

While the cryptocurrency is experiencing a short-term uptrend, this may only be a correction, since the long-term outlook stays bearish.