Bytecoin is the next generation cryptocurrency and the first virtual currency created with CryptoNote technology.

“I have always been impressed with the idea of Bitcoin and I have persistently been tracking its progress since 2011. Still, being a supporter of one great idea doesn’t get in a way of being a sucker for exploring uncharted territories and I still continue investigating the market and keep track of new perspective digital currencies. That is probably why I’ve got involved with NXT and Ripple and some other cryptocoins called Next Generation.

But however novel and different the concepts of those coins are from Bitcoin still them being non-mineable simply doesn’t jibe with my understanding of how coin should work.

It was around the middle of 2013 that I first stumbled upon CryptoNote technology. Right about that time Gregory Maxwell described his concept of user privacy protection tech called “CoinJoin” and I got interested if anyone else was working on the same issue.

Back then the notion of anonymous transactions was not as hyped as it is now and Google search would give me all sorts of anonymity related results but not what I was looking for. It took me awhile before I was able to find the bits of information about CryptoNote and its first implementation, Bytecoin.

Prior to the release of Bitcoin there were a number of ecash technologies starting with the issuer based ecash protocols of David Chaum and Stefan Brands, and moving on to Adam Back’s hashcash, Wei Dai’s b-money and Nick Szabo’s bit-gold.

However beautiful these precursor technologies were, they had one thing in common. They lacked the user privacy protection, namely the anonymity feature. And it seems that what everyone was missing had already been up and running in Bytecoin.

The heart of the CryptoNote protocol, which is what Bytecoin relies so heavily on, is its ring signature technology. This scheme makes it possible to sign a message on behalf of a group and while the fact of a transaction taking place is clear, nobody is able to pinpoint the transfer to a specific individual.

The CryptoNote protocol also makes it possible for transactions to be untraceable. Payments are split up between multiple one-time addresses that can only be received by the person who has the correct public key. So to estimate the amount of a transaction is virtually impossible.

As opposed to other noteworthy currencies such as NXT and Ripple, Bytecoin has the advantage of a mineable currency. And Bytecoin mining principle is diferrent from the Bitcoin’s one we got used to. The award for each next block is a bit less compared to the previous one. This stepless decrease in award forms a smooth award curve and does not suffer from 50% sharp declines as Bitcoin does.

Another feature that deserves looking into is PoW algorithm CryptoNight. It is memory bound and designed to be suitable for ordinary PC CPUs. Currently no special purpose devices for mining are available.

Therefore, CryptoNight can only be CPU/GPU-mined for a few years to come. Although CPU-mining has one potential disadvantage, namely botnets, while looking at the BCN hashrate/difficulty charts I couldn’t find any significant spikes that would indicate presence of botnets.

All that is known about the origin of CryptoNote protocol is that it was developed in 2012 by the members of the community comprised of cryptologists, mathematicians, economists and programmers. As for Bytecoin, it was officially launched on July 4th 2012 and the embryo of its user base that was formed in scientific circles gradually transformed into a more diverse pool of users.

Having followed the development of BTC and BCN for a long time I couldn’t help but wonder if there were any similarities between two. Driven by curiosity I’ve conducted a cursory analysis aiming at uncovering any underlying resemblance. The charts below represent a comparative analysis of transaction history of Bitcoin and Bytecoin in which I have found somewhat interesting characteristics: 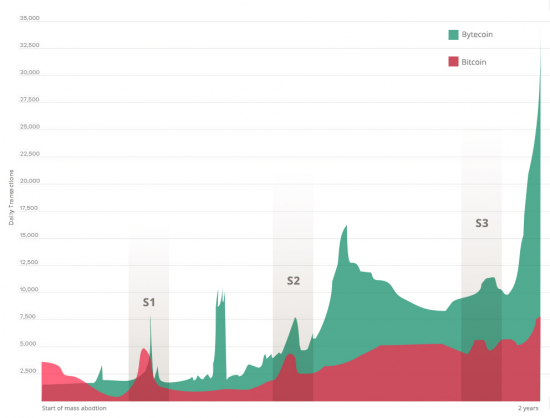 The initial bulk of BCN transactions is riddled with abnormalities. It is likely that the very first of them were created deliberately to increase the number of outputs needed in order to enable the anonymity feature in future transactions.

Also, growth in transactions volume on initial stages is equally slow on both charts. In case with Bitcoin it could be explained by novelty of the technology i.e. while thousands were aware of the new cryptocurrency only a few dared to become early adopters. The spikes that are clearly visible on both charts (S1, S2 and S3) appear right before the surge in transactions volume and apparently coincide with influx of new users.

Trying to draw a parallel between hashrates of BCN and BTC I’ve faced an insurmountable problem since hashrate fluctuation in Bitcoin can be explained by introduction of ASICs and hashrate of CPU-mineable Bytecoin can only be affected by a change in number of users. All in all, BTC and BCN are alike in many ways while differences between them are strictly conceptual.

Bytecoin has been making a significant progress over the last two years, and it has one important feature to offer that Bitcoin unfortunately can’t match. Simply put, Bytecoin offers robust user privacy protection.

Development of a user-friendly interface is something that most of the community members are looking forward to and that is what BCN developers’ team should focus on in the nearest future.

It is also expected that BCN ecosystem will include versatile merchant solutions and payment systems. One more reason why Bytecoin stands out from the other cryptocurrencies on the market is because it has been around for over two years, which is almost a lifetime for the most of the coins.

It’s been exciting to follow the progression of Bytecoin since it is one of the most mysterious coins to have ever appeared in the crypto realm. I realize that my brief article only slightly opened that veil of secrecy that mysteriously covers this currency.

I myself still have no clear image and I guess only a dozen people really has. And I continue following further development of Bytecoin since I know that it’s only the top of an iceberg.”

According to MetaBlock, Waves is the top blockchain project leading by commits. Ethereum and Cardano follow Waves and take the 2nd and 3rd positions with 1847 and 1687 commits respectively.

This edition of Max’s Corner is on developments in the field of quantum computing and the potential risks they pose to the cryptocurrency space.

Bytecoin has officially launched the Bytecoin Gateway Project, creating a bridge between the Bytecoin blockchain and that of Ethereum with a corresponding BCN20 currency to go with it.