At the time of press, ADA has recorded $9.5 billion tradings in the last 24 hours, Litecoin on the other hand is just under $9 billion.

Cardano (ADA) has flipped Litecoin (LTC) as the third-largest futures market. The asset now sits only behind Bitcoin (BTC) and Ethereum (ETH) with $580 million future open interest. Cardano has been impressing on all fronts. In the latest, the digital asset has climbed to become the third latest futures market. In retrospect, in December 2020 Cardano had $81-million aggregate futures open interest. Now, this has climbed as high as $580 million. During the 30% pullback earlier this week, ADA recorded $125-million long contracts liquidations, around 19% of the total open interest. This rapid growth can be attributed to positive price performance and network growth.

Since the turn of the year, ADA has surged by 475%. The gains have since seen the digital asset climb as high as 5th in the crypto market. At the time of press, ADA is exchanging for $1.02, with a market cap of nearly $33B.

While bears and bulls are locked in a price war, the digital asset has been winning on other fronts. After drawing attention to its flip of Litecoin in the futures market, a further comparison has shown that Cardano has swiftly put miles between it and Litecoin. For starters, on top of flipping it on the market rankings, now Cardano is recording higher daily trading volume. At the time of press, ADA has recorded $9.5B tradings in the last 24 hours, Litecoin on the other hand is just under $9B. The higher volume suggests a higher interest in Cardano and a positive outlook for the digital asset.

A further look into on-chain metrics, it is clear why Cardano is on top. As of Nov 2019, the two networks had a similar level of transfer and value of the transfer. Cardano however began taking the lead in 2020 and now the difference has grown 5 times. This has further validated the recent flipping.

ADA Set for a Big Year

Data from Cointelegraph Markets Pro shows that social media activity is also swinging in Cardano’s way. Cointelegraph reports that unique accounts discussing Cardano is 24% higher than the 30-day average over the past 24 hours. This has been one of the key metrics that has helped navigate the current market with new interest suggesting an influx of new investment. 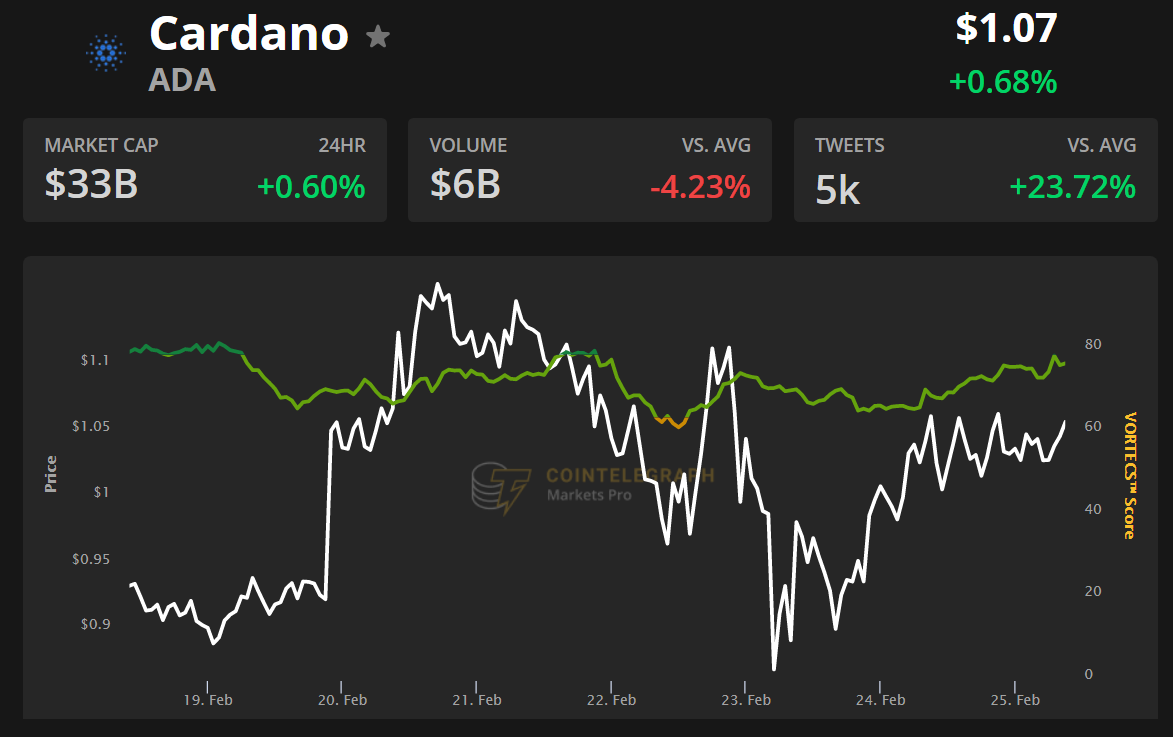 Throughout the year, the Cardano project has been undergoing a number of major developments. Earlier this month, Cardano upgraded to allow it to be multiasset like Ethereum. Since Cardano has been looking to become the go-to smart contracts platform. As it stands, Cardano is on track to achieving this, offering better scalability and lower fees. However, Ethereum 2.0 could turn the tables once again. In regards to price, ADA is a long way to overtaking Ethereum. At the time of press, there is over $150B separating the two assets in terms of market cap.

Kiguru is a fine writer with a preference for innovation, finance, and the convergence of the two. A firm adherent to the groundbreaking capability of cryptographic forms of money and the blockchain. When not in his office, he is tuned in to Nas, Eminem, and The Beatles.

The launch of Bitmain AntMiner E9 comes a year after the announcement. Also, the launch comes just before Ethereum’s move to the Proof-of-Stake blockchain raising doubts over its future sales.

The mini-rally recorded in the last 24 hours is believed to have been caused by the positive movement in Total Value Locked across Ethereum as well as improved on-chain activities.