A senior analyst at RoboForex shares his insights into the future scenarios for Bitcoin, Ethereum, Litecoin, XRP and Bitcoin Cash price movement.

The bulls have failed to break the important resistance levels out. Most probably, we should expect a good correction on the crypto market to begin. For example, on the XRP chart, the price will most likely continue falling, executing the reversal Head and Shoulders pattern. Unfortunately, the market has gone executing this pattern, and not all goals have been reached yet.

At the same time, on D1 of the Litecoin, there is a bullish 5-0 pattern forming, and if the price bounces off $50 successfully, there is a good chance of seeing another attempt of breaking $100. Hence, as noticed earlier, current correction will most probably give new levels for entering long positions. And a bounce off these levels, potentially, will provoke breakouts of local highs and general market growth.

On D1, the quotations have failed to secure above an important resistance level. Now, the prices have gone to test the support area and will potentially bounce to attack the resistance area at $10,425. The next support level, important for the bulls, is near $7,875. Here, the upper border of the descending channel will be tested, as well as the trendline on the RSI. All this can again provoke a bounce upwards and an attempt of further development of the uptrend. This scenario, positive for the buyers, may be canceled by a steep decline and a breakout of $6,875, which will indicate a breakout if the lower border of the ascending channel. In this case, we should expect further development of the downtrend. 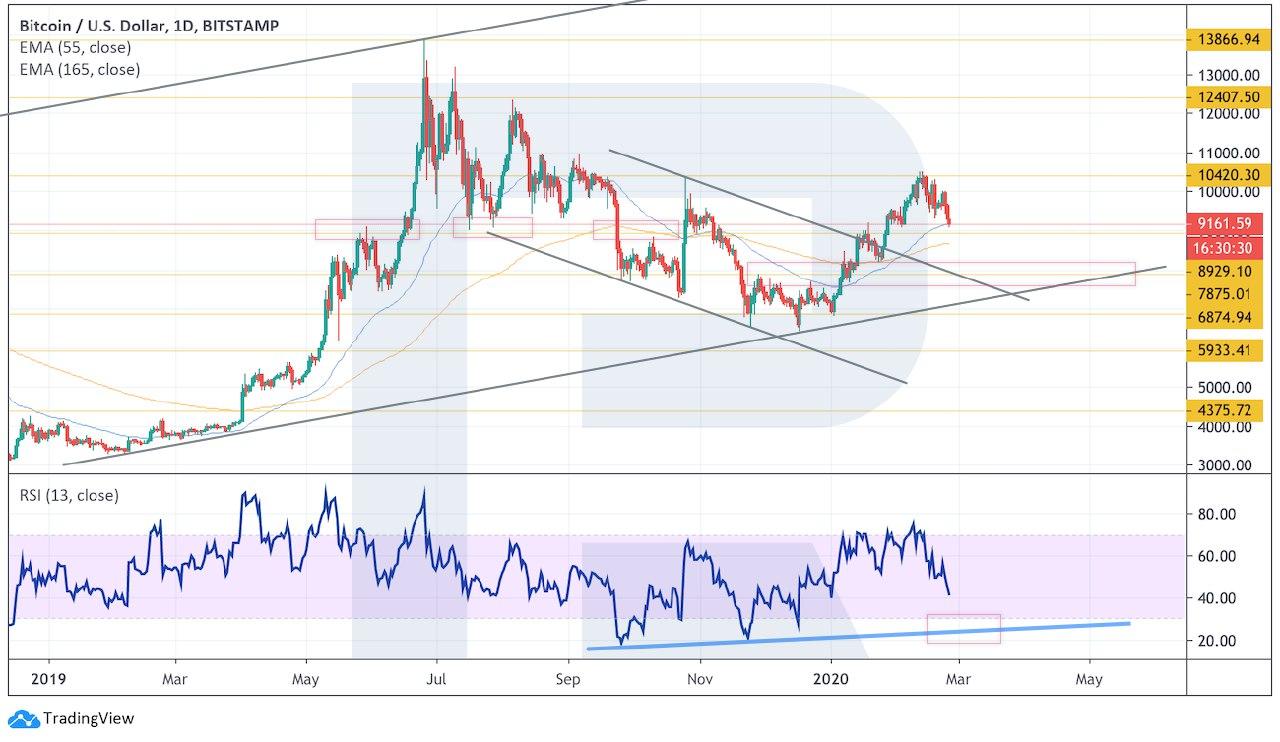 On H4, the prices have broken out the Moving Averages, which means strong pressure from the sellers. However, the prices keep declining inside the ascending channel. As we see, a strong support area is at $8,895. So, as a short-term trading idea, we should expect a test of the lower border of the ascending channel and further growth of the price. Another signal supporting this idea is a bounce off the support line on the RSI. The scenario may no longer be valid if the support area is broken out and the quotations secure under $8,895, in which case the aim of the decline will be the area of $7,875. The growth will be confirmed by a breakout of the upper border of the descending channel and securing above $9,995. 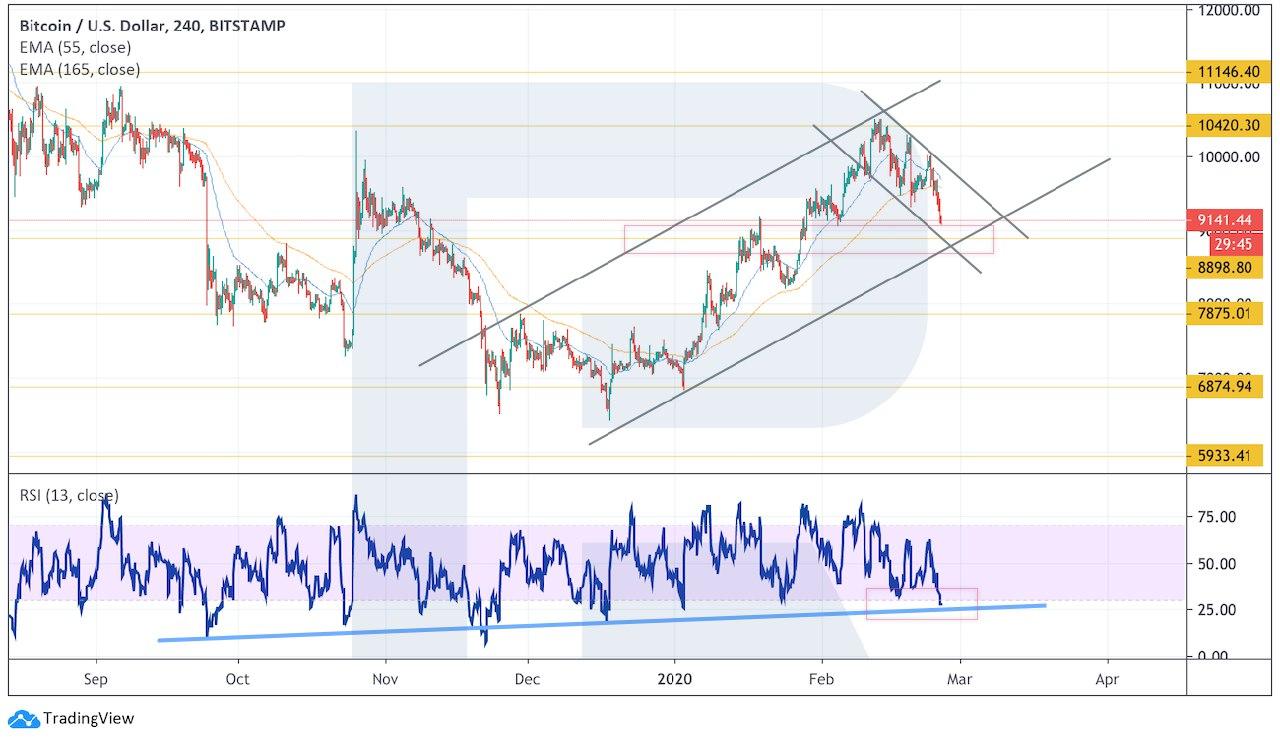 On D1, the Ethereum quotations have also bounced off the resistance area. What is more, the sellers have managed to return inside the descending channel. However, the prices are above the Ichimoku Cloud, which suggests an uptrend, that is why it is too early to speak about a reversal and a steep decline of the price. An important support area lies between $225-200, where the lower border of the ascending channel goes and a test of the support area on the RSI will happen. As we see, the prices have already pushed off this area on the indicator chart. The growth might be canceled by a serious decline, a breakout of the lower border of the Cloud and securing under $175. Conversely, the development of the uptrend may be confirmed by a breakout of the resistance level and securing above $290. 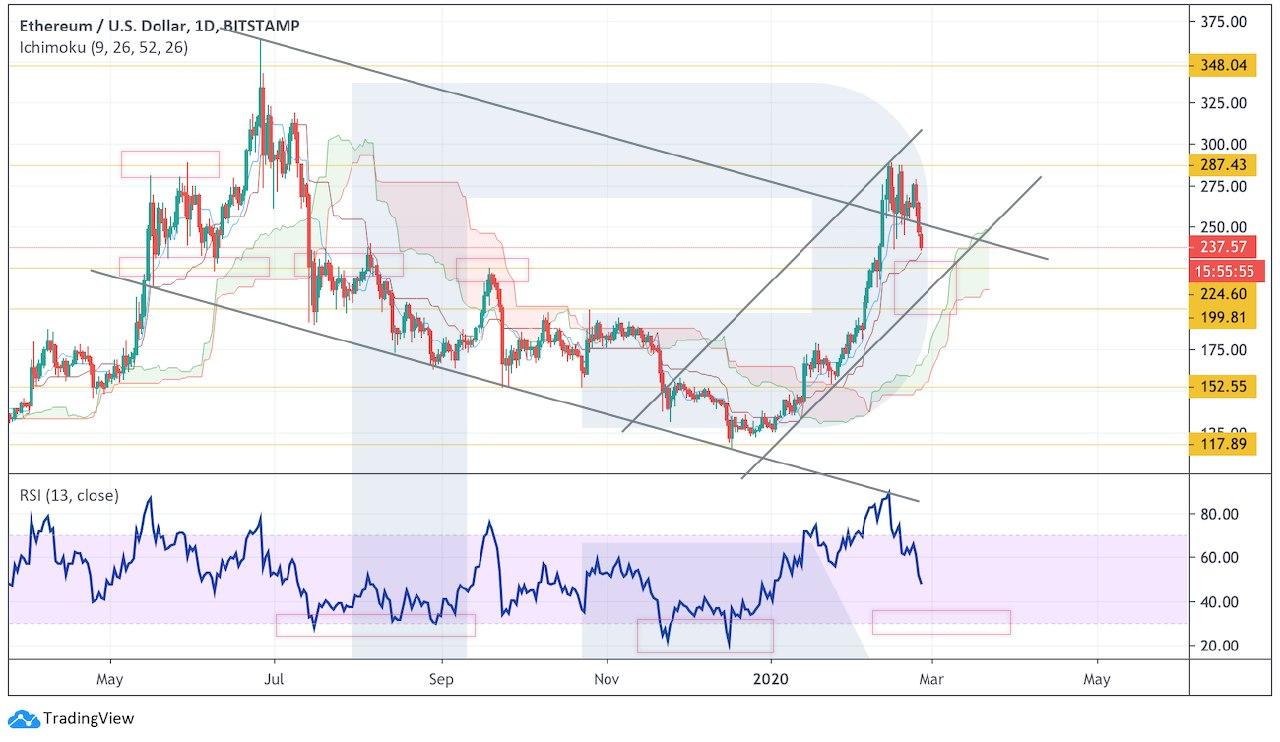 On smaller timeframes, the Ethereum has left the Triangle. We should expect an attempt of executing this pattern with the aim at $200. And from this area, we may again expect a bounce upwards and the beginning of growth. The decline is also supported by a breakout of the ascending trendline on the RSI. The decline may no longer be valid in the case of strong growth, a breakout of the upper border of the Ichimoku Cloud and securing above $275. In this case, we may say that the descending impulse has changed into a bullish trend. 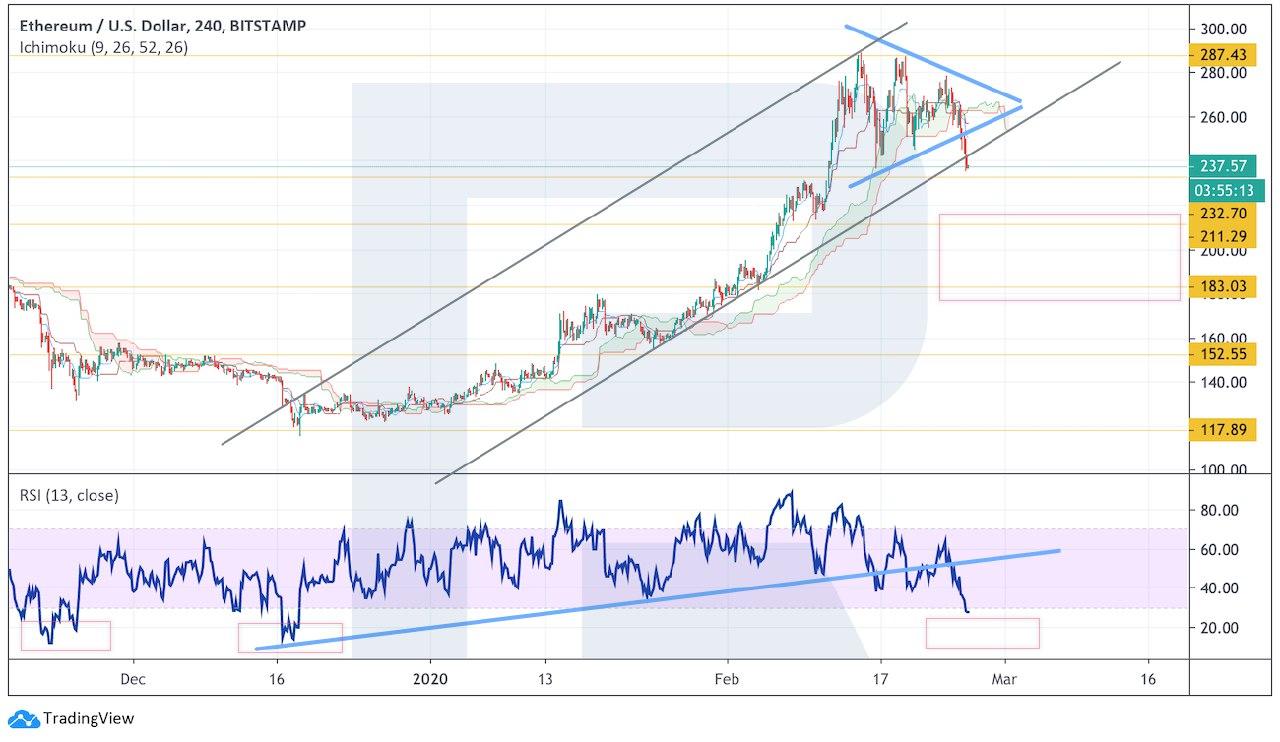 On D1, the Litecoin price has failed to rest at the resistance level. The bears are currently testing the support area, and we will probably see the level of $50 tested very soon. Here, an ascending 5-0 pattern is also forming, so a test of the lower border of the ascending channel is likely to become a good signal of a bounce and further growth with the aim of $102.95. Another signal confirming the growth will be a bounce off the support line on the RSI. The scenario may no longer be valid if $45 is broken out, in which case the aim of the decline will be $35. 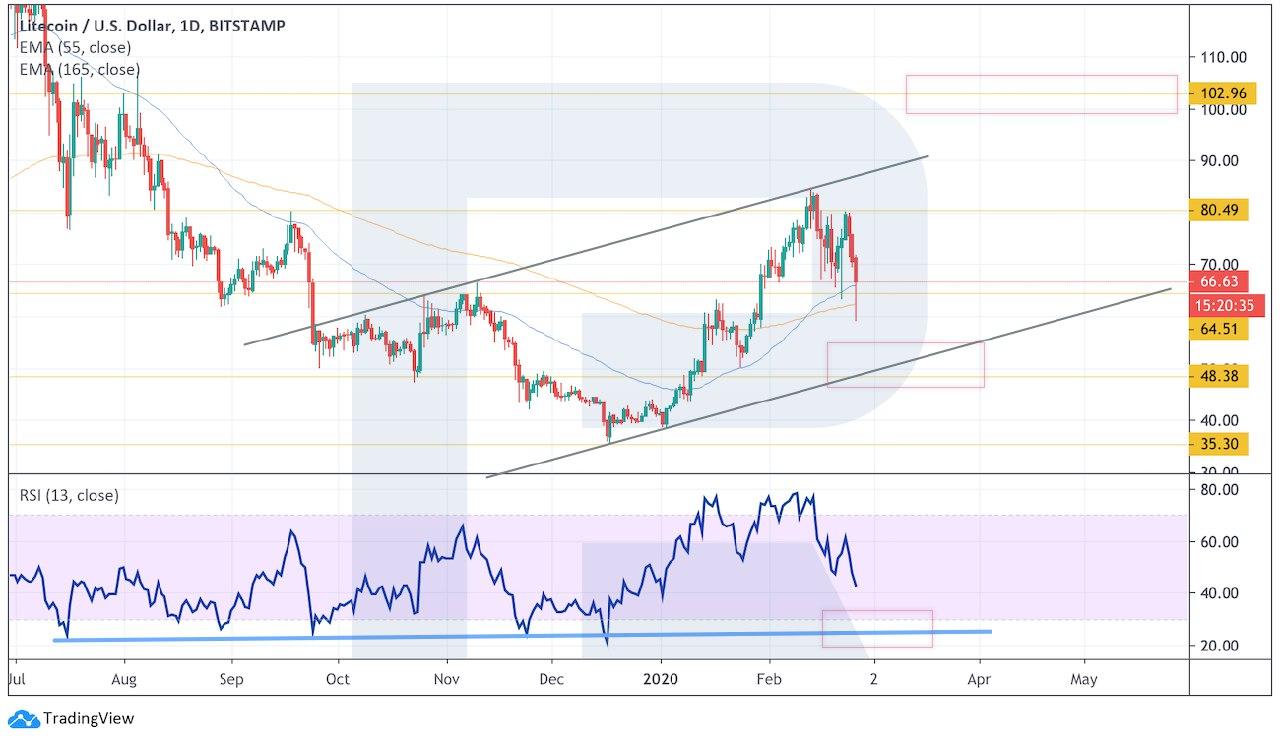 On H4, the quotations have escaped the ascending channel, which indicates pressure from the bears. Here, there are also risks of a decline with the aim of $48. An additional signal confirming the falling is a breakout of the ascending trendline on the RSI. The decline may be canceled by strong growth, a breakout of the resistance level and securing above $81. 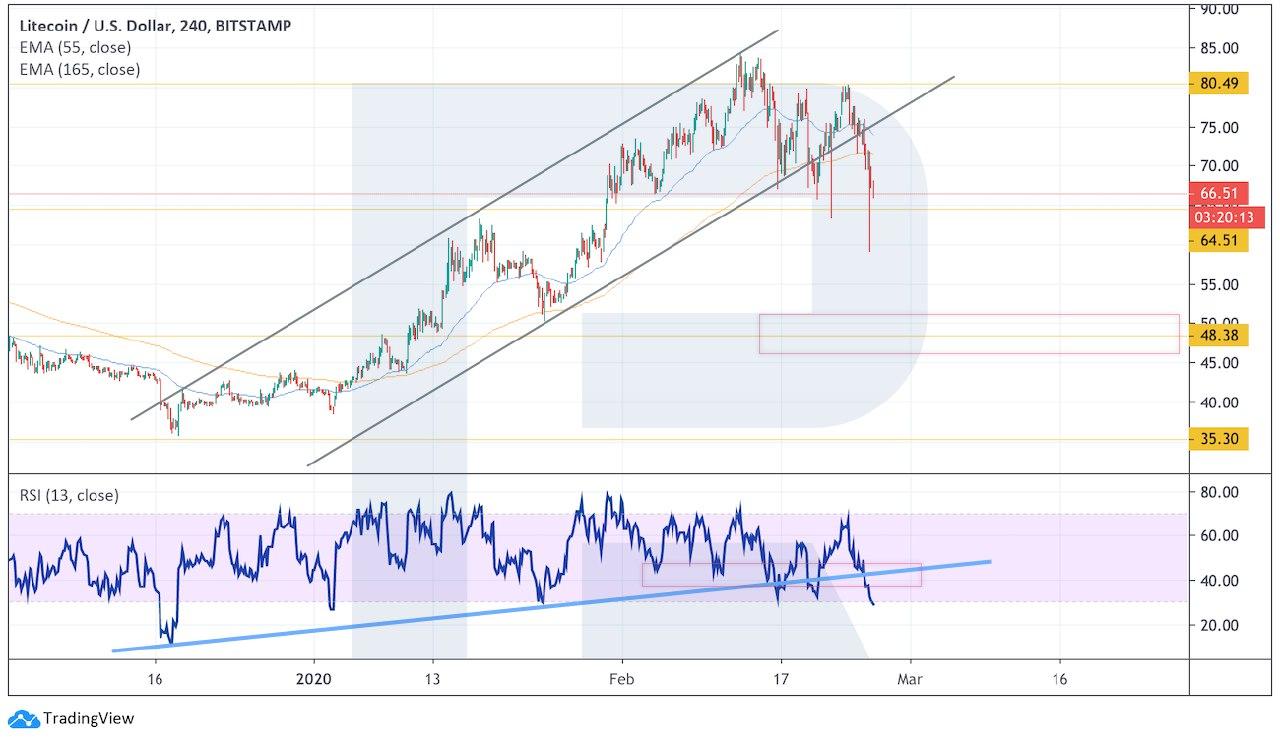 On D1, the XRP quotations, like most other assets, have bounced off the resistance area. Currently, they have a good chance to test the support area near $0.22. A bullish 5-0 pattern may still form, hence after a test of the border of the channel we should expect a bounce and an attempt of growth with the aim of $0.37. A good signal of such growth will be a test of the support line on the RSI. This scenario may no longer be valid in the case of further declining and a breakout of $0.17, which will indicate further falling. 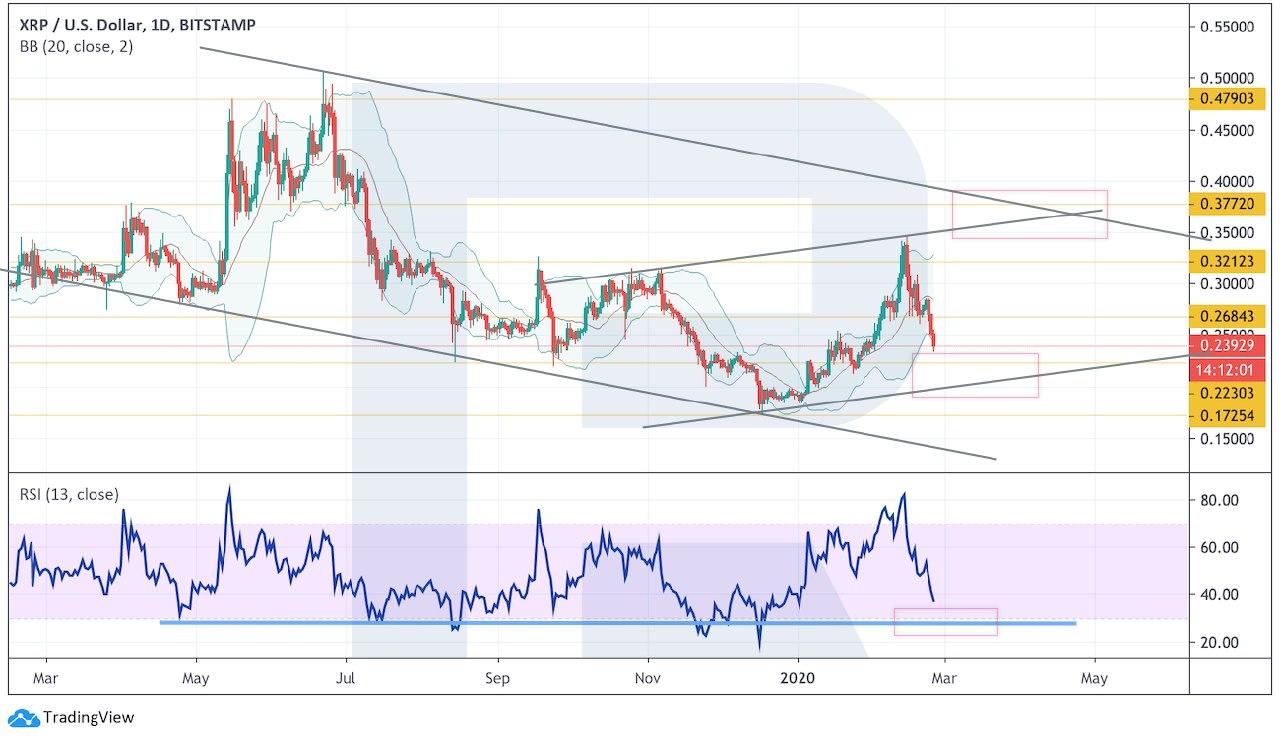 On H4, the crypto asset does execute the reversal Head and Shoulders pattern. The aim is around $0.20. Further declining is supported by a breakout of the ascending trendline on the RSI. The scenario may be canceled by serious growth and a breakout of $0.30, which will also cancel the reversal pattern and indicate further growth above $0.40. 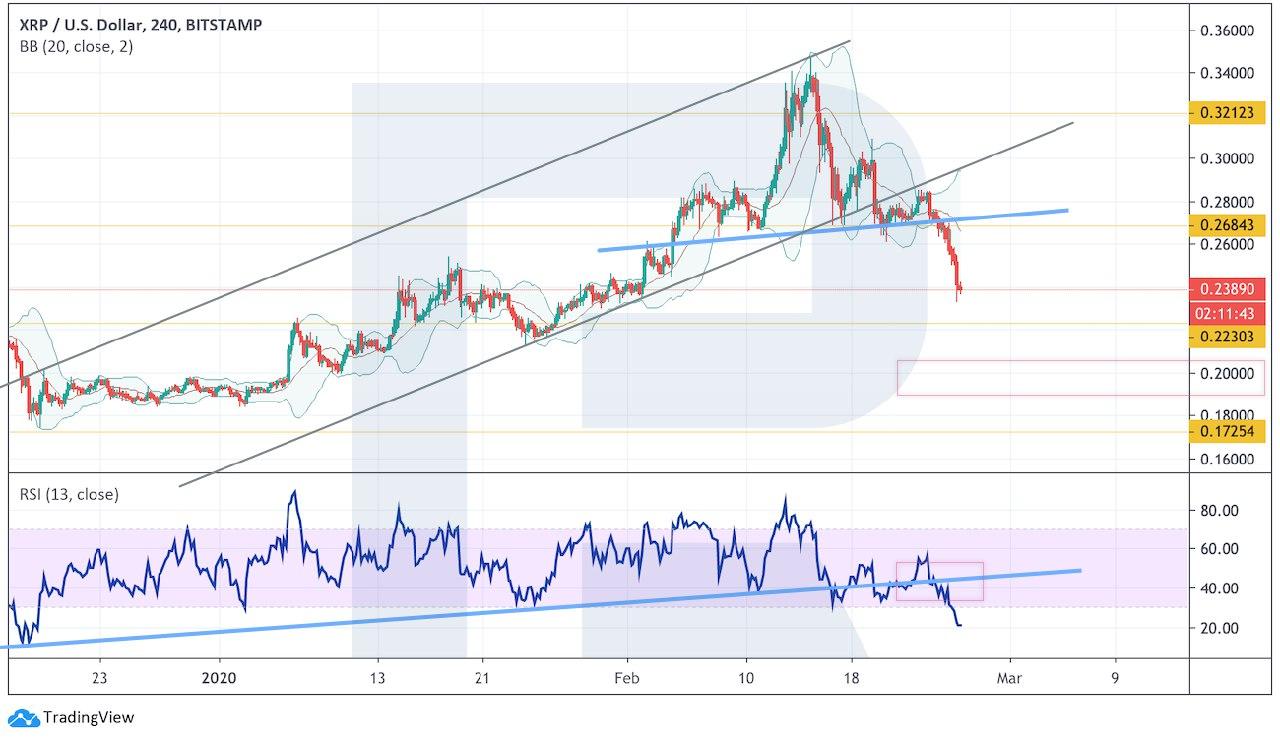 A failed attempt to escape the descending channel provoked the development of a strong correction on D1. However, the prices are now testing an important support area near $300. It is highly probable that there will follow a bounce and growth with the first aim near $500. This scenario is supported by both a bounce off the lower border of the ascending channel and a test of the support line on the RSI. The growth may be canceled by a breakout of the lower border of the Ichimoku Cloud and securing under $280. In this case, we should expect further falling to $160. 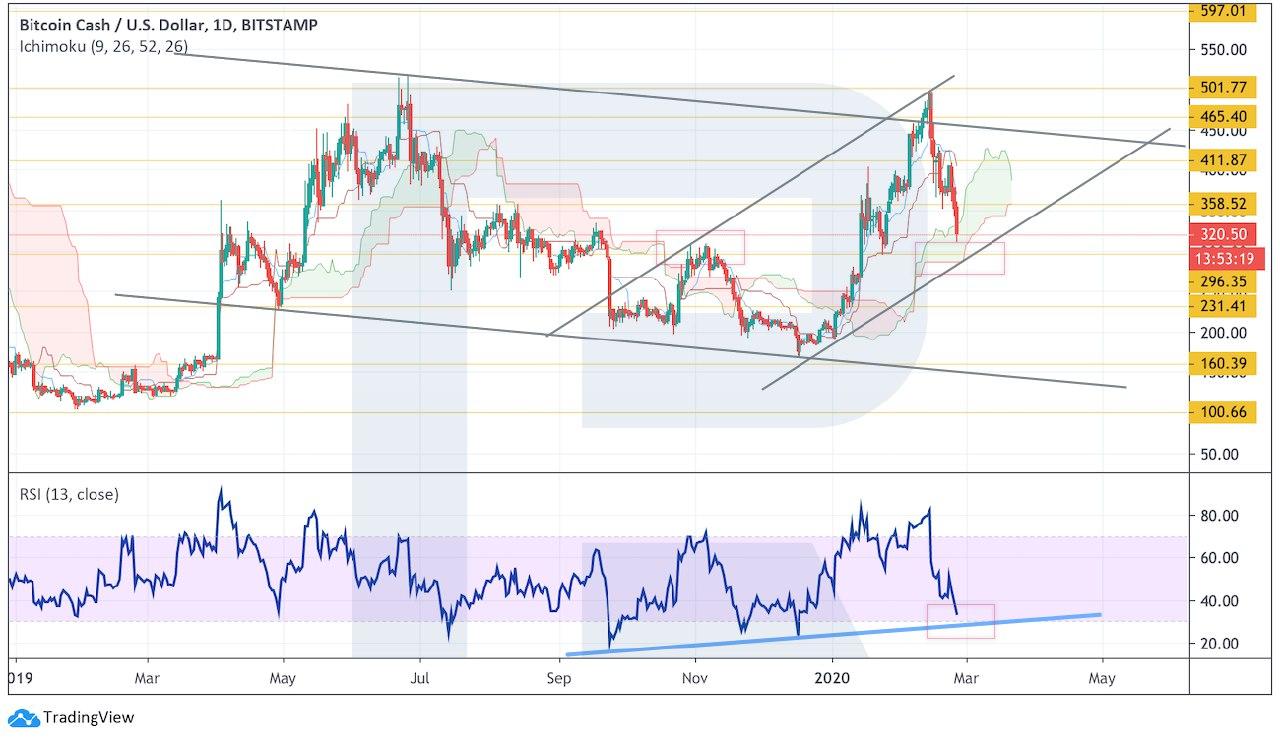 On H4, the prices have bounced off the lower border of the Ichimoku Cloud, which indicates a descending impulse. However, here as well we can see the support level close by on the price chart, as well as a potential test of the support line on the RSI. Such factors indicate a possible bounce off the support area and the beginning of growth of the price with the first aim at $411. The growth will be confirmed by a breakout of the upper border of the descending channel and securing above $365. In the case of a breakout of the support level and securing under $295, we should expect further falling to $230. 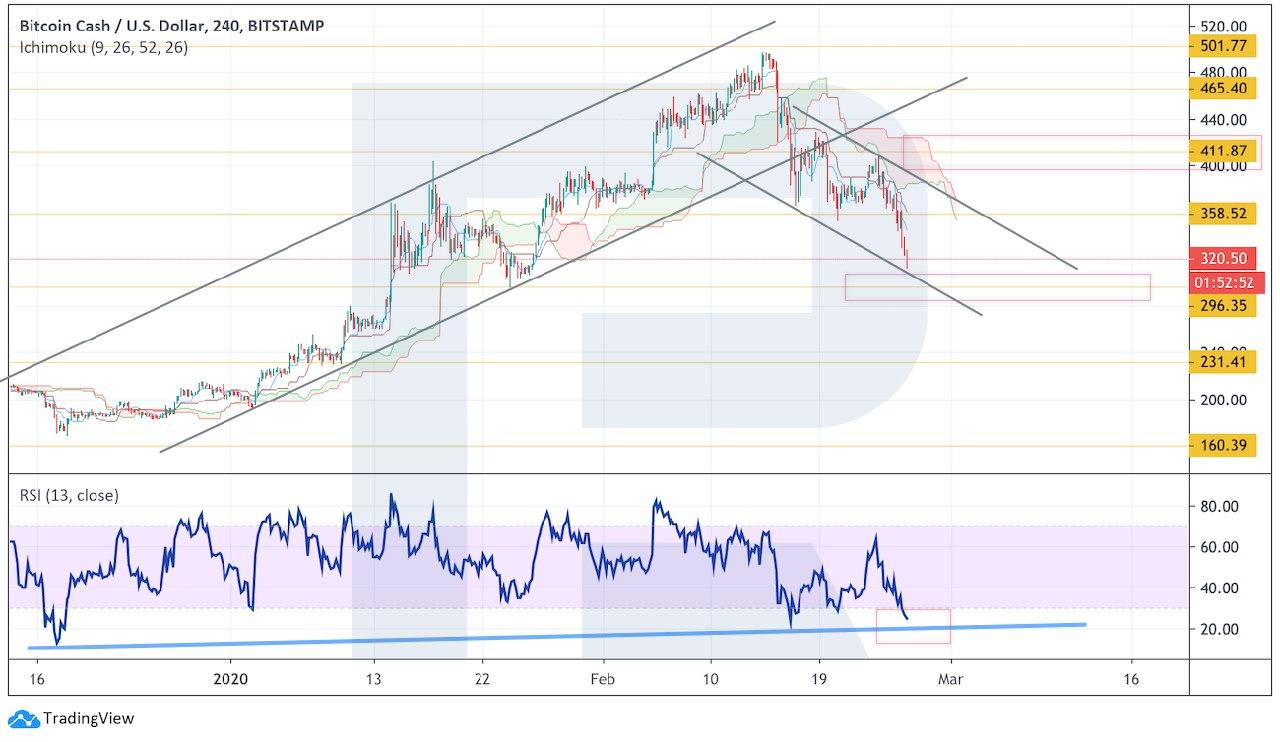 The expiration of $328 million in BTC derivatives can lead to more volatility. Now Bitcoin price has gone slightly below the $9,500 level.

The characteristics of immutability, security, consensually and transparency of the blockchain, the technology that supports the Bitcoin system, have made it attractive in many other sectors.

Human Resource and Payroll service Bitwage launches Bitcoin 401(k). The new product is set to help employers meet the PPP requirements. It was rolled out in partnership with Gemini, Kingdom Trust and Leading Retirement Solutions.