The ETH token from the Ethereum project is not immune to the general trend of the cryptocurrencies over the last few days, while the increase to $189 added 2.4% to its value.

Overall, the cryptocurrency market is pressured and this includes Ethereum as majority lost steam for the upside zone. The bullish momentum eased out as buyers look to supply zones to make another entry. The total market capitalization of crypto as of Monday had lost a total value of $ 6.8 billion. Most of the important coins currently remain at supply levels over the last 24 hours, while ETHUSD ended Wednesday at 187.49, gaining $ 0.40 (0.21%).

As at the time of composing, Ethereum (ETH) is trading at $185.06 on the Coinbase daily chart staying above its near term supply zones on the level at $180.71. The ETH token from the Ethereum project is not immune to the general trend of the cryptocurrencies over the last few days, while the $189 increase added 2.4% to its value. It ended the previous week with an increase of about 4.4%.

ETHUSD had begun a fresh session as of Monday, November 11 while displaying precisely the same candlestick on the daily time frame, yet in the opposite trend. It plunged to $184 and lost 2.6 percent. The bulls eased out around the regular old $199.50 demand zone, maintaining its concrete resistance and sealed to be an intense one to break in the present scenario.

Meanwhile, as recently referenced, we can’t expect an enormous breakout from the coin except if it rebound and breakout from the $180.71-$199.50 regions. The diminishing trading volumes (around $7-$8 billion on a 24h period) show an absence of momentum in the present moment. 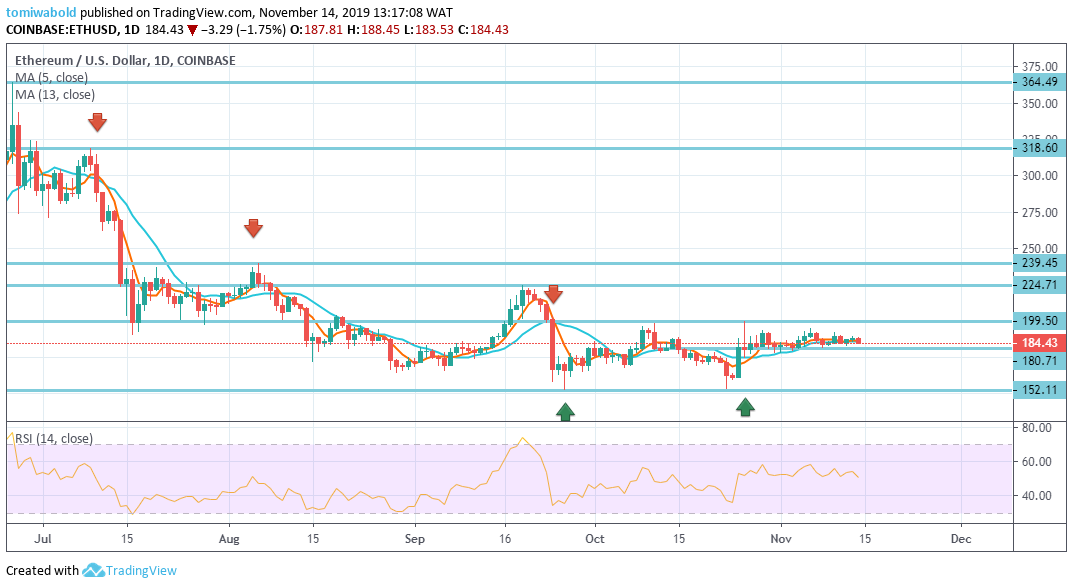 Trending up to $4.28 lower after the open on the level at $ 187.41, the digital currency had managed to trend downward early in the session as bears have taken control and may end the day lower than its opening price.

Ether affirmed its consolidating trend through the earlier sessions after trending up to the level at $189.31 while also easing back to close at $187.72.

The pair had continued to consolidate inside a constrained trading range between the level at $180.71 and $199.50 where it has been trapped now since the last trading week, whereas it displays a long-term downtrend, the short and medium-term outlook has already changed to bullish.