“This is in keeping with Vice President Biden’s strong support of technology and innovation throughout his career,” said the group’s director Joseph  in a statement, according to The Hill.

“Ready your mobile wallet and you’ll be able to simply scan-and-donate. There’s no hassle with a card number, no delay and unparalleled cryptographic security,” Mr. Schweitzer added.

Draft Biden 2016 said it would limit bitcoin donations to $100 per person in light of unresolved questions about how Federal Election Commission (FEC) regulations relate to virtual currency. The website would also require bitcoin donors to identify themselves via an online contributor form. 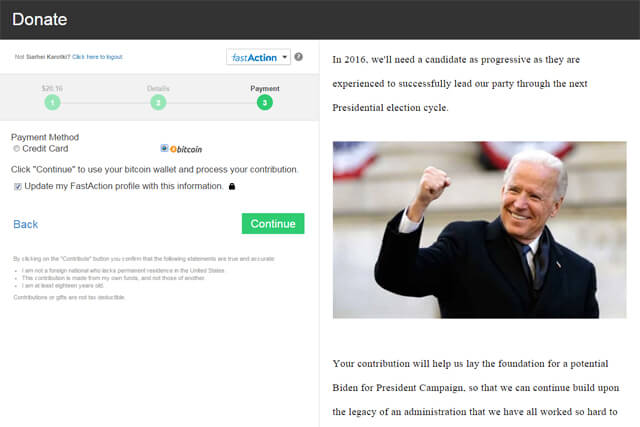 Draft Biden 2016 unveiled a logo (see above) earlier this year depicting the vice president driving a corvette with the slogan “I’m riding with Biden.” The image appears in the same style as President Obama’s iconic “Hope” logo from his 2008 campaign.

The Draft Biden 2016 super PAC was formed in mid-March, and had only $6,500 banked at the end of that month, its FEC report shows.

Joe Biden hasn’t publicly stated whether he plans to seek the presidency in 2016. Should he run, he would compete for his party’s nomination with Democratic front-runner Hillary Clinton, as well as Sen. Bernie Sanders and former Rhode Island Gov. Lincoln Chafee.

In april this year, Rand Paul, the libertarian senator from Kentucky, made an announcement that his supporters have the option of making donations to his campaign using Bitcoin. Rand Paul’s website Stand With Rand will certainly accept traditional payment methods as well, such as credit cards and the online service PayPal. However, so far he remained the first declared candidate in the 2016 race to fund his White House bid with digital currency.

Singapore’s new financial legislation is aimed to increase crypto-related activities in the country. Notable crypto operators and exchanges support the move to obtain a Singaporean license.

A new Market Integrity Working Group, tasked with the responsibility of ensuring fairness and accountability in the crypto space, will be co-chaired by senior executives of both Ripple and Coinbase.

An end to the lawsuit against Ripple hasn’t been put yet. But when it is, will it affect the XRP price? That’s an interesting case to observe.