On March 15, 2021, Dvision Network announced the release of the unique designs of the five limited-edition Non-Fungible Token (NFT) characters, which are intended to be available later this month.

Dvision Network is a VR content blockchain-related platform. Moreover, it is planning to pre-release a limited edition NFT character before the launch of its long-awaited primary NFT marketplace. However, it is scheduled to be released later this year.

More so, Dvision Network will conduct an auction for the five kinds of NFT characters. Notably, characters will include the avatar prototypes of the most renowned celebrities in the cryptocurrency domain.

Added to this, the person who acquires one of these five new NFT characters will be eligible to acquire additional NFT assets from the limited edition series. Besides, these NFTs will be utilized within the Dvision Metaverse in the near future. However, it can also be traded on the primary and secondary markets.

Furthermore, the characters are planned to be auctioned one at a time at OpenSea, the largest NFT Marketplace. In addition, scarcity and uniqueness are the representative qualities of these NFT characters. More so, it will be reflected in their ultimate price.

All in all, users who purchase limited-edition NFT items can directly use those characters within the ecosystem of Dvision Network. Apart from that, the users purchasing NFT items, including the limited edition collection will be subject to the DVI token incentives.

“We intend to supply these sort of unique NFT items to the prospective Dvision Network users in order add the fun elements to their gamified metaverse ecosystem experience, and to let them play joyfully, surfing across the virtual reality and open-world via the usage of the celebrity characters.”

Meanwhile, DVI, the utility token of Dvision Network. The cryptocurrency DVI took to the skies and reached a new all-time high of $0.55 today. According to CoinGecko, the DVI price is $0.505 with a 24-hour trading volume of $973K, at the time of writing. Added to this, the DVI contains a maximum supply of 1,000,000,000 DVI coins.

Currently, the top crypto trading platforms for DVI are Bithumb, Uniswap (V2), Hoo, Bilaxy, and Coinone. Even more, DVI is a good investment in 2021. In addition, DVI has a high possibility of surpassing its current ATH. 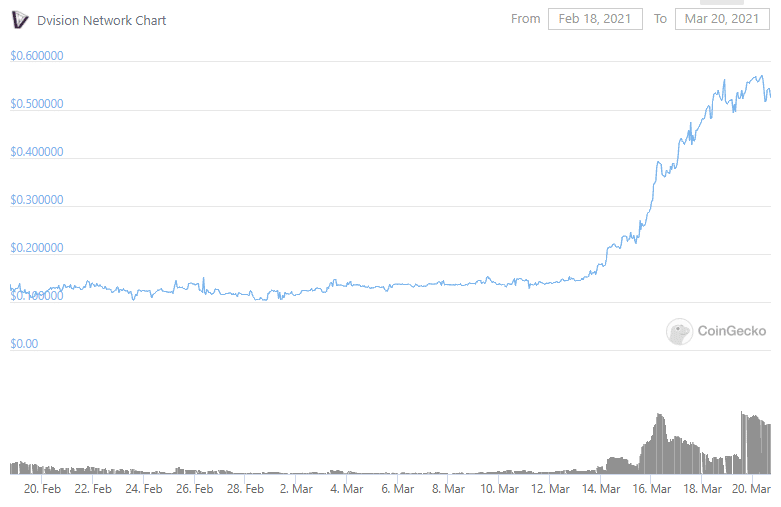 In addition, DVI has been recently listed on the largest domestic cryptocurrency exchange, Bithumb Korea. Moreover, they were listed on the BTC market. On top of that, they took part in Bithumb’s native competition “BTC Open”.

Recently, Dvision network partners with market-leading blockchain oracle solution Chainlink. More so, in order to bring accurate NFT item costing and secure, provably-fair rewards to its VR ecosystem. Even more, the partnership is a game-changer for the VR industry, with a new level of trust and security for the ecosystem, and also the entire VR industry.

Back in 2020, despite COVID-19, Dvision has made strategic and meaningful partners such as Elrond, Chainlink, Matic, IOST, and others 2020. Moreover, Dvision has got very active coverage in global and domestic media outlets.

The Dvision Network started gaining traction back in 2020, when the NFT trend boom was only commencing. Moreover, Dvision Network is a blockchain-based VR content ecosystem, which powers the NFT marketplace within their virtual reality. To be more specific, Dvision Network’s powers three important platform pillars, which can be explained briefly. Firstly, as an NFT marketplace (VR-Market) in which users can create and trade their unique items, including avatars.

Secondly, Tailored Virtual Reality (VR-Space) in which users are permitted to customize and acquire the virtual space. Moreover, the VR-Space concept is similar to the LANDs in The Sandbox. Lastly, the collection of VR-Spaces (VR-City), is essentially an open public VR world in which users can enjoy the metaverse with other users, switching between different virtual spaces.