At the time of writing, Ethereum price is at $148. For the 3rd subsequent day, ETHUSD aims to breakthrough the upside barrier on the level at 150.00.

The past week has been anything but positive for the cryptographic industry. Ethereum, the second-largest market capitalization cryptographic asset, also recorded an 8% dump, marking a downward period for the market. Incidentally, the market fell just after the People’s Bank of China revealed that the central bank would close all local encryption centers.

Speaking of Ethereum, despite the drop, ETH’s fees have increased by 21.6% over the past week. As observed in the main markets, the increase in fees is due to the traffic observed on ERC-721 transactions.

Ethereum stays beneath strong downward pressure after collapsing below the monthly October trading floor as a result of the broader decline in the digital currency market. In the future, a lingering weakness below the $ 150.00 level will be bad for ETHUSD’s trending sentiment. The bulls must hold a major rally above the $ 180.00 level to encourage traders to buy ETHUSD again.

ERC-721 transactions were found to fill the ETH blocks quickly and congestion on the network increased ETH charges. Besides, it was also reported that average fees for some blocks exceeded $ 30, but returned to normal over the next 24 hours. 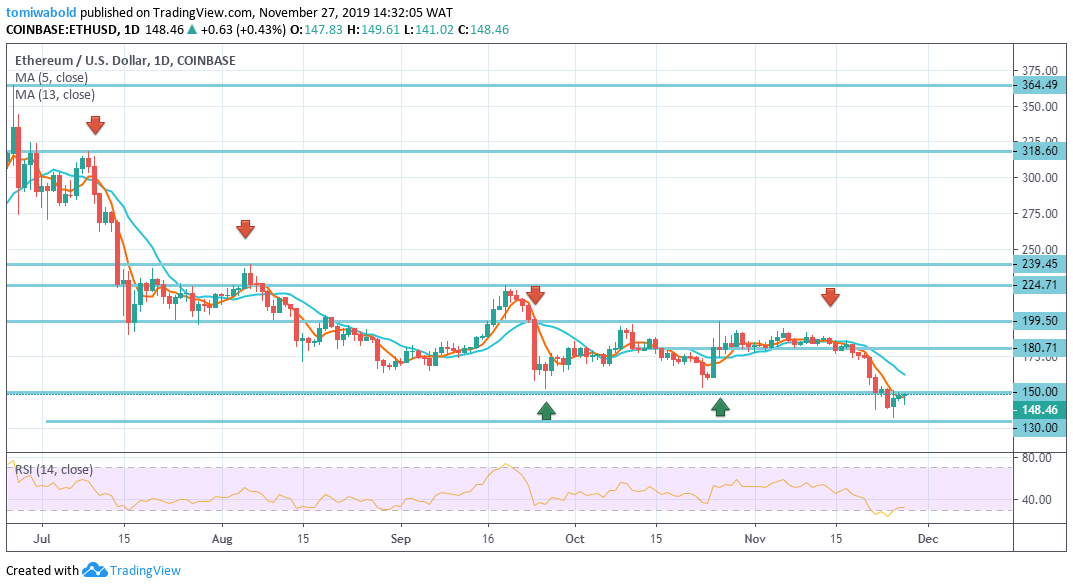 Aiming to Break through 150.00 Level, ETHUSD Trends Past Prior Days Low

Extending for the 3rd subsequent day, ETHUSD aims to breakthrough the upside barrier on the level at 150.00. Trading up to the level at 149.61 higher after the open, ETH managed to reverse during the session as bears took control and may exit the day below its opening price.

After trading lower again, ETHUSD price has missed to decisively move beyond the previous day’s upper trading level as it failed to hold on to earlier gains.

During the early trading day, ETHUSD price traded past below the prior days low, unable to trade above the previous day’s high.

At the time of composing the ETHUSD price is at 148.78, trading close to the key technical support turned resistance zone on the level at 150.00.

The outlook stays bearish while displaying an intact downtrend in the short, medium and long-term.

Related Articles
News, Work It How Does Proof of Reserves for On-Chain and Off-Chain Assets Work?
By Steve Muchoki January 27th, 2023