Manhattan Attorney General ordered to bring the Ethereum Foundation member to court for spreading his knowledge during a cryptocurrency conference in North Korea.

The United States Attorneys in New York, together with the FBI agents, went on to issue a criminal complaint charging Virgil Griffith, Ethereum Foundation member. He is suspected of helping North Korea to prepare better measures of defense against the infamous U.S. sanctions.

Not only the guy decided to travel to North Korea at his own expense, he was moving in the “vacation” style. He also delivered some tech presentations with consulting while he was in the country. He taught the locals about the ways of subverting the capitalist plans by using blockchain tech. As soon as Griffith arrived at the airport, agents seized him. Virgil was sent to Los Angeles, where he was immediately put under arrest. He would be waiting there till the federal court hearings take place a few hours later.

“As alleged, Virgil Griffith provided highly technical information to North Korea, knowing that this information could be used to help North Korea launder money and evade sanctions. … In allegedly doing so, Griffith jeopardized the sanctions that both Congress and the president have enacted to place maximum pressure on North Korea’s dangerous regime.”

It appears that the American powers do not see the dangers in their own decisions within the country. In cases like the Ross Ulbricht one, for instance, we have a huge number of young people hating the government after they find out the exact details of the Ross case. Griffith must be a very brave guy since he is a rare westerner traveling to North Korea for scientific reasons these days.

Strangely, the U.S. will try putting this man Virgil to jail for just saying and doing what’s he felt. He just helped those people survive under the old Empire’s unbeatable sanctions and learn something new.

Griffith was Traveling despite Official Restriction

John Demers, the Attorney’s assistant, says that Virgil Griffith is a U.S. citizen who lived in Singapore. He received a note asking him to abandon his will to travel to North Korea. Because this country is probably the worst enemy of America, sanctions are the best way to keep those people scared. Because it is viable for the Ethereum’s ecosystem, the functionary thought he would be traveling there as a spy and nothing will happen. Although he understood that such an idea isn’t going anywhere good.

The document outlines the numerous horrific dangers starting with the funding of the nukes development (they forgot about the bio-weapon this time) and continuing to the standard “a whole world must fear” package items. It reads:

“We cannot allow anyone to evade sanctions, because the consequences of North Korea obtaining funding, technology, and information to further its desire to build nuclear weapons put the world at risk.”

The Attorney, as well as the FBI agents, somehow decided that Mr. Griffith can horribly damage national security. At the same time, they forget the fact that there’s the Internet over there. Anybody can learn almost anything via the web in a straightforward and fun manner. No matter for what reason, the government is acting as if Griffith is a grand spy, not some Ethereum-related hipster.

Griffith was mentioning the fact that he plans to travel via his Twitter. Somebody asks him whether it’s a good idea to go to such a “totalitarian” country. And he answers: “Probably not.”

Griffith was inviting more people to go with him, citing a minimalistic total cost of 3300 EUR per week. He also said he can’t take Japanese, Israeli, and South Koreans. Buterin wishes him to enjoy the travels. 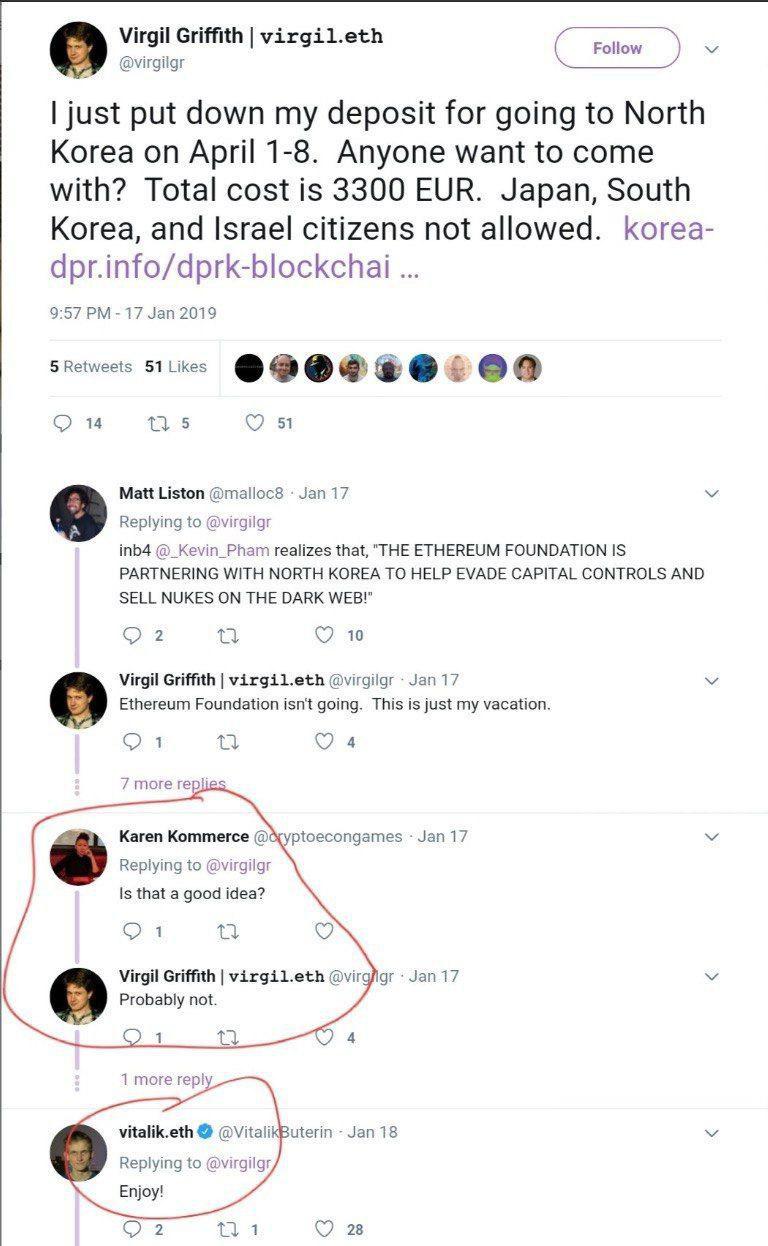 According to the documents, he was traveling to a mysterious “Pyongyang Blockchain and Cryptocurrency Conference.” Griffith visited North Korea while knowing that this may cause massive troubles for him. He ignored the possibility of obtaining the OFAC license to do technology-related business in the DPRK.

Now, Mr. Griffith may face up to 20 years in prison, but Congress can give him even more.

While Ape staking is slated for less than two weeks, it will only be available in selected countries, with the United States and Canada among the omissions.

The markets, however, witnessed a significant sell-off due to the chaos created by the tweets regarding WETH’s insolvency.

Buterin suggests using cryptographic proofs to show there are enough funds at all times on change to cover any liabilities to users.