On Thursday, the ETH price is up and the coin is trading at $396. The cryptocurrency is looking quite good and even confident.

As we can see in the weekly chart, after breaking a long-term resistance line, the current rising impulse was stopped not far from fractal highs. This situation may be considered as a short-term correction. The key support as a correctional target is at $235.00 USD. The ascending dynamics of the MACD and Stochastic lines indicate a potential for further growth. 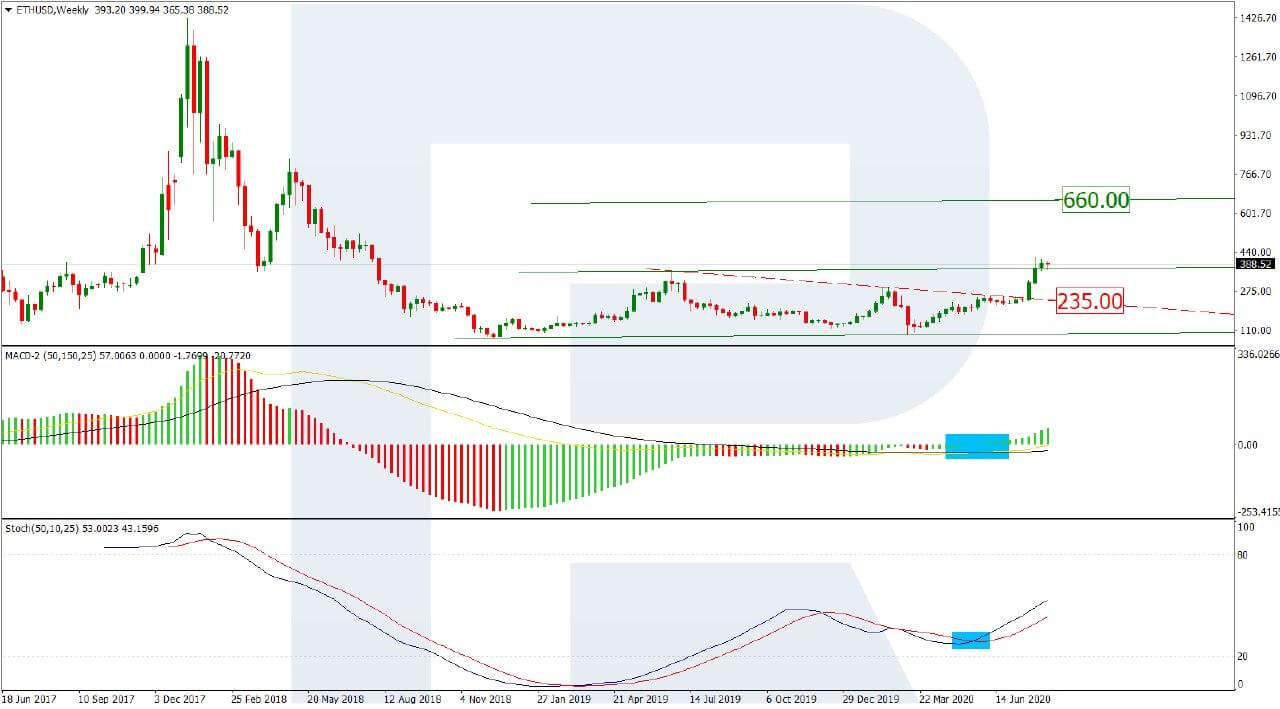 In the daily chart, ETH/USD is forming a rising channel. After testing the resistance line, the previous ascending impulse rebounded from it and started a new correction to the downside. The correction is taking the form of a Triangle, which means that the price is stuck between converging support and resistance lines at $364.70 and $396.85 respectively. The red histogram confirms the correction idea and may indicate its primary stage. The MACD lines are directed upwards, thus hinting at the potential for further growth. 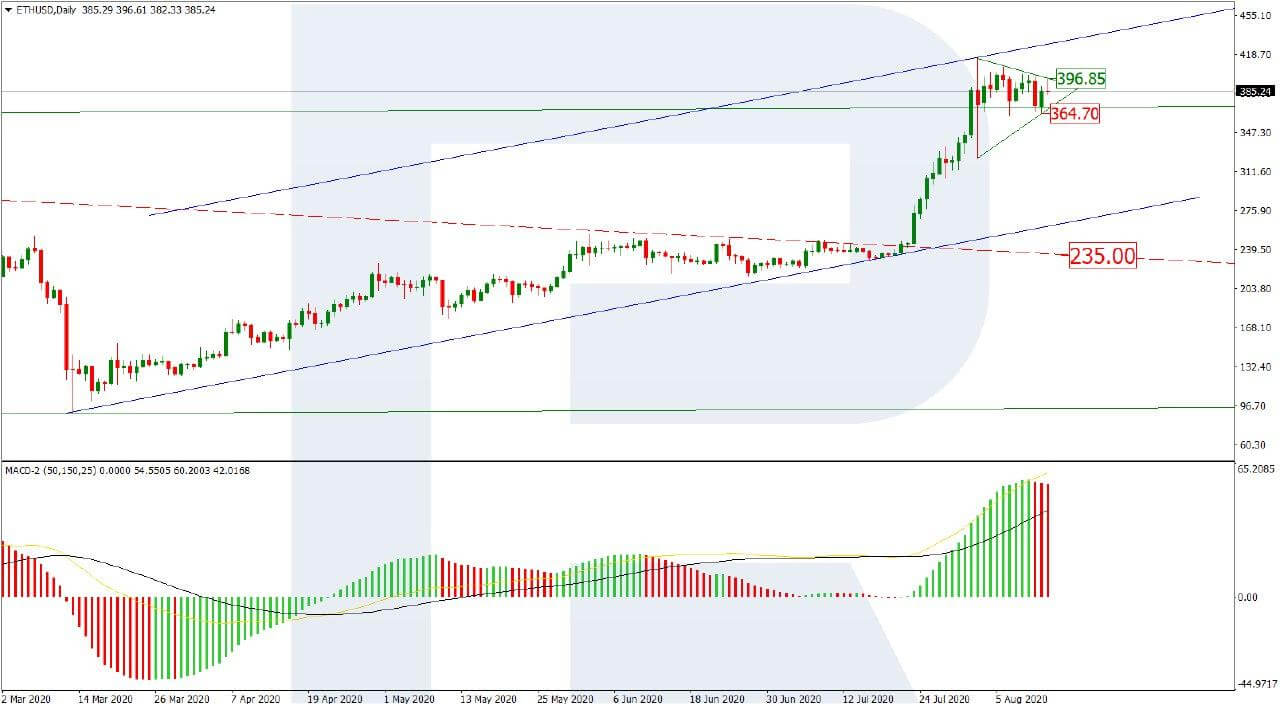 The H4 chart shows a more detailed structure of the current correction after a divergence on Stochastic. The indicator is directed to the downside, thus meaning a high probability of a breakout of the support area at $364.70 and the following decline towards 50.0% and 61.8% fibo at $322.26 and $300.23 respectively. However, one shouldn’t exclude a possibility of a breakout of the resistance area at $396.85 because in this case, the asset may continue trading upwards to reach the high at $415.26 or even break it. 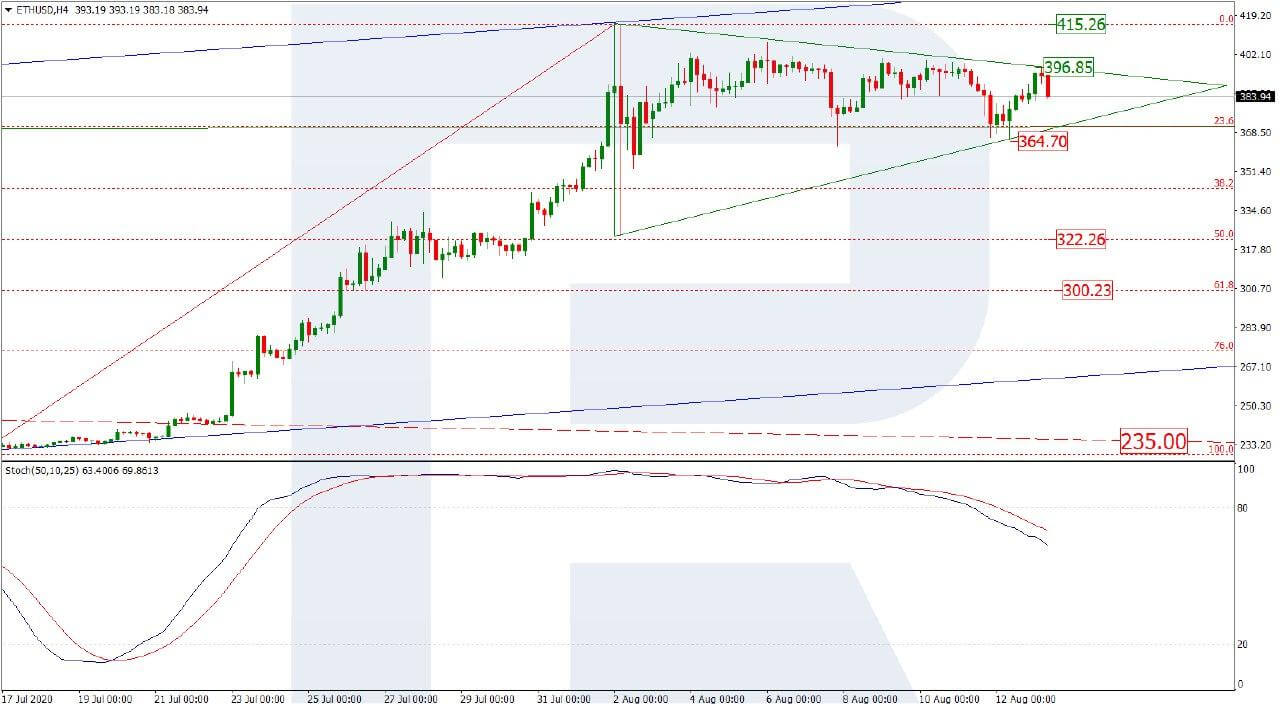 According to Blockchair, an average commission in the Ethereum network increased by 17 times over 2 and a half months and now equals approximately $7.4 per transaction, which is a new all-time high. For comparison, in July, the commission per transaction was rising but remained under $2-3 USD. Recently, it has passed $20.

Market players say that this increase is directly connected with the network utilization and growth in the popularity of decentralized applications and projects. For example, operations in Uniswap are performed directly between users but transactions are processed by the Ethereum network, thus increasing the network load. Hence, a higher commission.

As it has been known from Glassnode and Etherscan researches, a hash rate in the Ethereum network reached the highest level over the last 20 months amid a rally of tokens in DeFi applications. Now market players believe that it may give rise to the ETH price as well due to a strong fundamentally-positive catalyst.

During the last weeks, demand for ETH skyrocketed and the number of users, who are using DeFi-based applications, has been rising since the mid of July. As a result, it led to the network overload and influenced both hash rate and commissions.