Elon Musk recently tweeted that he purchased his Shiba Inu and that he named it Floki. Within minutes of that tweet, Floki Inu’s price pumped over 100%.

Floki Inu recently announced a partnership with the Million Gardens Movement, a Kimbal Musk initiative, which is a movement working to give power back to the community to choose, grow, prepare, and eat healthy food. Under a month after announcing that partnership, Floki Inu just pledged to donate $1.4 million following an extremely successful donation drive.

Floki Inu knew, from the inception of its partnership with the Million Gardens Movement, that it wanted to make a big difference through a big donation. To help achieve that goal, it created its own brand of non-fungible token avatars named Flokitars. On September 18, 2021, Floki Inu released its 10,000 Flokitars to the public. It announced that all proceeds generated from the sale of these Flokitars would be donated to the Million Gardens Movement. 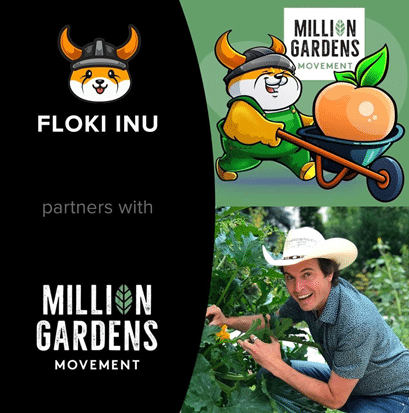 In about 35 minutes, Floki Inu raised over $1.4 million dollars and completely sold out of its Flokitars. As promised, all of those funds are being donated directly to the Million Gardens Movement to help them achieve their goals in giving power back to their communities.

Kimbal Musk was quick to recognize this generosity. In a tweet to one of the founding members of Floki inu, Mr. Musk expressed his appreciation saying that the donation would “help so many kids, teachers and families learn gardening at home and in schools.” In the same tweet, Mr. Musk stated that he was watching the SpaceX capsule land and couldn’t “believe [the] awesomeness in this world.” Mr. Musk is no stranger to Space X, being the brother of its CEO, Elon Musk. 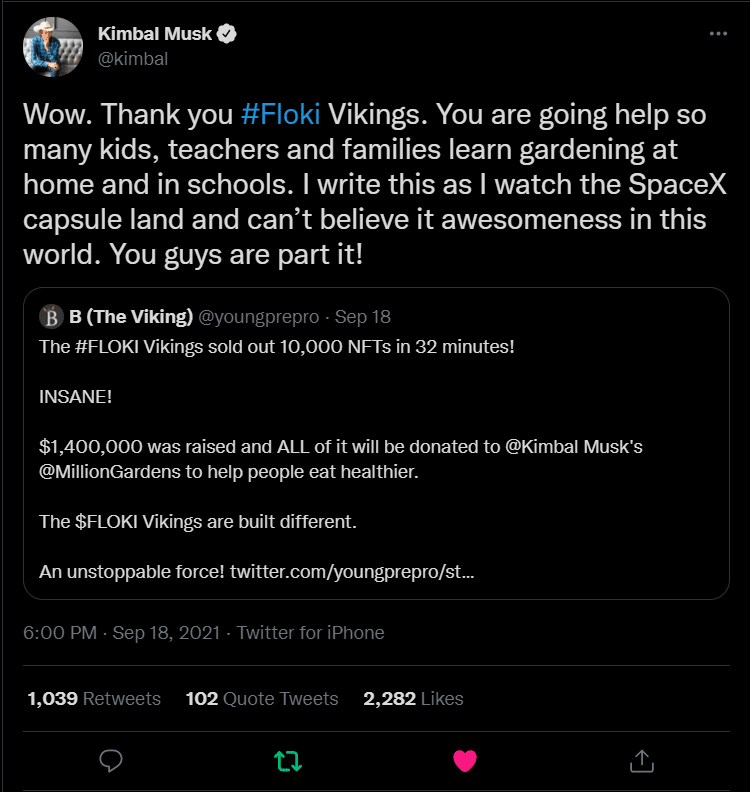 In its continued effort to be a light in the world, Floki Inu is leading an initiative known as blackout Tuesday. Its message is simple: “We are Floki.” This deceptively simple phrase means that everyone can be a part of the movement which is Floki Inu. Floki Inu is a collection of all types of individuals, from a multitude of races, religions, ethnicities, and genders.

Floki Inu, at its heart, is a movement. It strives to give power back to its community by allowing them to take control of their finances. Born from a meme – Elon Musk’s dog – Floki Inu strives to be a force in the cryptocurrency market. In that initiative, Floki Inu welcomes all people.

During blackout Tuesday, most of Floki Inu’s partners will be posting throughout social media the simple message “We are Floki.” For a moment in time, Floki Inu wants to bring the individuals of the world together for their common movement of accepting everyone as they are.

Flok Inu is a movement created from a tweet. The ability of eccentric billionaire and self-acclaimed Dogefather Elon Musk to move the markets is unparalleled, and this time around it is with a cryptocurrency called Floki Inu. Floki Inu, which trades under the ticker FLOKI, is the first token to launch months ago when Elon Musk tweeted that he would be buying a Shiba Inu and that he would be naming it Floki.

Elon Musk recently tweeted that he purchased his Shiba Inu, and that he named it Floki. Within minutes of that tweet, Floki Inu’s price pumped over 100%. This is just the beginning of the incoming parabolic growth. Elon Musk now owns a Shiba Inu, he named it Floki, and he will continue to tweet about his new puppy. This is huge for this token.

Capitalizing on this development, Floki Inu has ramped up its marketing efforts. In anticipation for this marketing push, Floki Inu has recently listed on top ten ranked exchange, according to Coinmarketcap.com, Gate.io. Gate.io was responsible for $1,000,000,000 in daily trading volume for SHIB during its major pump to a multi-billion-dollar market cap token.

Floki Inu will also be lighting up the New York Time Square sky with a billboard lasting from September through the end of the year. Floki Inu is attacking every major metropolitan area across the globe, including London, Miami, Los Angeles, Dubai, and many more, so keep a lookout for future marketing announcements.

In addition to major marketing campaigns, Floki Inu will be prominently involved in the Miami Crypto Conference in November. The event will be held on November 10-12 in the heart of Miami. Floki Inu will be showcased in the most strategic location during this conference. It will also be participating in the featured panel and workshop of the conference. Besides headlining the workshop, it will also have 6 – 8 different workshops during the duration of the conference. This will be a huge push in bringing Floki Inu into the mainstream of crypto.

The governor noted that Elon Musk is opening Twitter up for free speech, and Apple wants to take that away from him.