Following the excitement around The Merge upgrade, institutional interest in Ethereum has been picking up strongly. ETH breaks past its crucial resistance and is trying to approach $1,700.

All eyes have been on the world’s second-largest cryptocurrency Ethereum (ETH) which has delivered a phenomenal price rally over the last week. Ether (ETH) gained more than 40% this week and is currently trading at $1,582 levels with a market cap of $191 billion.

As per crypto market Cumberland, institutional players have been building up their Ether (ETH) long positions after the market rally this week. The Chicago-based firm said that despite a mild pullback, the buying interest remains intact. Furthermore, the global macros have had little impact on ETH technicals as of now. The firm tweeted:

“This move has been crypto-fundamental: the Sepolia testnet successfully merged to proof-of-stake on July 6th, setting the stage for an early-autumn mainnet merge. Portfolio allocation to ETH is hardly oversubscribed at the moment, so it doesn’t take much flow to move the needle. We’re seeing that flow through our OTC desk and via API: buy/sell ratios have tilted long over the last week, and the buyers have been institutional”.

ETH has been rallying strongly after developers announced that The Merge upgrade on the Ethereum mainnet will happen by mid-September. The upgrade refers to Ethereum’s transition from a Proof-of-Work (PoW) blockchain to a Proof-of-Stake (PoS) consensus mechanism.

On Thursday, July 21, Ethereum co-founder Vitalik Buterin appeared at ETH CC in Paris speaking about the Merge. He also talked about the roadmap and previously mooted benefits that the upgrade brings along.

As per on-chain data providers, Ethereum whales addresses with 1K to 10K ETH have decreased the holdings. With exchanges and liquidity pools being part of this group, there’s couldn’t be real dumping. However, addresses in this group have seen their balance decreasing.

On the other hand, the 10-100 ETH group is slowly but growing. The data provider noted:

“Ethereum’s richest traders have shown interesting behavior on this rise, with declines on their portions of $ETH‘s total supply. However, it can be deceptive with liquidity pools & exchange addresses among the groups. Read our take on what to watch.” 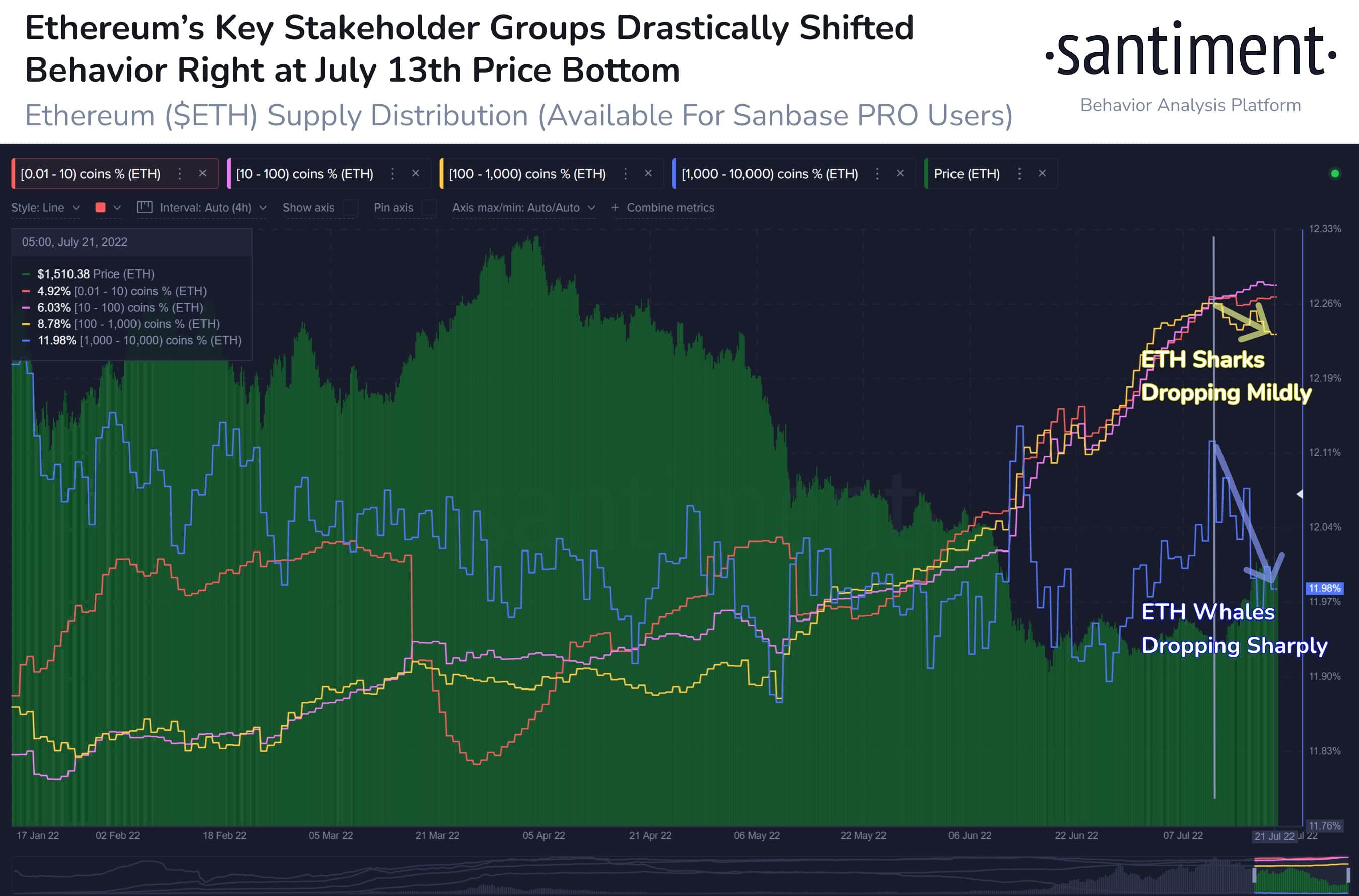 As of press time, ETH is trading close to $1,600 moving past its crucial resistance of $1585. If ETH manages to sustain above these levels, we can see it rally further up to $1,700.

The recent surge in the Ethereum options open interest comes amid all the positive developments leading to the Ethereum Merge next month.

While Coinbase is the first one to declare a pause on any depositary or withdrawal actions, it won’t be the last one.

The emergence of Ethereum 2.0 is billed to change a lot of things for Ethereum in the coming days and while the merits are innumerable, there are also defined demerits that can surface.

US Inflation Slid Below Expectation as Bullish Sentiment Engulfs Market