The Tron cryptocurrency head Justin Sun and Berkshire Hathaway’s Warren Buffett got dinner together, this time without major announcements.

Justin Sun has finally met the legend of Western Business. According to Justin’s Twitter, he had a charity dinner with one of the most famous business sharks in the world. Every year since 2000 Warren Buffett is auctioning one dinner with himself to help out the poor.

Justin Sun of TRON Foundation was the man who pledged the biggest sum only to have the chance to talk to a legend. After the dinner, Sun sends the rays of appreciation to Buffett for his rare business advice:

“It was an honor and I’m grateful for Mr. Buffett’s dinner, wisdom, and vision”

Considering that Sun is a young entrepreneur and Buffett is very old, yet fueled with knowledge, the $4,5 million bets is understandable.

Justin had the opportunity to talk to Warren in the private country club picked by a business shark in Omaha, Nebraska state. Despite the Dinner happened on January 23, the photos are on the public only now. This is presumably because Sun was instructed by his lawyers not to over-announce the dinner. Previously, he announced the dinner with Buffett at the beginning of 2019. This has led to Chinese police questioning Sun regarding his plans to talk to a ‘capitalism star’. Not only he wasn’t allowed to leave China, but he also got some kind of a ‘notification’ from the Chinese regulators.

However, the dinner with Buffett happened – this time, there were no announcements and presumably will be no consequences. It didn’t raise the price of any currency and Buffett didn’t make any extraordinary claims, as well as Sun. They discussed Tesla, modern business and BitTorrent.

The BitTorrent project is preparing for some major roll-out in recent days. BTFS cannot be the ‘first’ decentralized storage system as there are things like Siacoin and Storj out there. But still, its a pretty big announcement.

And the second attempt to meet Buffett may be considered as the PR move for it. Or, maybe Buffett wants to participate in the development of the BitTorrent ecosystem, that’s why he and Sun took a risky chance moving to a secretive dinner.

Charlie Lee, Helen Hai and Others Joined the Party

Looks like Sun has convinced Buffett that his friends are a good company. Indeed, from the photo we can see in Justin’s tweet, Litecoin founder Charlie Lee and the head of Binance Charity Helen Hai were at the meeting too.

Charlie Lee is famous for creating a ‘clone of Bitcoin’, then hyping it from $1-2 per coin to more than $200 per coin, and then dumping all his stash on the top. Litecoin price experienced a significant fall after the grand dump. However, Charlie Lee said that it is all about market demand and laws and he didn’t dump his stash to dump the price. He said that he dumped it to ‘avoid allegations of centralized control over the coin’. Sure, why not?

Helen Hai is a person making the hearts of crypto journalists warmer. Before working at the Binance Charity department, she was working at the Chinese shoe manufacturer in Africa. 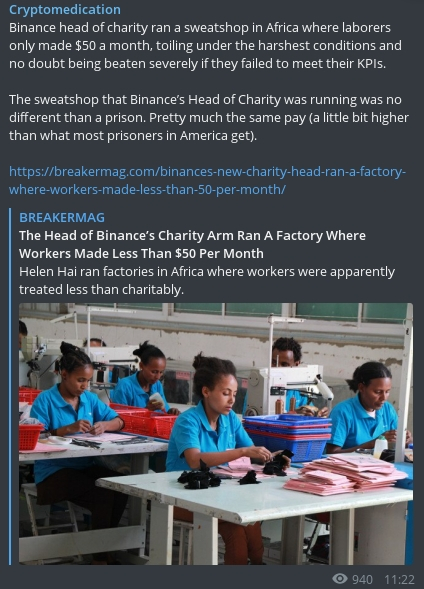 In April 2019, the famous Cryptomedication Telegram channel, together with Breakermag, pointed on the fact that she is the manager (or the manager of the manager) who was beating up the poorest black people on Earth, for missing the deadlines.

Worth noting that Buffett is famous Bitcoin skeptic who calls the first cryptocurrency a soft-headed investment and a ‘rat poison squared’.

Fireblocks has added support for TRX and all TRC20-based tokens of the TRON DAO blockchain on its institutionally-focused digital asset platform today.