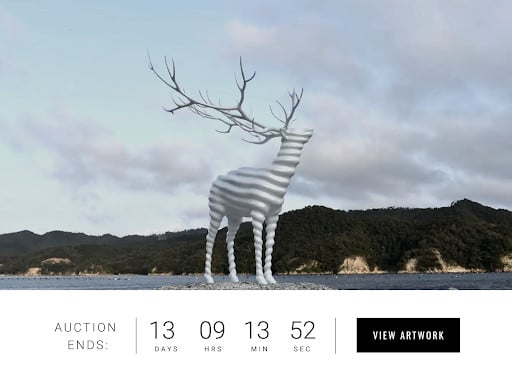 TRiCERA, a global art marketplace announce the release of the NFT version of “White Deer (Oshika)” by one of the most famous sculptor Kohei Nawa in Japan.

TRiCERA will be selling an NFT data package including the original 3D data of Kohei Nawa’s sculpture “White Deer (Oshika)” and an installation video in the Oginohama area of Ishinomaki City, which was damaged by a great earthquake.

Kohei Nawa is a Japanese sculptor exploring digital culture and contemporary spirituality. He is best known for his PixCell series, in which he creates works by covering found objects such as taxidermied deer with an intricate layer of glass beads, prisms, glue, plaster, and spray foam. Kohei is inspired in part by digital pixels—which use light to construct images – as a conceptual gesture, thereby making his sculptures a real-life analogue to the digital image.

“White Deer (Oshika)” is a sculptural work that reinterprets the “divine deer” depicted in ancient Japanese mythology using modern technology. It was unveiled at the Reborn-Art Festival 2017, a comprehensive art festival of art, music, and food held in Ishinomaki, Miyagi Prefecture, and installed in the Oginohama area of the Oshika Peninsula, where many deer live and the place where pain still lingers after tragedy of tsunami in 2011.

White Deer (Oshika), a messenger from nature, appears in the human village with questions for human society, and waits for the coming of spring with its horns that have grown long.

This release aims to permanently install the “White Deer (Oshika)” in Oginohama, which is scheduled to be exhibited for a limited time until 2027 in consultation with Ishinomaki City. A part of the proceeds will be donated to the Reborn-Art Festival Executive Committee to fund the maintenance of the sculptural work. Together with the artists, we will explore new ways for public art to cross the real and virtual worlds. We look forward to your participation in this completely new initiative for NFT in public art.

“This project is a question of what public art is and what the meaning of social sculpture is for us in this new era. When an art festival or art space is created, the artists try their best under various pressures and a limited budget. When I thought about how to maintain and manage these miraculous works, which can only be created at the right moment, and how to pass them on to the next generation, I began to see the social significance and role of NFT.”

“We feel very honored to be able to announce this initiative with Mr. Nawa, one of the most prominent artists in Japan. TRiCERA believes in the infinite potential of NFT and has been discussing how to incorporate it into contemporary art for a long time. This project was born out of a dialogue with Mr. Nawa, and we have discussed how we could incorporate public art in NFT. I believe it has become a project of great social significance.”

Sale will be available here.

*.obj is one of the 3D data formats. To preview it, you need 3D software such as Blender.

Kohei Nawa is a Japanese sculptor exploring digital culture and contemporary spirituality. He is best known for his PixCell series, he creates works by covering found objects such as taxidermied deer with an intricate layer of glass beads, prisms, glue, plaster, and spray foam. The artist is inspired in part by digital pixels – which use light to construct images – as a conceptual gesture, thereby making his sculptures a real-life analogue to the digital image.

Born in 1975 in Osaka, Japan, Nawa studied at the Kyoto City University of Art where he received his BFA and PhD in fine arts and spent one term as an exchange student at the Royal College of Art in London. His works can be found in the collections of the Museum of Contemporary Art in Tokyo, the Metropolitan Museum of Art in New York, and the National Gallery Victoria in Melbourne, among others. Nawa lives and works in Kyoto, Japan.