A bearish dip is underway as both Bitcoin (BTC) and Ethereum (ETH) are parring off losses following an earlier takeover by the market bears. The ongoing slight gains from both digital currencies have resulted in a 1.36% gain in the total cryptocurrency market capitalization, a metric that is currently at $1.81 trillion.

The effect of the earlier drop in the price of both BTC and ETH is having its toll on the broader market, with the top ten cryptocurrencies showing mixed market momentum. While Cardano (ADA) remains the biggest loser, trading at $1.281, down 12.36% in the past 24 hours, the encompassing dip, did not stretch to decentralized finance (DeFi) tokens including Uniswap (UNI), and Polkadot (DOT).

As the market is looking to head into the weekend, there is the likelihood of increased activity, as the closure of the stock markets may stir more investors to trade the cryptocurrency market. The anticipated inflow will have a subtle underlying influence on total market volume, and price moves. With Bitcoin and Ethereum retaining their highest daily trading volumes of all digital currencies, there may be a flip in both coin’s prices in the next few days.

Bitcoin and the Attached Importance

Bitcoin is trading at $58,480, up 0.56% according to CEX.IO data. The coin’s increased volatility is reflective of the actions of the market sellers and bulls straightening out. The coin has a bigger price dip percentage in the early hours of Friday, but some of these losses are currently being parred off.

Bitcoin has enjoyed incredible recognition as the world’s largest crypto, a factor that is fundamentally responsible for the embrace the coin is receiving. A recent report from a German multinational investment bank and financial services firm, Deutsche Bank highlighted that Bitcoin’s $1 trillion market capitalization has now made the asset too important to ignore.

The bank noted that in line with the Tinkerbell Effect, Bitcoin’s price will either continue to rise or fall depending on people’s perception of its value per time. Today, the growth of Bitcoin by over 50% since the turn of the year, and by 986.6% year-on-year is sure to keep the longer-term prospects of Bitcoin bright. There is a growing interest to hold BTC from investors, both those of the retail and institutional climes, an adoption that Deutsche Bank notes is capable of increasing the coin’s valuation.

On the weekly BTC-USD chart as seen on TradingView, the 9-day Moving Average is bullish, showing a clear bullish run from the low of October 2020. 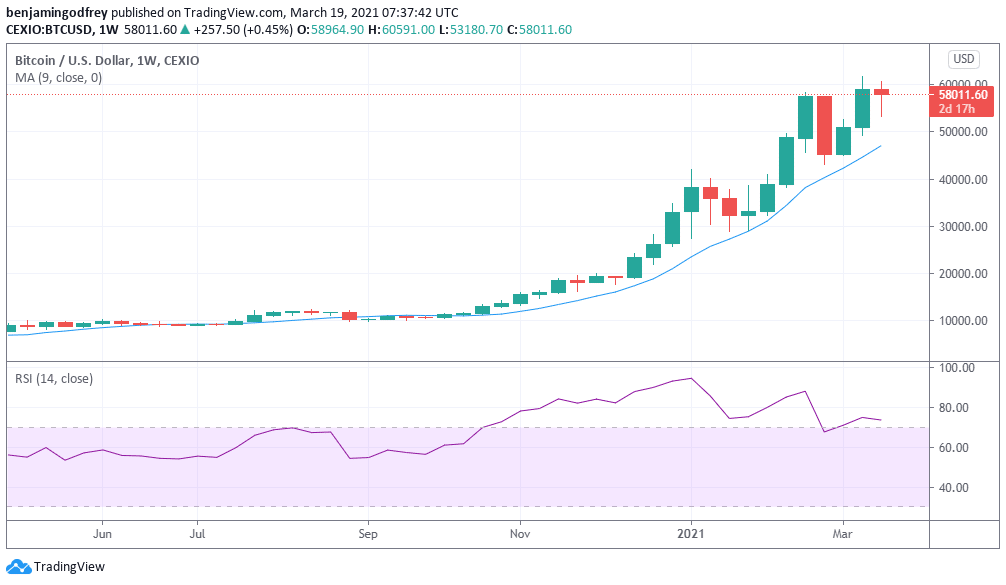 Despite the intermittent volatilities seen in the price of Bitcoin, the premier digital currency has a positive perception based on its sustained performance over time. With the technical indicators pointing bullish, Bitcoin can without hassles hit a price target of $65,000 before the end of the first quarter.

Ethereum, the world’s second-largest cryptocurrency by market capitalization has an almost similar price trajectory with Bitcoin. The coin is down 0.49% to $1805.99, with the market bears obviously preventing the psychological breakout above the $2,000 price level.

The earlier sell-off in the market is however not reflective of cryptocurrency exchange activity. On-chain data provider Glassnode revealed that exchange inflow volume has just reached a 1-month low of 15,477.056 ETH. From precedents, investors and traders often move their holding into exchanges in a bid to either liquidate or take advantage of some yield farming staking incentives the exchanges provide.

With Ethereum is obviously not going into any of these schemes, the plausible explanation is that most of the Ether in circulation are either being HODLed or held in DeFi smart contracts, either of which can help impact the price of the coin positively. 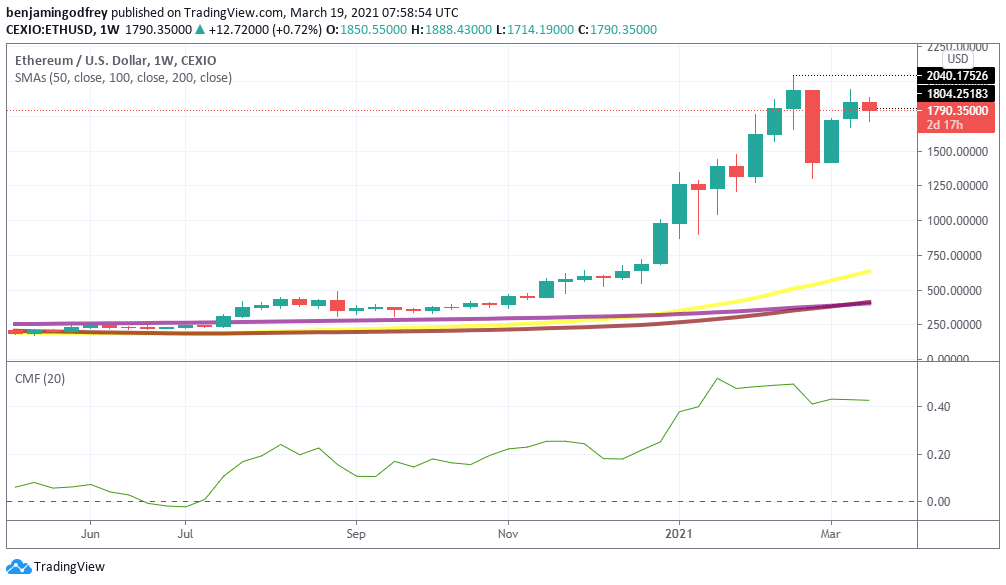 On the weekly ETH-USD chart as seen on TradingView, both the Chaikin Money Flow technical indicator and the closure of the coin above the 50, 100, and 200 Moving Averages is a bullish enough marker to maintain confidence in the longer-term prospect of Ethereum.

Per the metrics seen, Ethereum is poised to liberate itself from the shackles of the market bears and retest its all-time high above $2,000 in a bid to close the quarter at a $2,200 price valuation.

The mini-rally recorded in the last 24 hours is believed to have been caused by the positive movement in Total Value Locked across Ethereum as well as improved on-chain activities.

Ever since Bitcoin price dropped to current levels of around $20k, miners are rewarded approximately $120,000 per successful mined block.

Amid its ongoing financial crisis, Celsius has paid off another sizable sum of its debt to Maker as it fights to stay afloat.