Mars Ecosystem: Are Stablecoins the Reinvention of Money? 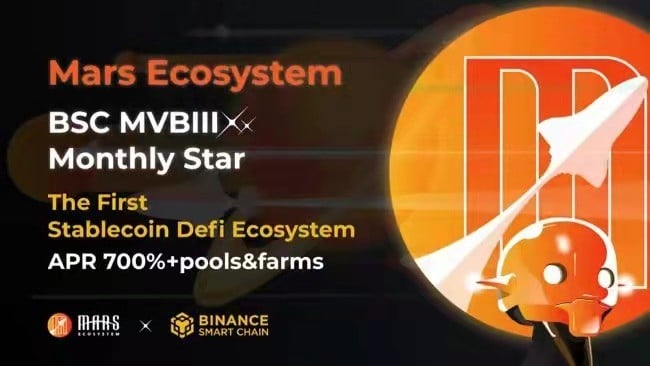 Ruling the headlines on the BSC network is now a norm for the Mars Ecosystem. Armed with some of the highest APRs in the DeFi space and an ever-growing TVL, the team recently earned a Monthly Star in the Binance Smart Chain “Most Valuable Builders” program and is working towards reinventing the utility of Stablecoins. With BSC supporting Mars’ products and technology, it adds a layer of credibility to the constantly evolving Mars ecosystem.In this write-up, we will deep dive into stablecoins and what Mars Ecosystem means to the future of DeFi and crypto.

Stablecoins were first introduced as a blend of stability of fiat currency and mobility of cryptocurrencies. Generally, they are backed by underlying assets or algorithms. Stablecoins ensure that money is borderless and accessible to everyone without the need for a bank or a central authority.

However, with time and usage, specific attributes of stablecoins have turned them into the antithesis of decentralization. Also, they have ignited the fire for the genesis of the Mars Ecosystem and its vision to reinvent stablecoin with decentralization and scalability intact.

Today, most of the stablecoins are overcollateralized which directly affects their scalability. Also, many stablecoins are pegged to assets deposited in centralized systems which effectively goes against the ethos of blockchain technology and DeFi. Though Algorithm-based stablecoins do away with the collateral issues, their price stability is a huge concern.

Currently, every stablecoin protocol has its share of tradeoffs with regards to the three properties. However, all the issues boil down to two key concerns. They are 1. The positive externality problem, 2. The integration problem.

To resolve these, Mars Ecosystem stands apart as a decentralized stablecoin paradigm with an all-inclusive system to capture the true utility of stablecoins.

As a potential solution to the positive externality and integration concerns Mars Ecosystem presents a three-part system. Their efforts are concentrated on producing a stablecoin ecosystem with high price stability, high decentralization, and scalability potential.

These efforts have been recognized by the Most Valuable Builder (MVB), an initiative by Binance Smart Chain to support innovative projects. The Mars Ecosystem was one of the winners of the MVBIII – September Monthly Stars. Also, the Mars Ecosystem will receive key support from BSC, not limited to financial influx. The mentoring and technical assistance provided can be a gamechanger for the Mars Ecosystem.

The three cores of the Mars Ecosystem are:

This is the foundation on which the Mars Ecosystem resides and grows. Its building blocks are $USDM or USD-Mars (Mars Ecosystem stablecoin) and $XMS or Mars Ecosystem Token (Mars Ecosystem governance token). Their treasury is built to support multiple types of cryptos from the likes of BTC to DeFi blue chips.

The team is equipped with minting and redemption mechanisms for the circulation of $USDM. With a set 1:1 ratio, users can deposit their assets into the Mars Treasury to mint $USDM and vice-versa. The circulation of $USDM fuels the value of $XMS which can be used to participate in the governance of the protocol.

$USDM stablecoin can be minted with $1 worth of any of the Mars Treasury white-listed assets. The maximum supply of the $USDM is relative to the market cap of $XMS. This cap in supply is part of their mintage control mechanism which accounts for users’ behavior to ensure the price of $USDM is always stable.

Also, an anti-bank run mechanism has been enabled to protect $USDM from mass shorting and a potential collapse. This is ensured by incentivizing the holding time of the token. Malicious actors trying to encash on the difference in the collateral ratio of $USDM and $XMS fail in their efforts as quick sales are burdened with slippage losses. This makes bank runs an unfeasible activity in the Mars Ecosystem.

This is a series of functionalities being added to the Mars Ecosystem to facilitate transactions, improve liquidity, and enhance $USDM’s utility as a medium of exchange and store of value. First in the series of DeFi protocols is Mars Swap which is an automated market maker-powered DEX similar to Uniswap.

This DEX is designed to provide 24/7 liquidity for $USDM and other DeFi protocols that adopt $USDM as a token of exchange. Also, the transaction fees generated on Mars Swap are pushed back into the Mars Treasury where liquidity providers and $XMS holders and stakers are awarded.

Since $USDM users earn without leaving the ecosystem, the positive externality issue is resolved. Also, the value generated here incentivizes the holding of $XMS which in turn stabilizes $USDM as the latter’s supply is based on the former’s market cap.

September saw the launch of Mars Ecosystem liquidity farms and pools. Currently, the total locked value has crossed $250 million with the average APR being more than 1000% Already, eight pools have been created for users to stake their $XMS and earn BNB, ETH, CAKE, or more XMS as per their preference. Alongside, more than 10 yield farms have been set up for liquidity provision. 0.25% of the transaction fees on Mars Swap go directly to liquidity pools.

Apart from this, they have coupled sustainability with the growth of farms and pools using a linear vesting period. Simply put, the $XMS token allocated to investors (8%) and the team (10%) will be slowly released. This means, as per $XMS’s total supply, 180 million $XMS will be released for periods of 18 (investors) and 36 (team) months. The vesting period will start from our genesis launch which will be held in a month.

Community-first is how the Mars Ecosystem team is approaching the future. Special emphasis will be placed on the direction that their community wants to take, in unison with their roadmap that includes launching more DeFi protocols and incubating nascent projects.

Everyone holding $XMS tokens can participate in MarsDAO and contribute to the evolution of the Mars Ecosystem. Also, they will be opening their NFT collection to the community to purchase alongside a few airdrops for lucky winners. The Boarding Pass NFT and the Captain NFT have been designed to reward those who have contributed to the initial MarsDAO community.

They believe that ‘To the Mars’ will be the new ‘to the moon’ in the crypto and DeFi community. But, in place of the volatility, we will see if the stablecoin $USDM will grow into being the reserve currency of the DeFi world.