Mexico’s central bank is in talks with Amazon to launch a new government-backed mobile payment system that would allow consumers to pay for online purchases using QR codes.

The CoDi payment system built by Banco de México will let users make online and in-person payments through a smartphone without an additional charge. A pilot of the system is expected later this month as it’s said in an announcement.

More than half of Mexico’s population doesn’t have a bank account, which helps explain why online sales only accounted for 4% of retail sales last year.

“Amazon and Argentine rival MercadoLibre have approached the bank about adopting the system. They have also said that they could implement it relatively quickly,”

Cortina added that CoDi was specifically designed so that it can facilitate payments online as well as in stores.

Amazon declined to comment on the alleged deal, but MercadoLibre confirmed their payment department are in contact with the central bank regarding digital payment solutions, but declined to elaborate.

Mexico could follow in the footsteps of other emerging markers such as China, Kenya, and India, where phone-based banking has seen a soar in popularity thanks to user-friendly, affordable apps from private companies.

Only 3.9 percent of retail sales were made online in Mexico last year, according to research firm Euromonitor International, with Amazon and MercadoLibre among the biggest players.

Mexico’s new leftist government under President Andres Manuel Lopez Obrador is betting on financial technology to help lift people out of poverty. Broad acceptance of CoDi would mark an important step in its financial inclusion strategy.

In a press release, Amazon said Alexa learned to speak and understand Spanish tailored for the Mexican market. What’s more, the company said developers around the world were making skills and devices for Alexa for Mexican customers.

“Tens of millions of customers around the world are already using Alexa, and today we’re excited to introduce the service to our customers in Mexico. We’ve built an entirely new experience from the ground up that honors Mexican culture, enabling customers to just ask to play their favorite music, get the news and weather, control their smart home, set reminders, enjoy local skills, and more.

Plus, in addition to Echo, device makers like Sonos, Bose, and Harman Kardon are also launching devices with Alexa built-in. This experience has been custom-made for Mexico, and we cannot wait to hear what our customers think.”

Senior research manager from Euromonitor International, Nikola Kosutic said exclusively for Coinspeaker that internet retailing in Mexico is set to record a current value CAGR of 26% over the forecast period, to reach MXN463.1 billion in 2023. 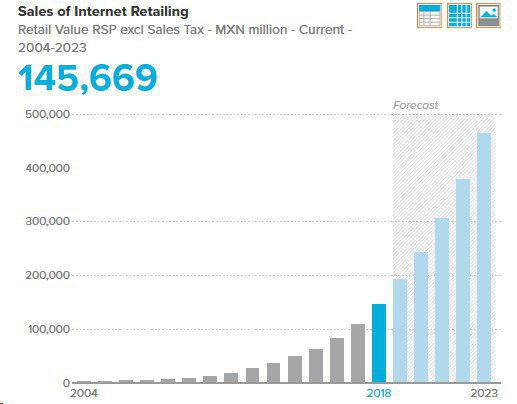 “Retailing players have focused on specific needs such as time saving and delivery service of larger items. Online pure retailers such as Mercado Libre and Amazon are some of the leading players, however there are also other important traditional retailers with online stores that are very important players such as Walmart and Liverpool.

Foodservice is growing mainly due to the increasing presence of online delivery service companies in more cities in the country.”

He also explained that the leaders in internet retailing include big players such as MercadoLibre, Amazon, Walmart, Liverpool, Privalia and Linio. However, many other players are launching or strengthening their online operations. For some non-native online stores, online sales represent a small share of total sales. 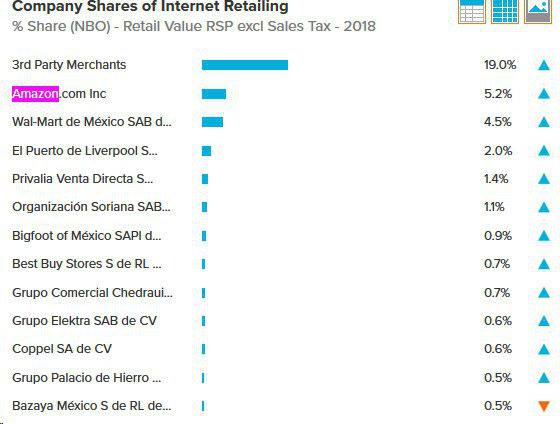 They recognize the strategic relevance of having a presence in the channel and reaching consumers who might eventually become regular customers; this is why companies are making efforts to improve their omnichannel approach, including Elektra, Coppel, Sanborns, Superama, and Costco.

Do not forget, Amazon announced that it is planning to open dozens of brick and mortar grocery stores.

The company’s move to open brick and mortar stores, once shunned, reflects a new trend: the merging of online and offline retailing, as has been evidenced by recent reports by Walmart and Best Buy. Amazon successfully managed to weather competition from Walmart by using physical stores as warehouses for expedient shipping or pick places for local shoppers.

Apparently, Amazon’s strategy of store openings is a way of riding this trend, and continue its growth momentum. Thus, the cheer for its stock on Wall Street.

According to Amazon, Home, Fashion, Toys, Beauty, and Amazon Devices were the top-selling categories during the record Thanksgiving shopping weekend.

Cyber Monday 2022 spending could hit an all-time high as analysts believe severe inflation may count for little to nothing.

While there is no direct reason why Amazon is shutting down its distribution business in India, evidence points to the growing competition in the country’s e-commerce sector may be squeezing out the retail giant.