Fresh off the launch of their pre-game Reign of Terror (RoT), a real-time tactical game taking place in a mixed reality cyberpunk metaverse, has announced its NFT Genesis Drop to give players early access to extended reality gaming. For the first time, fans of 3D gaming can obtain NFTs that can be used across the Reign of Terror mixed reality metaverse, in the virtual reality game and real life immersion, by entering the Whitelist event.

In the RoT NFT game, NFTs are at the center of action-packed PvP and PvE missions in which players team up in squads and plunder the wealth of other gangs, and also key to upgrading in the game by developing resource-rich land. Each NFT from the Genesis series can be used in the RoT Meta Pre-Game for staking quests that can net the holder special items to use in the fast-approaching full launch of the Reign of Terror game in Q2 2022.

What Is the NFT Genesis Drop?

The NFT Genesis drop comprises high quality 2D generative NFTs to be released in four different rarities. In RoT, each player starts off purchasing NFT heroes and fusing them together to level up to perform harder missions in this futuristic, dystopian world. 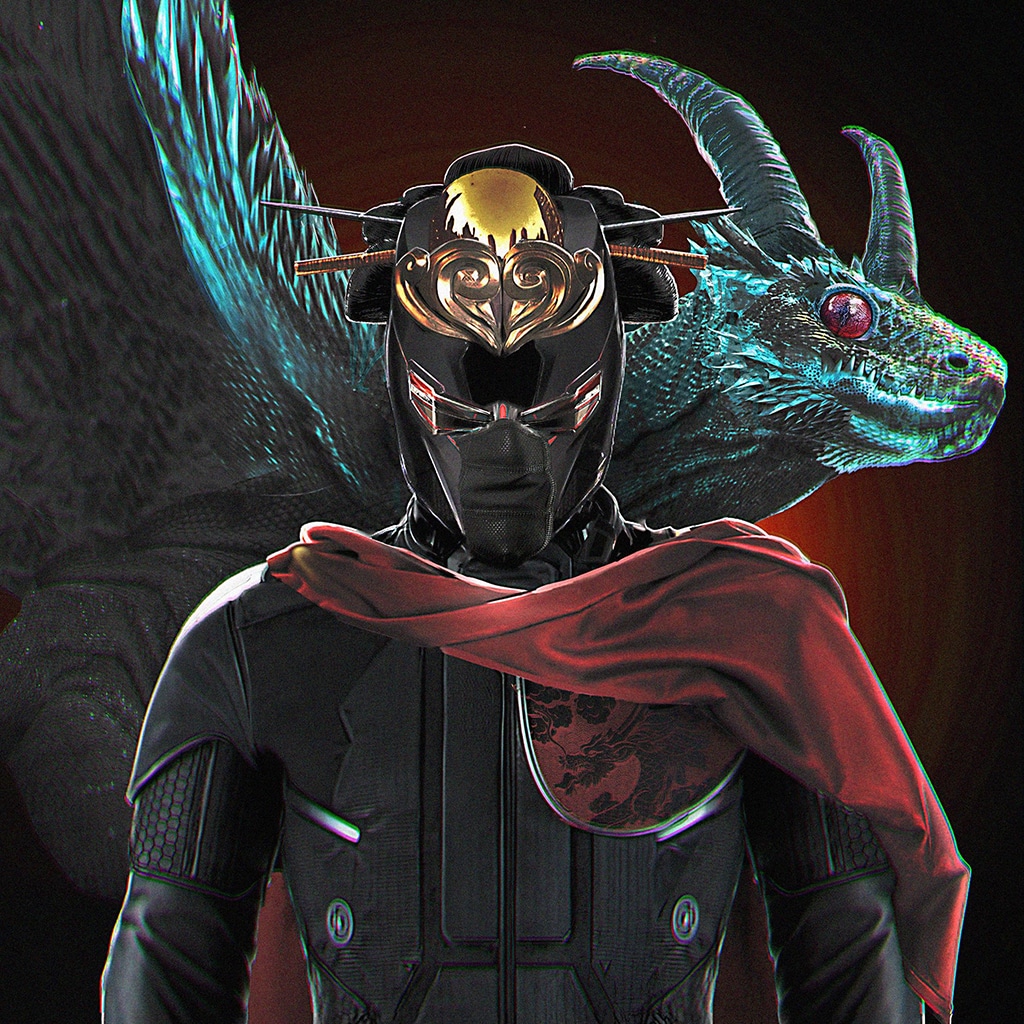 From Rare to Extremely Rare NFTs 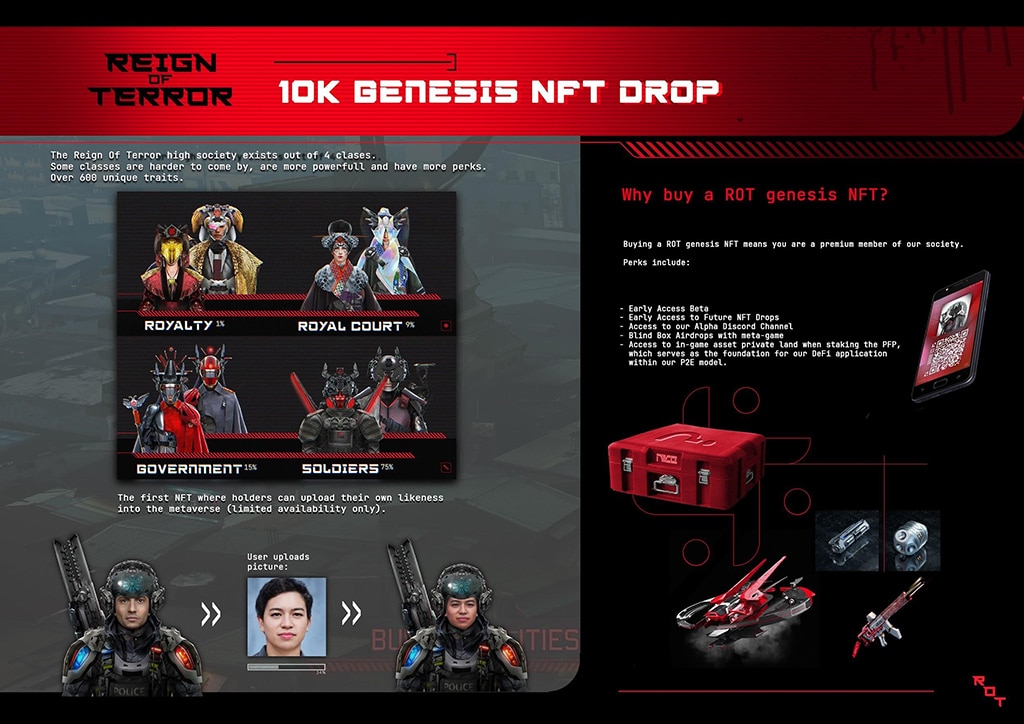 Similar to the popular Bored Ape Yacht Club (BAYC) or CryptoPunks, the Reign of Terror Genesis NFTs are Profile Picture (PFP) NFTs.  A limited number of players will have the special ability to upload their own picture to their PFP avatar.  RoT Avatars with the user’s likeness could have additional value and utility in-game, in the NFT market, and in social media channels.

With 600 traits, the high number of unique traits of RoT avatars ensures originality and increases the potential to obtain more valuable rare NFTs.

In the Reign of Terror Genesis Drop, the NFT not only represents a unique cyberpunk avatar, but also a virtual land in the RoT world. Premium members of the RoT society also gain:

[RoT Quote “Leveraging their experience with the world’s largest gaming publishers, the talented game designers at RoT sought to develop mixed reality, face swap function and other leading-edge technology to create an entirely new way to interact in the rapidly developing world of NFT gaming in 3D metaverses. With features like placing your real face on your PFP avatar in a metaverse where VR gaming immerses with daily interactions, we have only started to tap the potential of mixed reality.” ]

As a special bonus, each NFT holder has access to free land. In this terraced city, high and VIP tiers are the most valued for their fresher air, richer minerals and proximity to the power at the top of the tower – than the free barren wasteland on the surface. All players have the possibility to build up wealth through the land resources, and other NFTs. 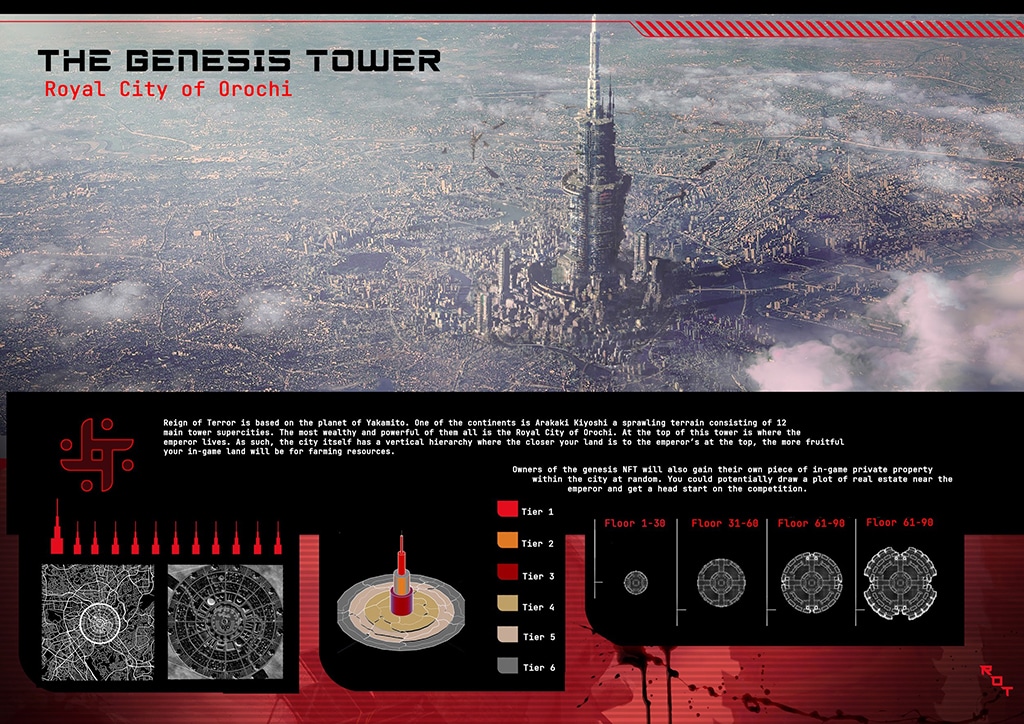 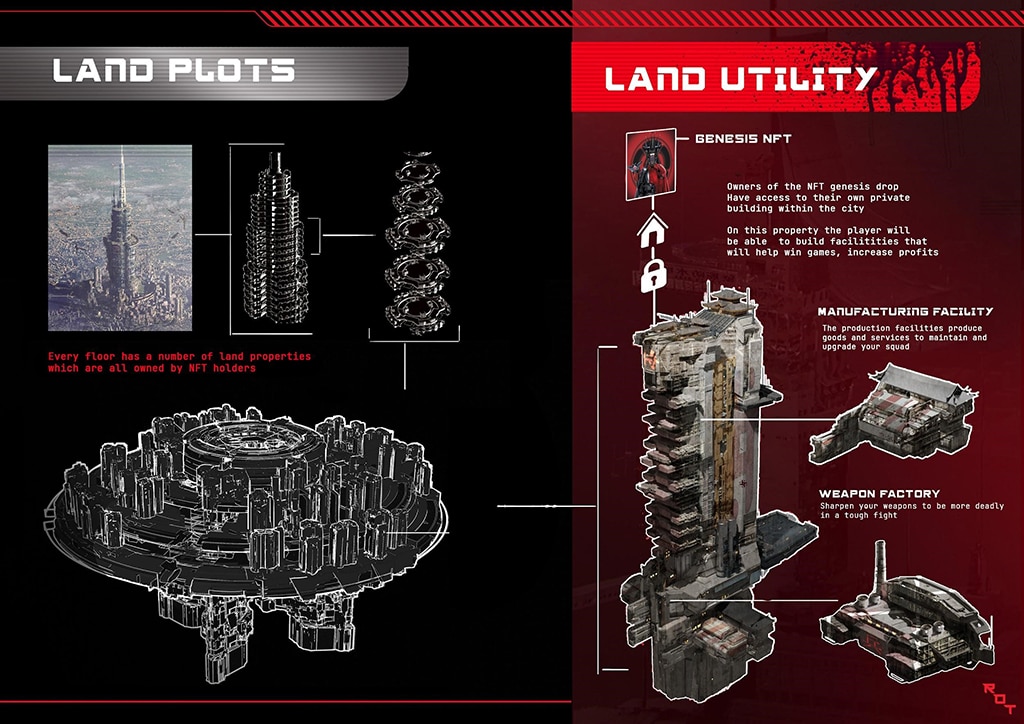 Land equals power across multiple systems in the Reign of Terror metaverse. Landowners can harvest resources to craft weapons and other defences, and build facilities to help them win the game.  The land also influences the power guild or alliance, and the DAO governance system.

Other Upcoming NFT Drops – Get Weapons, Land, and More

This lead-off NFT Genesis Drop is part of a series of upcoming airdrops providing players with valuable NFTs that can be immediately deployed in the game. In future NFT drops, players can obtain weapons, land, heroes, blueprints, vehicles, and building systems to use in all facets of the game to fulfill P2E missions, while also earning from the DeFi mechanisms.

The NFT whitelist campaign provides all community members a fair chance of securing an opportunity to get NFTs as part of the NFT Genesis Drop launch. Those who are active in the community will have a chance to get free NFTs.

For more information about the Whitelist Campaign, please join our Discord and follow the announcement channel.

About Reign of Terror

Reign of Terror is a P2E blockchain game in a cyberpunk metaverse that immerses players in a dystopian, futuristic world while weaving in graspable decentralized finance mechanisms. Get lost playing in a jaw-dropping new reality game where missions become investment-bearing activities!