Robinhood, the brokerage startup based in California, has announced integrations with four companies, Quantopian, Rubicoin, StockTwits and Openfolio. The users of these platforms will now be able to connect their accounts with trading platform and trade securities without switching into Robinhood app.

Powered by Robinhood platform, StockTwits could turn from an app for tracking and acquiring stocks to your main finance app. “With the Robinhood integration, true social trading is now a reality on StockTwits. The StockTwits community can now easily trade from their watchlist and share those trades with a few swipes,” StockTwits stated.

With the partnership, finance company Quantopian will let customers to buy and sell securities without paying a commission. Moreover, it doesn’t include a minimum balance requirement. Earlier, Quantopian teamed up with Interactive Brokers which charged users a commission and demanded the maintenance of an account balance.

“This integration makes it possible for anyone to trade algorithmically for free. Algorithmic trading used to be reserved for big companies with expensive tools and exclusive access to cheap trades. Quantopian and Robinhood make the process free, from data to platform to execution,” the firm said.

Quantopian enables its users to develop their own investments algorithms and put them into a fund. Meantime, the makers of trading algorithms get a share of the revenues. 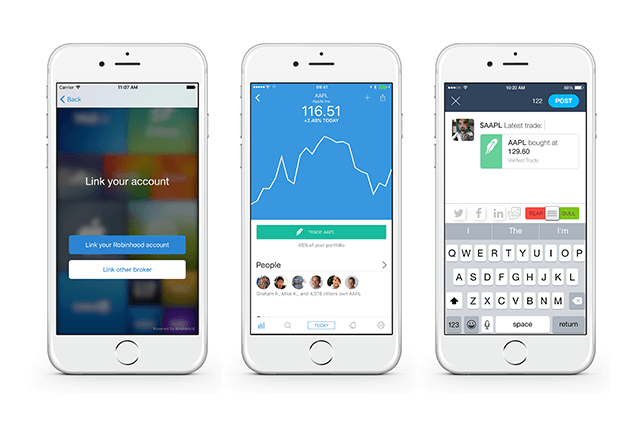 Openfolio commented: “This integration allows our customers to compare their portfolios and benchmark their performance against the Openfolio community, the markets, and their peers. Openfolio investors can trade – for free – via the Robinhood platform with all trading activity automatically synced between the platforms.”

The integration with Rubicoin is expected to be completed in mid-December. “This integration allows investors to quickly and easily sign-in or sign-up for a Robinhood account right from the Rubicoin app, and immediately start investing,” the company said.

The Robinhood platform is now available only for iOS and Android devices, what limits mobile apps trading features. Meanwhile, integrations with other companies allows to broaden its front-end platforms and attract new traders.

After launching the third-party integration, company joined a list of brokerage companies that have commissioned API versions for developers. Among such companies is a platform called Tradier, which is based on a brokerage API matching interactive brokers. The firm has recently launched an API version of its Tradable Embed platform for connecting developers and brokers.