It seems that Samsung range of smartphones might be the first of many to hit the market in the years to come owing, among other things, to blockchain and crypto adoption by the company.

For some time, competition between tech giants has been predominantly focused on smartphone specifications and improving features such as camera specs, screen size, and resolutions. However, Korean technology giants Samsung, the creators of the Galaxy smartphone range could potentially become one of the most significant driving forces behind crypto and blockchain adoption on a mass scale. The power of crypto and blockchain technology is now accessible and available to more extensive consumers thanks to their smartphones, putting the power in the hands of the people, literally.

Over the years, the Android market has boomed and takes up about 60% of the global market. The graph below indicated that between the years of 2013 to 2019, the quarterly market share held by Android smartphones has been significantly more significant than that held by their biggest competitor iOS. The innovation of technology in Android phones, like Samsung’s newest range of Galaxy phones, indicates a quiet but evident shift in the direction of new blockchain smartphone features. 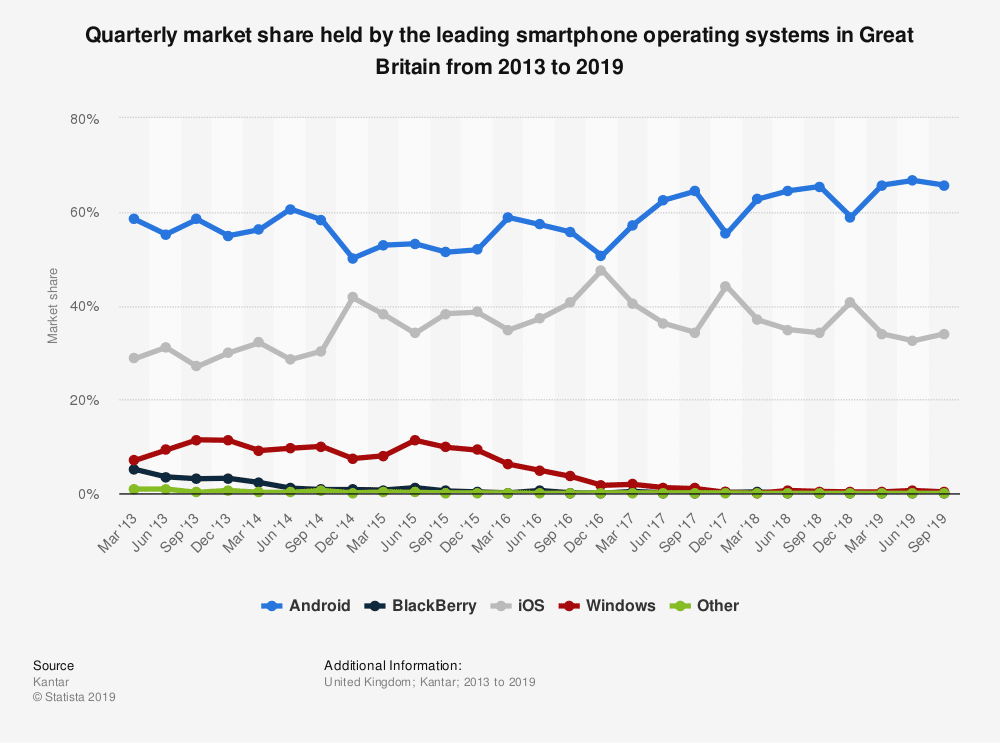 Samsung unveiled its latest 5G enabled Galaxy range of smartphone compromising of the S20, S20+, and S20 Ultra. The new smartphones have been built on the older S10 ranges which means Bitcoin, blockchain, and cryptocurrency are supported on the system which hosts a built-in bitcoin and crypto wallet.

It is thought that Samsung has created a processor that is dedicated to protecting the user’s PIN, pattern, password, and Blockchain Private Key with a combination of their security Knox platform. This ensures that security on their new S20 range is secure.

One of the most critical issues that is overlooked is the control over a private wallet key and in most cases is the reason why most crypto thefts and hacks happen, because users fail to store their tokens in the wallets they have private keys for. This then means that if bitcoin or crypto are stored on smartphone wallets, it gives users control over their private keys and removes the control and reliance on external companies.

The adoption of crypto has fallen short in recent years concerning its expectations. However, user experience developments have helped innovate technology to make using crypto more accessible. This slight move and adoption of crypto-friendly software on widely used devices could help drive the crypto industry.

As technology slowly makes using crypto easier, we will see many adoption developments happen over time. For example, Starbucks, a US coffee chain, will be the first launch partner of Bakkt, who plans to launch a customer app for crypto purchases this year.

New dApp developments by Samsung also show promise in the area of growth towards crypto. Their wallets can support four decentralized apps. These include CoinDuck, Cosmee, CryptoKitties, and Enjin. The dApps can only be used on galaxy range phones that support them from the Samsung Galaxy Store.

When looking at the broader picture, Samsung has always strived to offer its users new features and devices like the Z Flip with great features like is folding glass screen, which typically revolutionizes the mobile and technology industry. These new ideas, paired with new financial ways of working like crypto, mean that new concepts will become increasingly accessible and easy for consumers to use on a mass scale. Their limitations are taken away from them, and they then become fully functioning services.

By slowly integrating these new concepts into their devices along with software to support them, Samsung is inevitably increasing their knowledge in crypto and blockchain technology and is simultaneously expanding their reach of customers.

More crypto investors will be interested in purchasing Samsung mobile phones because now with high specification phones comes the ability to have excellent camera quality and all the other shiny gimmicks as well as a crypto wallet.

Yasmita Kumar is a writer and has been writing about various topics over many years now. She enjoys writing about my hobbies which include technology and its impact on our everyday life. Professionally she writes about Technology, Health, and Fashion and previously worked for the NHS.

Bitcoin-based ETF may see the light of the day under the new Biden’s administration with Elad Roisman who will be the head of the SEC.

Today, the most reliable options are hybrid services like BitcoLoan, which provide users’ finances with a reliable platform to work with.

Bitcoin, along with other crypto assets, is said to have the best possible tax treatment for long-term investors.

Not just an app but a friend in all your adventures