A federal grand jury decided on December 11, 2019, that Anthony Francis Faulk, a 23-year-old hacker is guilty of extortion and wire fraud.

A group of hackers used sim swapping to steal BTC. He and his anonymous friends used sim swapping technology since 2016 to target cryptocurrency users. Anthony Faulk got access to the funds of numerous victims, using sim-related credentials. Many of the cryptocurrency teachers travel around the U.S. It is easy for someone with a bad attitude to find out the telephone number of some crypto celebrities.

Then, hackers create a copy of a sim-card and send the coins from associated accounts to exchanges. At the end of it, scammers used cash to buy luxury upgrades: Nissan Rogue, Ferrari convertible, and a $942,500 apartment.

The man also bought a Rolex watch but the most interesting take from the tabs is music-related spending.

It appears that the hacker loved buying song rights, aka Royalties, via a special website Royalty Exchange. This looks like an extravagant way of laundering the stolen coins. Instead of sending them to Wasabi wallet, or exchanges without KYC, the hacker just invested in modern music. 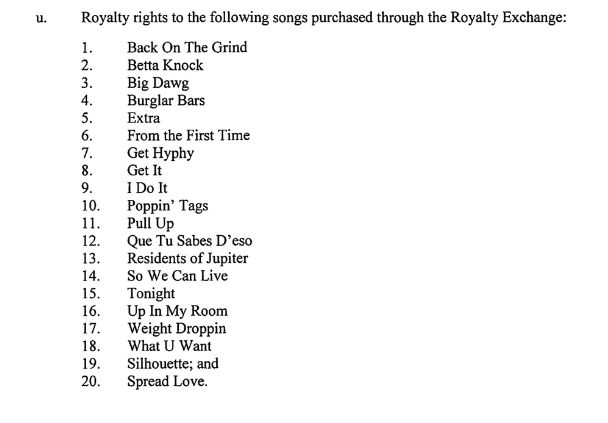 Looks like songs like “Back on the Grind”, “Pull Up” and “What You Know About That” can belong to several different music performers.

Motherboard sent a letter to Royalty Exchange to clear out the clouds. But the journalists did not receive the answer and the royalties seem to be still working. So because government agents seized control over his things, when you stream the songs, the federal agents may be getting some extra cash.

A quick lookup in the Royalty Exchange open database shows that Sim swapping BTC theft master was purchasing some song packs in one click. He bought Grammy-winning Ten Hip-Hop Singles bundle for $8,600, signed the transaction as Anthony F. Within the package there is one song that is not mentioned in the court documents: “What You Know About What” by T.I. At the same time, the documents feature a song by Pitbull called “Que Tu Sabes D’Eso”. When translated to English, it means “What You Know About What”. Music analysts say that the song by T.I. is much newer and can attract more of the royalty payments.

Besides Hip-Hop, Faulk was fond of Goldroom, purchasing the rights on several tracks for a 10 years term. Goldroom is an electronic music producer from Los Angeles. When the journalists decided to reach out to Goldroom himself, the man said he has no idea about the deals.

He said that there was a writer in the studio who owned partial rights on some of the tracks. He used websites for music trading and presumably “sold his publishing stake in those songs to Royalty Exchange”. Josh Legg, aka Goldroom is hoping that the rights will be distributed fairly among the righteous owners.

Legg admits that the music industry may soon receive an inflow of shady investments and bets from people who own cryptocurrency. And after that, institutional investments will consider putting the money into the music, which will become something like the stocks or cryptocurrencies.

The launch of the spot trading platform comes at a time when the market is experiencing a significant downturn.

In addition to Bitcoin futures trading, B3 will also launch Ethereum futures.