The Chainalysis report shows that a very small fraction of the total Bitcoin addresses are actually “economically relevant”.

On Wednesday, December 19, crypto-centric research firm Chainalysis released a report that only a 37% of Bitcoin addresses in its blockchain are “economically relevant”. The Chainalysis report shows that the Bitcoin blockchain network comprises a total of 460 million addresses, out of which only 172 million are relevant.

These 172 million BTC addresses are “controlled by people or services who currently own bitcoin”. Again out of this 172 million, relevant addresses, only 27 million actually hold Bitcoin. The report also states that 86% of the addresses belong to the named services like the crypto exchange and the darknet market.

While the Bitcoin blockchain contains over 460 million addresses, only about 37% are economically relevant. Read more in our latest research: https://t.co/2GsQz3Pxau pic.twitter.com/6KUDsPkdtJ

The report also notes that “just 20% of transaction value on the Bitcoin network is an economic transfer, moving bitcoin between two different parties”.

The Chainalysis report also shows the chart for the executed transactions in the period between August 2018 to October 2018. A total of $41 billion transactions were executed of which only 21.5 percent or $9 billion had real economic value. 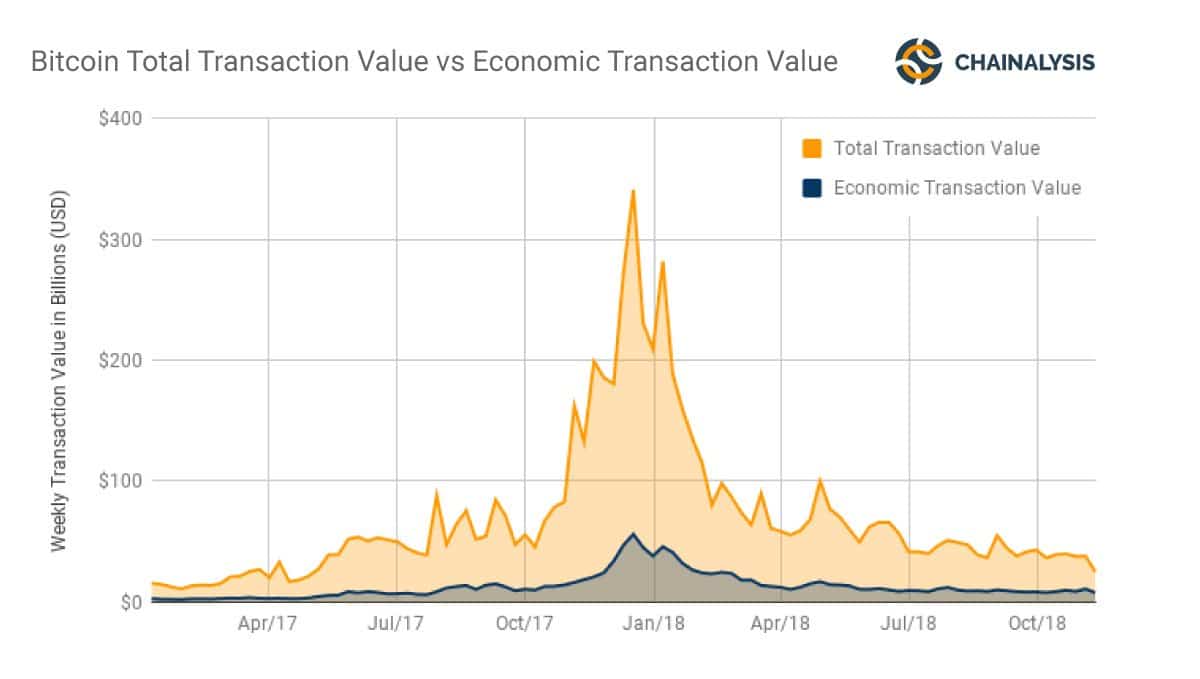 The report also goes to mention: “While publicly available metrics like number of addresses and transaction volume provide some information about the bitcoin network, they don’t go far enough to capture the complexity of a network in which only a fraction of accounts hold bitcoin and only a small proportion of transactions have economic value.”

It further adds: “By looking beyond top-line indicators and linking activity to specific addresses, we’re able to offer a more granular, in-depth look at bitcoin network activity. Our deep knowledge of cryptocurrency helps organizations understand the space and make more informed decisions about their own offerings. ”

Furthermore, citing the Chainalysis report, Bloomberg reported that just before the crypto market crash in the last month of November, the amount of BTC flowing into personal wallets was on a steep rise. By November 1, the total BTC flow amount was $400 million which was 33% up from just $300 million in June. This is indicative of the fact that people were stocking more BTC tokens at the lower prices.

Earlier this week, a report from Diar shows that institutional investors are moving towards the over-the-counter (OTC) physical Bitcoin markets offering higher liquidity. The report goes to mention that popular cryptocurrency exchange Coinbase saw a 20% jump in BTC trading volumes this year in 2018.

The Diar report states: “Coinbase which represents only a fraction of global markets sees over 30% more trading outside of traditional exchange hours. With no time stop on trading, institutions and big money would require access around the clock from fears of a rude awakening in a market that remains highly volatile, despite that decreasing to new lows this year”.

However, one report from the Blockchain Transparency Institute (BTI) released earlier this week shows that a majority of the crypto exchanges have been faking the transaction volumes data. Only two crypto exchanges – Binance and Bitfinex provided accurate information. The BIT report noted:

“Based on this data, over 80% of the CMC top 25 BTC pairs volume is wash traded. These exchanges continue to use these strategies as a business model to steal money from aspiring token projects”.

Matrixport wants $100 million in funding at a $1.5 billion valuation as the crypto space still reels from the FTX collapse.