With the attention and participation of many celebrities and famous enterprises, NFT has quickly won a lot of attention. It has not only become a hot topic both inside and outside the crypto world, but also the transaction scale of NFT is increasing day by day. According to the Cryptoart. io data, the total value of encrypted artworks is about $757,213,372.10 (total value is about 190,220.682 ETH), and $490 million, more than 208,785 works have been sold.

Obviously, from the end of 2020, the field of NFT has ushered in an unprecedented rapid growth, and the attention of NFT has been increasingly discussed in the community. Users of ZSC community also directly raised this issue, “will ZSC launch NFT projects in the future?”

Although the official staff of ZSC did not directly respond to this question, people familiar with the matter found out that Opengaga twitted on May 10 that it was considering launching on ZSC, and the official account of ZSC liked this tweet. 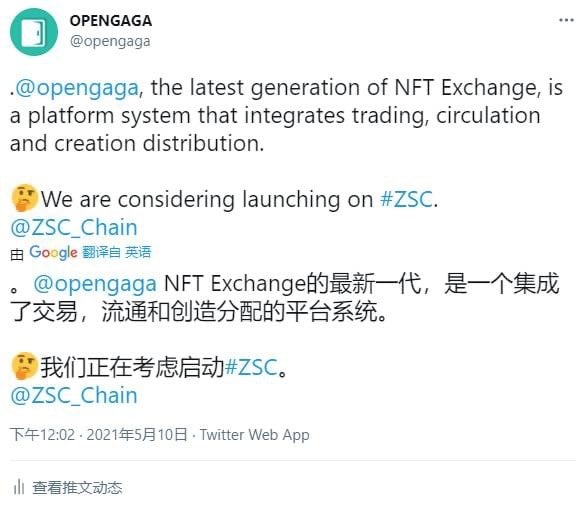 Subsequently, on May 13, opengaga has launched three consecutive tweets to gradually introduce the general situation of the platform, which also confirms the fact it is about to launch on ZSC. Although the specific time is not yet determined, it is certain that this probably will be the first NFT platform of ZSC. 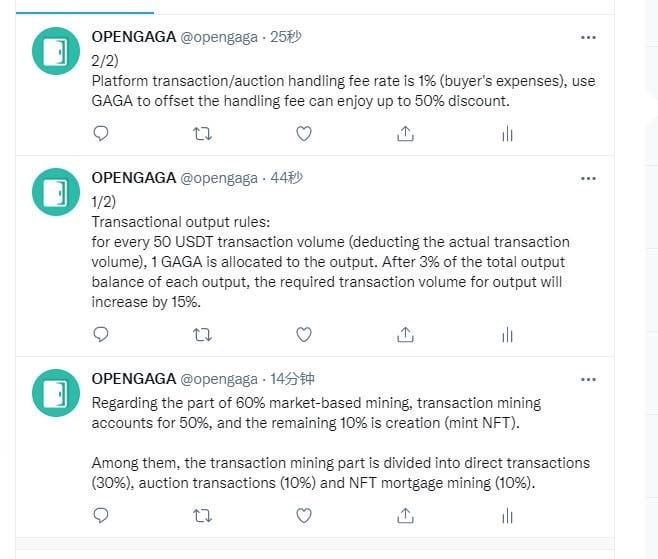 Opengaga is such a NFT platform based on blockchain, which can be used to collect, display and trade all kinds of digital collections. In addition, it can provide the best user experience of creation and trading. The platform has the characteristics of the lowest cost, the highest mobility and various forms of high-value collection token, which is suitable for a variety of fields, such as visual arts, music, games, sports, multi-verse and so on.  Users can create personal homepage quickly and efficiently through Opengaga platform, moreover, users can easily and conveniently realize the function of work display and transaction.

As the latest generation of NFT trading platform, Opengaga is a comprehensive platform system integrating trading, circulation, creation and distribution. For NFTs users who trade on the platform, Opengaga will charge a 1% commission (paid by the buyer). Meanwhile, users can use the platform token – GAGA to offset the transaction fees of Opengaga, and can get up to 50% discount.

In this tweet, Opengaga focuses on introducing the mining allocation mechanism of platform token. As described in Twitter: Market mining accounts for 60% of the total, which can be divided into two main categories:

At present, NFT market such as OpenSea has its own positioning and first mover advantages. As a newcomer, how can Opengaga break the situation?

However from the perspective of twitter, Opengaga keenly captures the accurate market demand and flexibly changes the distribution mechanism according to the market demand, and the ultimate goal of which is to create a more sustainable market.