In this guest post, you’ll find clarification of some of the most widespread delusions about security tokens shedding light on some of its actual characteristics.

Security tokens are being hailed as the next biggest trend in the blockchain and crypto space after the decline of utility tokens and rightly so, as these programmable digital securities offer a wide array of benefits like an increase in liquidity among real-world assets, cross-border trading and increased transparency in payment of distributions to mention a few.

While security tokens do bring some solutions to the table, it is not the panacea for all the problems with traditional securities or with utility tokens for that matter. As opposed to the propaganda being touted by many security token evangelists in the space.

Security Tokens and Tokenized Securities are the Same

Security tokens and tokenized securities are being so interchangeably used right now, especially online, that many believe both are the same but they’re not and encouraging such usage is stifling the growth of both.

Security tokens are a new product, they are crypto tokens that have been deemed as a security by regulatory authorities like the U.S. Securities and Exchange Commission, as they meet the criteria such as the Howey test.

In 1946, the supreme court handled a pivotal case, which laid down the foundation for the pathbreaking Howey test. In essence, the Howey test helps to determine whether a specific economic transaction is an investment contract or not and pertains the following criteria:

On top of these criteria, regulators also consider the flow of profits from the projects- ‘ are they in the control of investors?’- if a certain economic transaction meets these criteria then they are classified as a security.

Therefore any crypto token that meets these criteria (most do) is deemed as a ‘security’ and hence projects are subject to federal securities and regulations. If a project doesn’t comply with these regulations they can be penalized.

For example, Airfox is a company that aimed to revolutionize the mobile telecommunications industry and raised $15 million in the capital. The SEC slapped Airfox with a cease and desist order for not complying with regulatory norms.

Tokenized securities, on the other hand, are traditional securities but in a newly digitized form. By definition, tokenization is the process of converting rights pertaining to a particular asset into a digital token on the blockchain. And tokenized securities

Traditionally, real-world assets like stocks, real estate and gold have been traded using documents which makes the entire process cumbersome and quite complex, thanks to heavy regulation. Commodity exchanges have helped streamline the process by replacing physical paper with electronic transactions and standardized agreements. This is where blockchain comes into play as it promotes democratized ownership of real-world asset classes.

To draw an analogy from the evolution of the internet, tokenized securities are similar to how all magazines and newspapers shifted from an offline print medium to an online one. It’s the same substance but in a new form or rather a new distribution channel. The shift from physical paper to the internet was a pivotal change for media companies as it brought in unprecedented growth.

Security tokens are being touted as this infallible new tool but that is hardly the case, it’s perfectly possible for a securitized project to simply fail as it lacks a feasible business model, even though the project itself is compliant with regulatory norms.

Compliance doesn’t assure success. On the contrary, a thriving security token environment would require a whole host of reliable infrastructure from issuance to trading platforms, which is not fully established yet. 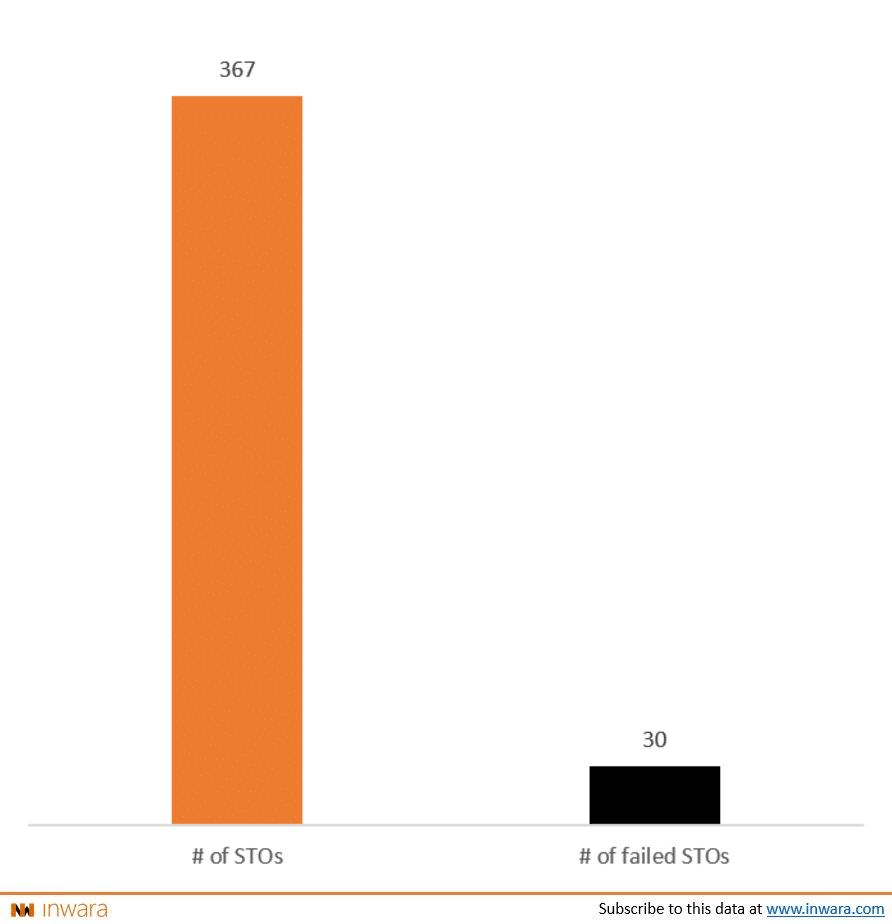 inwara.comSecurity token offerings are not immune to failure, as it becomes clear with approximately 8% of all STOs failing. Initial Coin Offerings, on the other hand, have a significantly higher chance of failing, 14.35% to be precise, which may be attributed to the lack of clear regulatory norms in the industry.

Crypto-enthusiasts have been arguing that it is the lack of regulations that led to the success of cryptocurrencies and the Initial Coin Offering model of fundraising.

While it is true, to a certain degree, that the lack of regulation did attract many entrepreneurs to the space, it also attracted many fraudulent players which led to investors losing as much a $100 million in ICO exit scams. This has led investors to be wary of projects in the crypto space which inadvertently added to the bearish market trends that have been plaguing the crypto space.

On the other hand, token offerings which are compliant with regulatory norms could open the floodgates to mass adoption of blockchain technology. How?

This is because regulatory compliance encourages established companies to dip their toes into crypto space and this inadvertently boosts trust in the public eye. On top of this, institutional money channeled into compliant crypto projects could go a long way in providing the support these projects need to reach a truly global scale, maybe even on par with the likes of Facebook or Amazon.

Fractional Ownership Implies It is a Security

Many people find it difficult to comprehend what a token is and what a ‘security’ is but as we mentioned earlier for an economic transaction to be a security, it needs to satisfy the regulatory criteria. Just because a real-world asset can be tokenized and owned on a fractional basis, it doesn’t mean its a security.

If you’ve heard anything about security tokens at all, it’s probably that it creates liquidity for real-world assets. But what is liquidity? Liquidity is defined as the quantitative discount the seller has to accept so as to liquidate their asset and is traditionally measured via liquidity risk, which is very high in private markets owing to limited demand or accessibility.

Even though this could reduce costs while enabling 24/7 peer-to-peer transactions, the potential has been stretched to vast proportions which grossly overestimates its capabilities, as the buyer market for these newly tokenized asset classes has not matured yet.

We have just begun to unlock the potential of security tokens and it’s underlying blockchain technology, hence it’s important that we tackle the misnomers head on and focus on its actual benefits.

Beyond the current use cases that encompass fan engagement, the ALPINE token will also be used as a donation currency in the near future.

As a way to make its STO more accessible to investors all over the world, Blockstream said it plans to list the BMN token on Bitfinex Securities Ltd, a regulated new security token (STO) exchange.