After reaching a price level of $ 7340.59 after the opening, the Bitcoin market was able to reverse during the session as the bears took control.

Normally, this ongoing drop in prices, which comes only a month after a 42% expansion in a day, pushed the bulls to their limit. An eminent Twitter trader, Bitlord, said he had left the Bitcoin business due to the ongoing tumult in the market, denoting an indication of capitulation.

Over the past day, the Bitcoin bulls have finally been granted a reprieve, with the BTC going from a weekly minimum of $6,526 to $7,378.13, which represents a massive increase of more than 10%. With this reprieve coming after nearly a week of relentless sales pressure, which pushed assets from $8,100 to $6,600 dramatically, buyers welcomed the decision.

Some have said that this sharp rebound in the key support area of $6,600 is a clear sign that the macro base is in place, which means that Bitcoin is ready to welcome an additional $10,000 or even new highs all time.

The decline in Bitcoin prices (BTC) is due to geopolitical and financial factors, suggested a senior portfolio manager.

In a tweet on November 25, Gabor Gurbacs, director of digital assets at investment management giant VanEck, highlighted several causes that “could” force Bitcoin to reach a minimum of $6,500.

His findings are in line with the general opinion on the price of bitcoin, which found about 11% increase on Monday, to $7,400.

However, one analyst pointed out that it was too early to be optimistic about Bitcoin, citing a convergence of bearish factors that might suggest that the cryptography market would be more painful. Even so, there are still analysts who keep their heads up. Velvet is one of those experts who called the ongoing drop from $8,000 to $6,000 half a month before this drop. Regardless of his bearish inclination, he has tilted upward, perceiving that the cards are starting to play for Bitcoin bulls.

To put it all the more just, the ongoing fall of Bitcoin doesn’t nullify a value model that could precisely foresee the development of digital money prices for the greater part of its history. 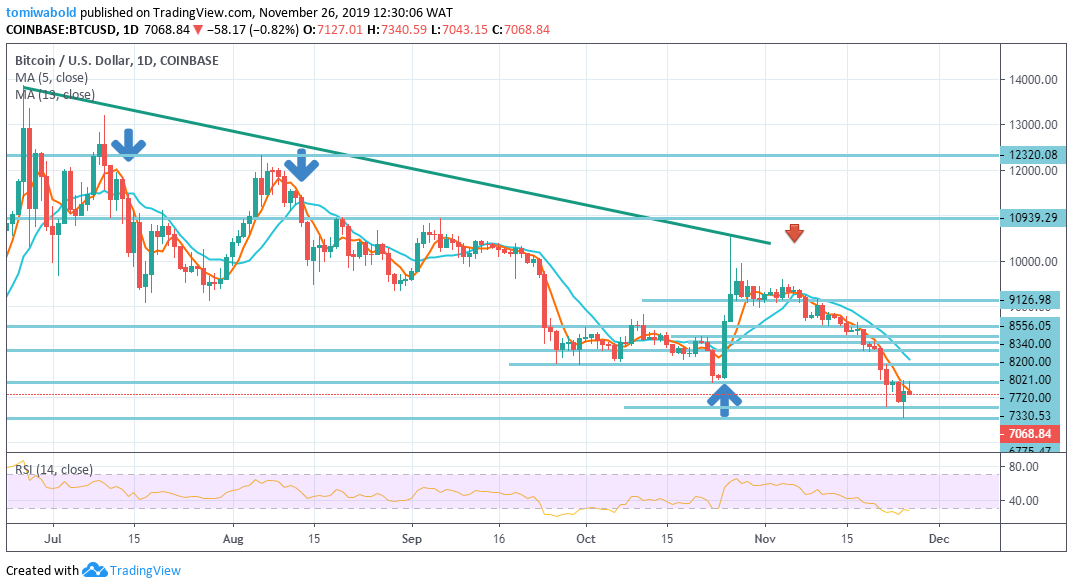 After reaching a price level of $ 7340.59 after the opening, the market was able to reverse during the session as the bears took control and could end the day around its opening price.

BTCUSD had closed below this level yesterday after rising to the level of 7386.06 earlier in the previous day. Failure to close over the resistance today can increase the importance of the future.

The cryptocurrency pair still met sellers today around the level at 7340.59 for the fourth consecutive trading day after finding sellers at 7378.13 in the previous session and at 7344.00 two days ago. The previous support zone on the 7330.53 level turned resistance has now increased as a significant level and below here bears remain, displaying an intact downtrend in the short, medium and long term.