Governor Lael Brainard in his speech yesterday, August 13, has updated the state and status of the digital currencies in the U.S.

The news has impacted the crypto market rapidly, Bitcoin closed at $11 839 and reached the dynamic and static resistances. Though it might look bearish in the short-term, the impulse was strong and the price is above the important support and resistance level at $11 650, if it breaks below however, the price may continue the correction and drop towards $11 450 – $11 440 levels. 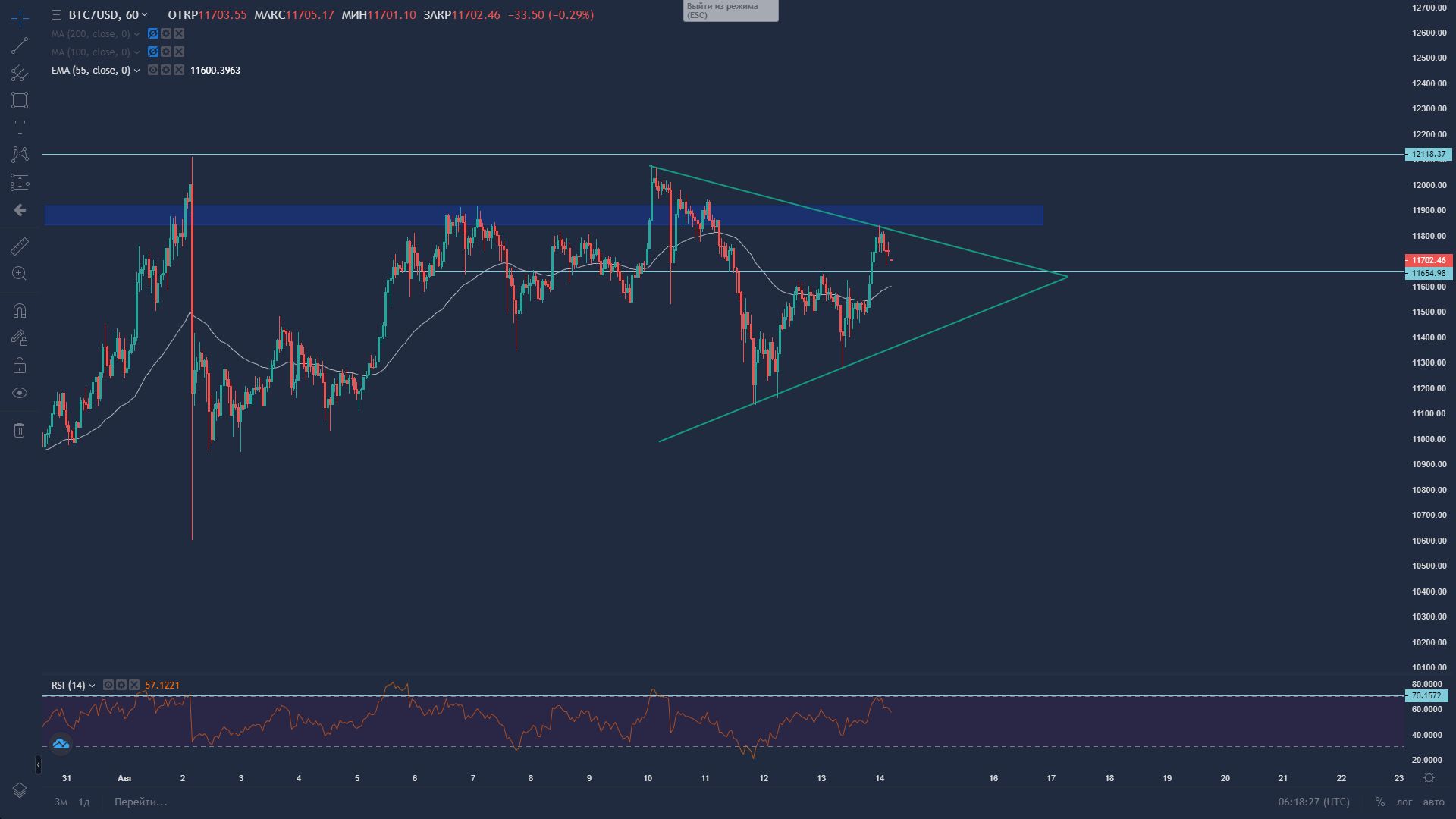 Ethereum continues the climb amid Ethereum 2.0 update, which implies a switchover of the network from PoW to PoS. Ethereum was recently correlated to Silver, whereas Bitcoin to Gold when the dollar weakening continued. Although despite the correction the major uptrend started in late July when Ethereum devs launched the Eth 2.0 testnet. The daily chart indicates the continuation of the uptrend, a major resistance up ahead would be $474 – $475, a breakout from the bullish flag was also backed by the FED report on Digital Currencies. 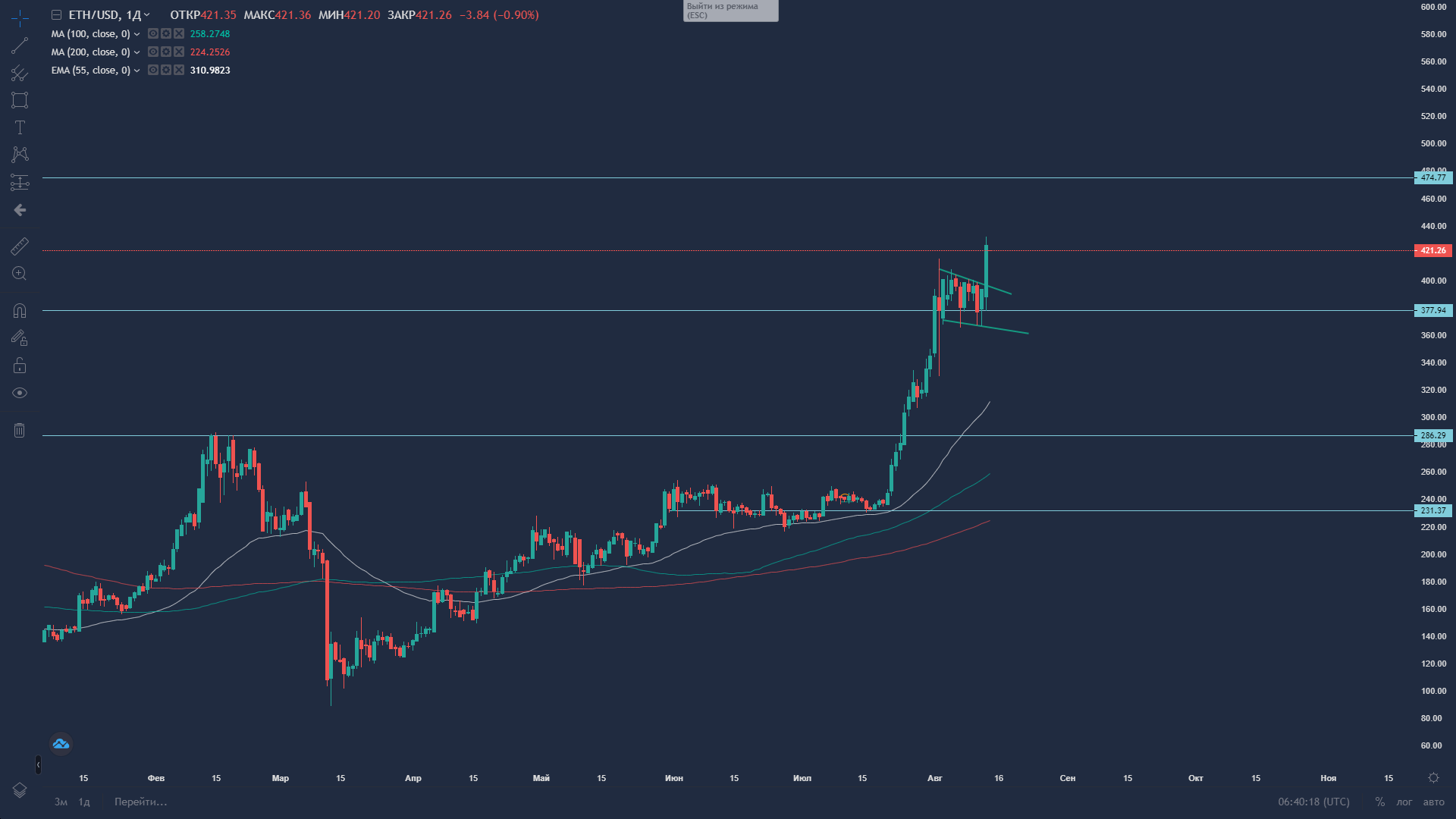 An hourly chart projects a correction which is still above the previous high of $415, and still looks bullish, however if the price breaks down the $415, the correction might continue towards $408 – $407.50 and touch the Fibo 0.5 level of the last impulse. 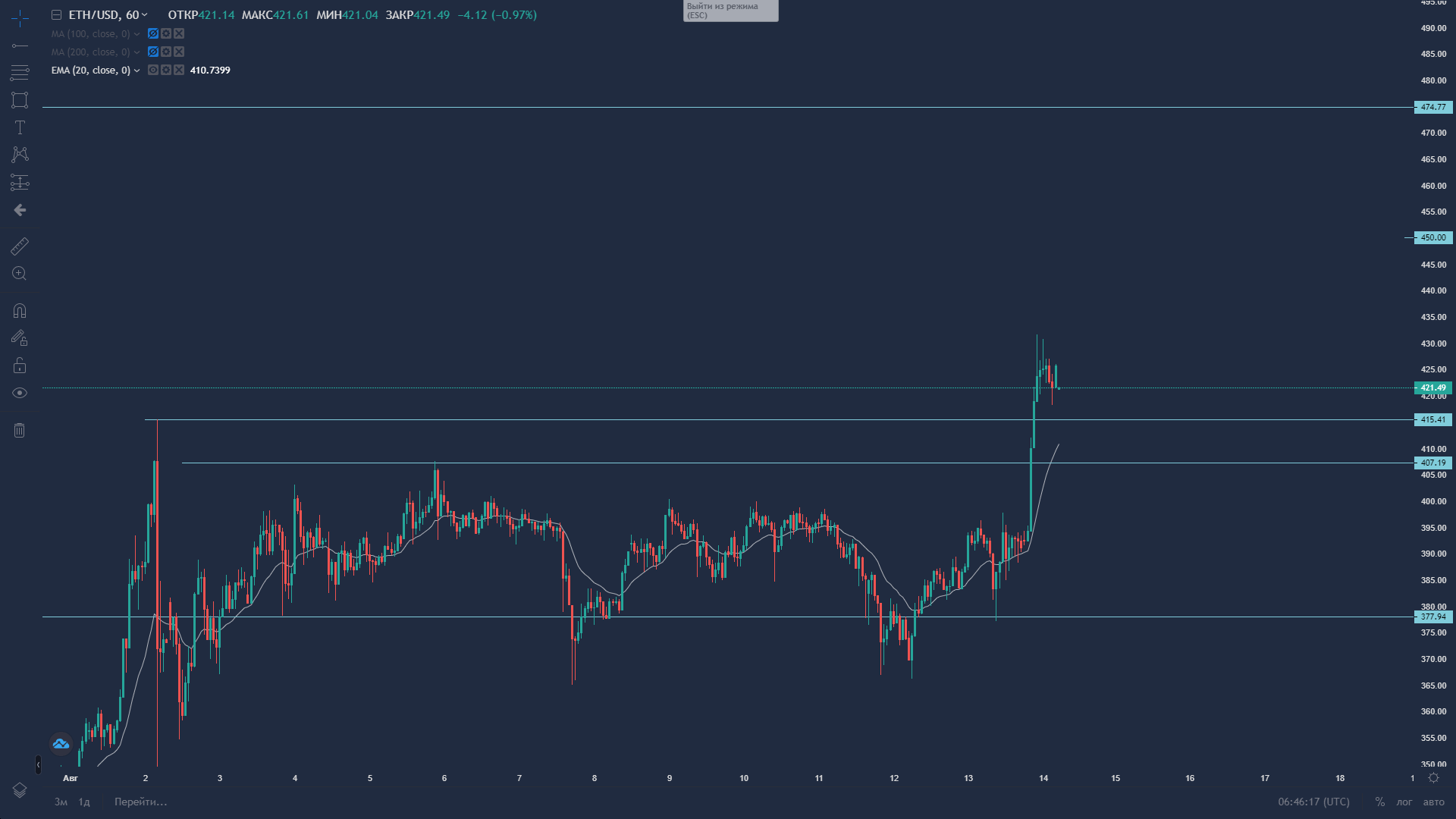 This week will be decisive for the determination of the trend for cold, not only we are expecting a large extraction of data from the US but the important US-China trade deal “Phase 1” talks. China already released their Industrial Production (July) data today, which was at the same level as for June and 0.3% lower than the expected 5.1%, the industrial production year-to-date in other hands shows a significant improvement -0.4% related to the previous released -1.3%. The US Core retail sales in other hands is expected to be 1.9% in July, 5.6% lower than the announced 5.9% for the last month. Weaker dollar will boost Gold price, and as the chart shows below, the trade deal is far from being completed, so another round of negotiations between US and China is inevitable, as core US manufacturers, like Apple may loose one of their largest consumer markets due to bans (WeChat and TikTok). 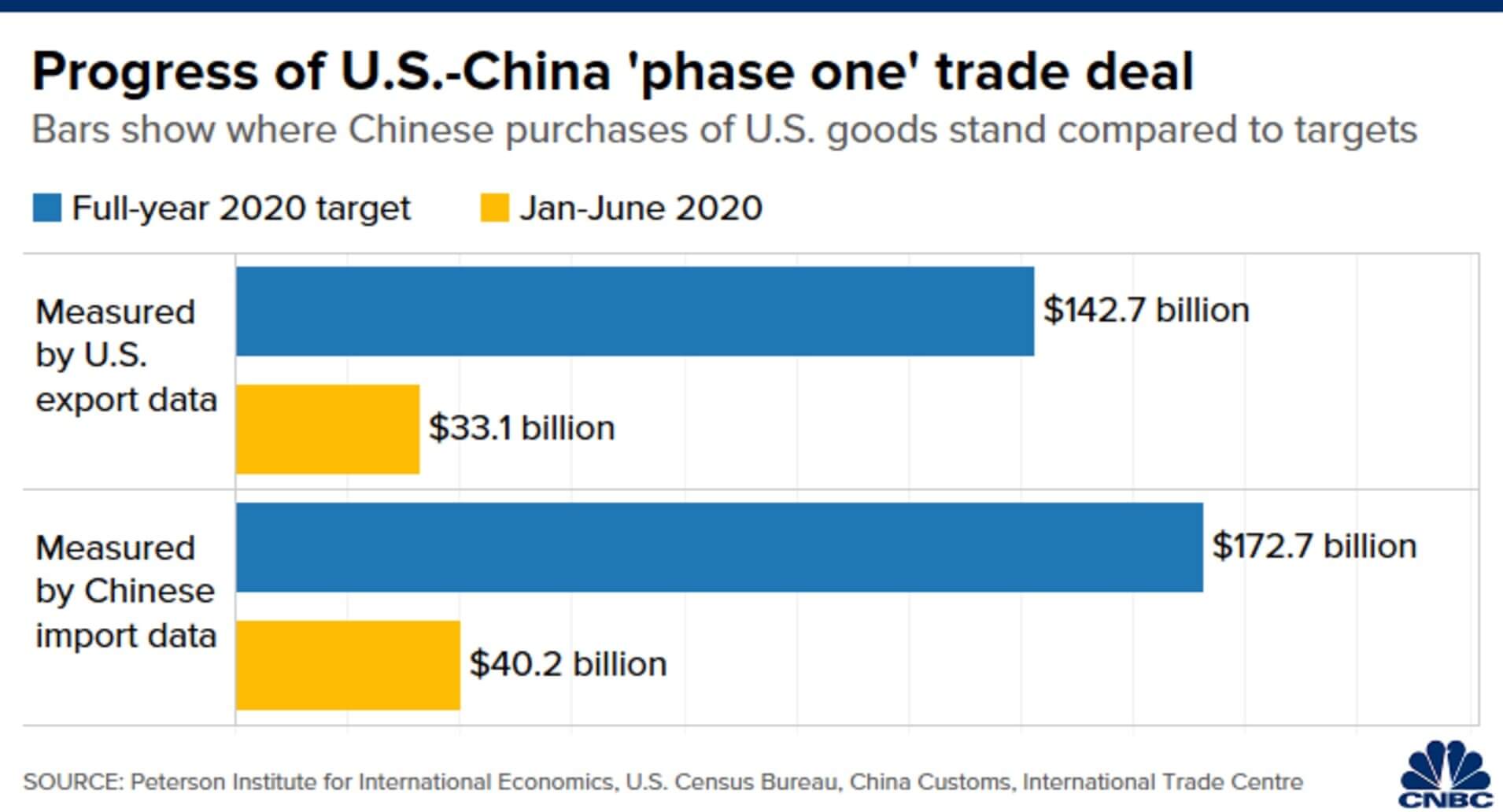 From the technical point of view, Gold has touched a daily EMA55 and rebounded quickly at $1864.33. 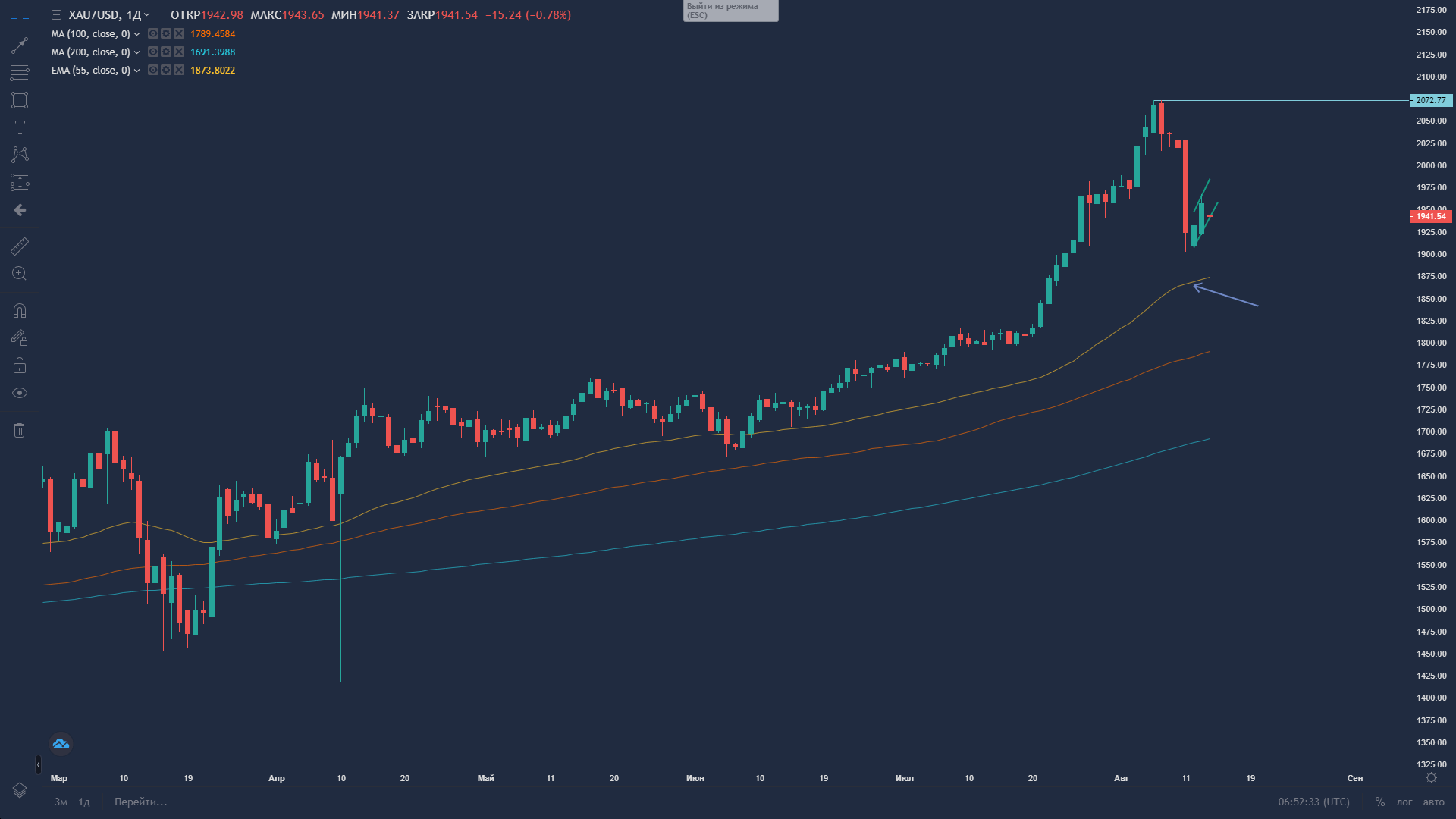 An hourly chart indicates a continuation of the bearish move if the price breaks below the lower edge of the flag. 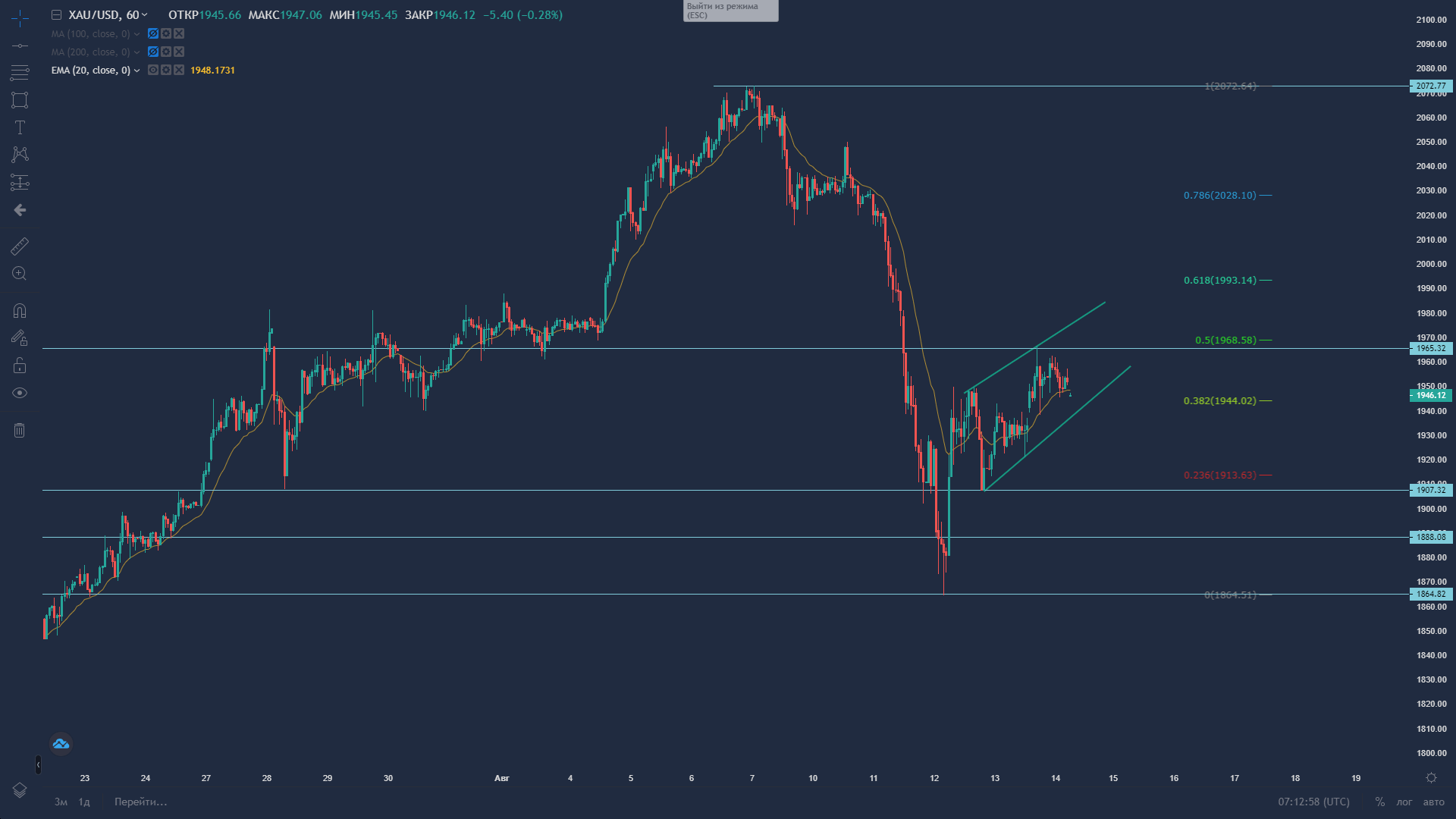 If the breakdown is confirmed there are three support levels to watch – $1907, $1888 and $1870. If the price rebounds with an impulse from $1870, Gold might proceed with formation of the Harmonic Bat pattern. 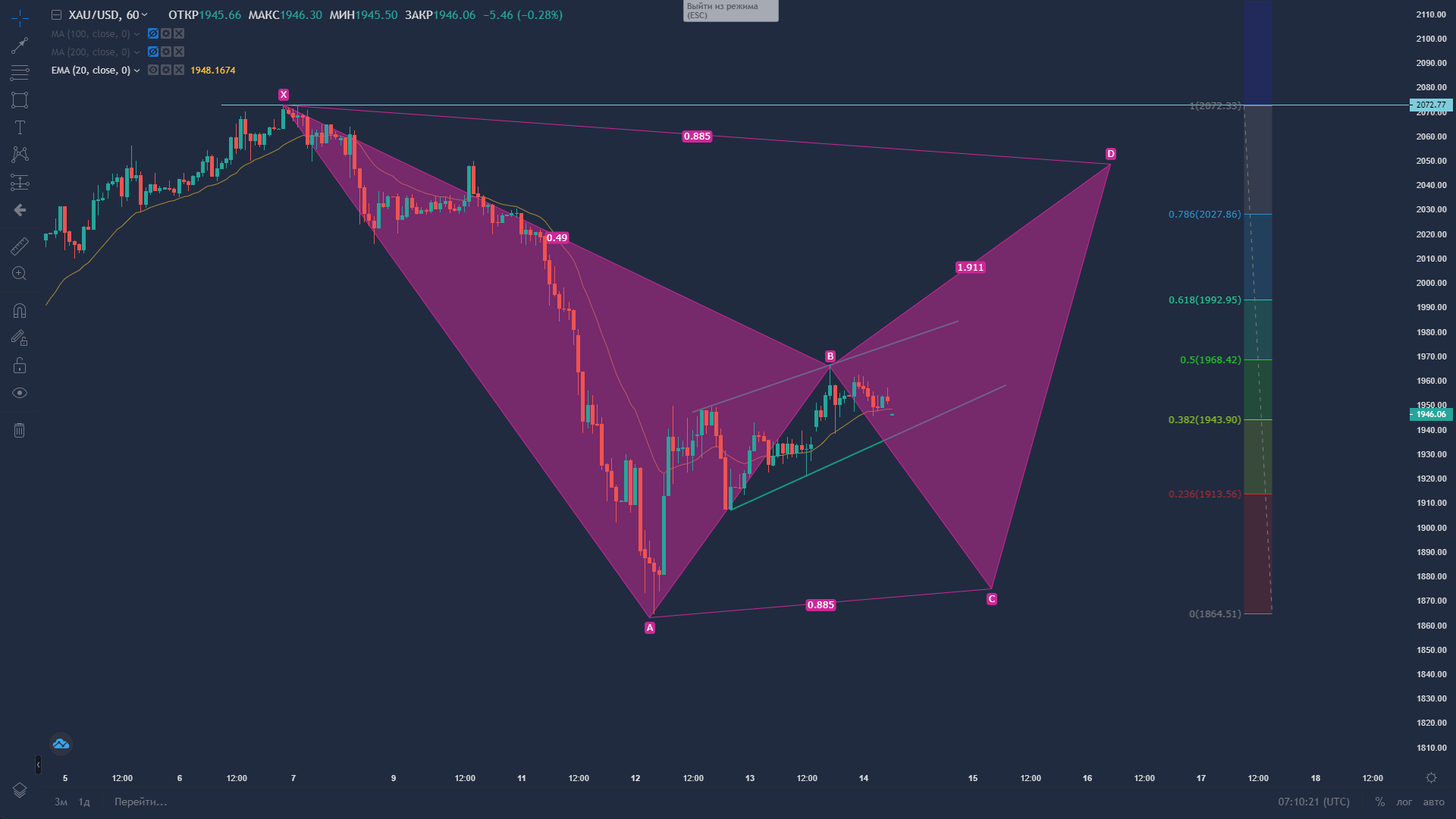 FED reports on researches over digital currencies might sound like another game for correlating the Bitcoin to major US Indices as it was since this February until July, since Bitcoin is not a regulated asset as Gold and cannot be a commodity for purchase and sale by Global National Banks and government authorities, Bitcoin is still more expensive than Gold and weaker Dollar means cheaper gold and cheaper Bitcoin, so bulls might take advantage no matter what the outcomes of the deal behold.