Cryptocurrency community is discussing recently leaked information from closed channels. What could the Rothschild’s IMMO be?

Cryptocurrencies is one of the most hotly debated topic among big businessmen and financiers. The major traditional economy players clearly realize competitive advantages and prospects over fiat money. You probably won’t be surprised if I tell you that the largest European banking dynasty, the Rothschilds, have taken interest in cryptocurrency.

“In February, it became known that the Tether accounts of Bitfinex were opened in the Dutch bank ING, owned by The Rothschild Group. At the same time, the profit indicators of this bank have grown significantly. On February 26th, the Fintech company, Circle, the main shareholder of which is Goldman Sachs (also The Rothschild Group), acquired Poloniex, a US-based crypto exchange”, – Zycrypto states.

It has recently come to light that not only Rothschilds dynasty invest in cryptocurrency, they are actively preparing several projects of their own. Private discussions have been sparked among large cryptocurrency investors following the leak which subsequently flowed into the open crypto community. One of the Rothschild’s projects name has emerged: IMMO. As Coindoo writes “… the implementation of IMMO is being monitored by Alexandre de Rothschild himself”.

It’s worth noting that Alexander de Rothschild is Mayer Amschel Rothschild’s 7th descendant (on the French side). Last week, on May 17th, 2018, he took over as head of Rothschild & Co.

Discussions on Bitcointalk and Reddit contain more questions about what IMMO really is than answers. Since official comments about the IMMO were never made by N M Rothschild & Sons, we can only guess as to what the entity really is. What if the Rothschilds are going to create their own cryptocurrency, what might that be?

IMMO is the worldwide stablecoin: For obvious reasons Rothschilds are not interested in risky highly-volatile assets. They have been preserving and multiplying their capital many times over for two hundred years. It would be logical to assume that the IMMO currency constitutes a stable asset which is not subject to rate fluctuations. It is likely that the cost of IMMO will be based on the price of gold or other limited natural resources. In order to maintain control over the market of cryptocurrency, they would have to come up with some sort of an influence lever. Such a lever can be a stablecoin, the issuer of which will be the Rothschilds.

IMMO – Immobilien: It can be assumed that IMMO (short for “Immobilien” (Deutsch) is somehow related to real estate.

IMMO – GovTech: IMMO will be legally recognized in one of the sovereign countries controlled by the Rothschilds.

Perhaps the whole thing is something entirely different. At this point we only have to guess.

Another interesting fact which may well be a mere coincidence. In 1988, The Economist, controlled by the Rothschilds, openly wrote about inventing a world currency by 2018:

“THIRTY years from now, Americans, Japanese, Europeans, and people in many other rich countries, and some relatively poor ones will probably be paying for their shopping with the same currency. Prices will be quoted not in dollars, yen or D-marks but in, let’s say, the phoenix. The phoenix will be favored by companies and shoppers because it will be more convenient than today’s national currencies, which by then will seem a quaint cause of much disruption to economic life in the last twentieth century.” 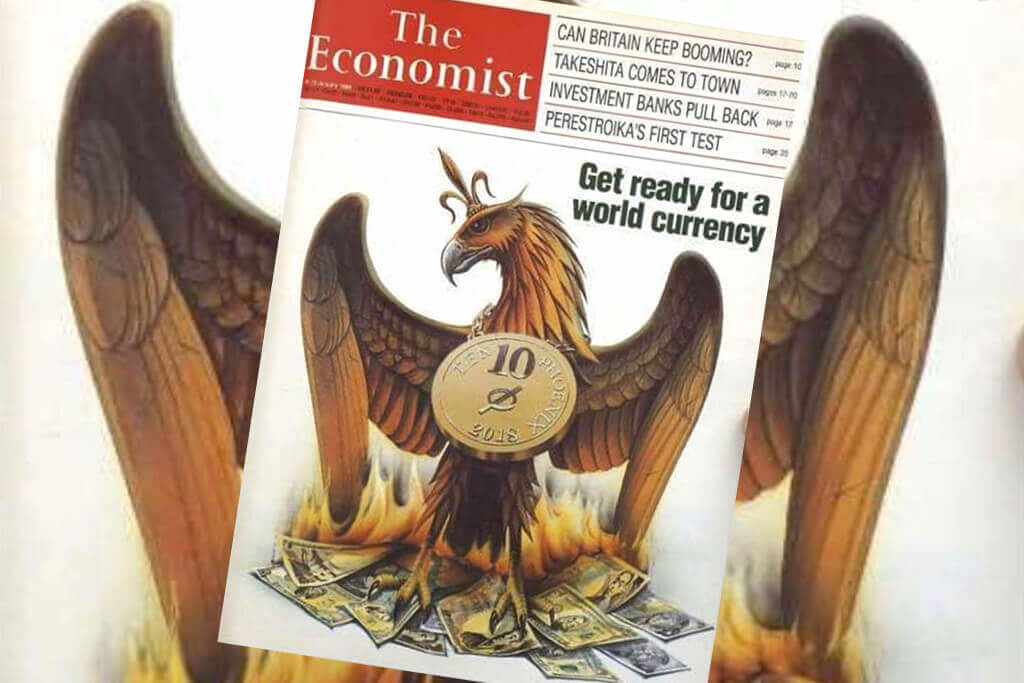 It is likely, we are among the first people to witness the appearance of the world currency rising from the ashes of fiat money. It remains unclear for how long the Rothschilds have been investing in cryptocurrencies and are engaged in IMMO creation, as they have successfully managed to hide their wealth from praying eyes for two centuries, as Mayer Amschel Rothschild bequeathed:

“… I categorically and unequivocally forbid any inventory of my inheritance, any judicial intervention and the disclosure of my state …”

It doesn’t go unnoticed that the metaphoric phoenix on the cover of the Rothschild magazine is now becoming a reality. Today, the question “What is IMMO?” remains open.

Rothschild has been acquiring shares in the Grayscale BTC trust since 2017.

Ethereum (ETH) for the first time in its history climbed above $2,500 on Thursday. This came in the wake of the network’s latest network upgrade – the Berlin hard fork.

Chesapeake Energy Corp announced that it had filed for bankruptcy citing growing debt and steeply dropping oil prices due to the rapid spread of the coronavirus pandemic.