It is expected that Ripple’s XRP, the top cryptocurrency by many adoption rankings, could gain two-thirds of its current price as we are getting closer to the beginning of 2021.

On February 16, XRP price did a move back to $0.26 per one coin. However, the token almost recovered to the $0.30 mark, yet then the price rolled back, reaching $0.29 at the time of writing. The community supports the coin more than ever. Some experts blow up Twitter follower’s hats off with crazy predictions. They say XRP price will be at least one dollar in 2020, by the beginning of 2021.

AngeloBTC says that he is a semi-retired crypto trader. Per his Twitter, Bitcoin, Ethereum, XTP, and Tezos are four cool cryptocurrencies worth attention. He expressed expectations about XRP reaching a price of $1, that’s the take profit level for the trader’s mind. He also states he would sell off all his BTC if it reaches $30,000. As per Ethereum, the trader expects the smart-contract backed cryptocurrency to gain at least $500. Then, he may consider selling Ethereum, and now the coin is moving up and almost there.

XRP Price in 2020 and Liquidity Is on the Rise

Another trader with 126,000 followers, named @cryptomocho, posted a pic with the graph showing that XRP looks very bullish now. The cryptocurrency recently made a jump to a peak of $0.30, and now trades around $0.29. The graph shows traders may prepare for the heat on the market in the next several hours. 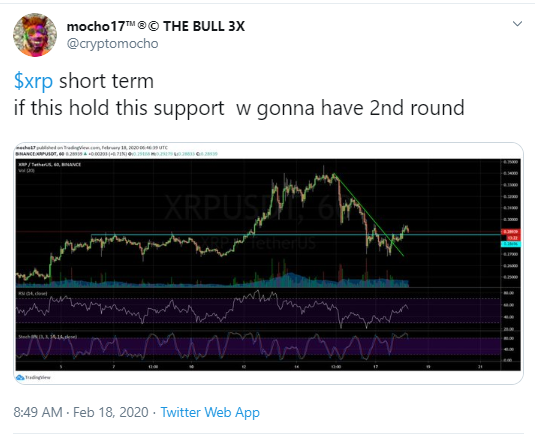 Since Ripple has set up the ODL corridors with MoneyGram, XRP liquidity offer jumps to a new level. Dave Jones, who is working as an analyst at the Mexican exchange Bitso. Last week, he said that there was a large swap of $54 million into the MXN using XRP.

That is $2 billion of extra volume yearly for the appointed exchange.

That is also attracting market makers.

And that is just 1 corridor for 1 client, early on.

This totals 7.5% of all the transfers made from USD to MXN. He thinks that the market makers are on the way. Back in December, Ripple was only facilitating around 3% of all the remittance traffic from the U.S. dollar to Mexican peso.

The History of Cryptocurrencies Is Shady

Ripple CEO Brad Garlinghouse gave an interview with Julia Chatterley on CNN. During the talk, Brad said that the history of cryptocurrencies is full of uncovered details and shadows. That’s why it is not so easy to get rid of the speculators, thieves, and crooks of a different kind. He claims that the opposition of speculating is to propose real solutions, which is the Ripple’s primary activity.

For a cryptocurrency, it is not necessary to circumvent regulations, break the laws and set the world of fire. Essentially, you can just lie out the regulated, yet cryptographically safe transmitting solution and gain profits, as well as fans, in different jurisdictions. Brad highlights that the remittance industry could be much more efficient if it uses these new technologies, such as the blockchain.