The Airbus stock price is rising, and the only danger seems to be the coronavirus attack that has a negative influence on businesses. The company has recently shown its new plane, possibly revolutionary and certainly stylish.

Airbus has proudly presented a new type of plane on several air shows. The new plane has blended wing body design, which is a rare thing. Also, it’s a stylish thing which emits 20% less carbon than other similar models.

The project’s codename is Maveric, it’s a 10.5 feet wide demonstration model. In 2019, at a secret aircraft station somewhere in France, Airbus was showing it to a closed circle of managers. However, the general public got their eyes on the plane during recent Airshow in Singapore.

The idea of ‘blended wing body’ takes roots in 1940, when the U.S. engineers created the B-2 bomber machine. Also, ten years ago NASA inked a contract with Boeing on research and development of mysterious X-48 aircraft.

As you may suspect, the unusual form of the planes allows them to reach high speed and receive less tension from the air. The less tension the plane receives, the less fuel it will consume during a flight. Aircraft designers keep reinventing the concept of wings slowly turning into the body after rising demand on environmentally clean machines.

“We need these disruptive technologies to meet our environmental challenge. It is the next generation of aircraft; we are studying an option… We believe it is high time now to push this technology further and study what it brings to us”

It is good when a company’s top managers think about changing the attitude to the outer world. During the plane’s development, computing parts have increased in capacity and efficiency. Also, new materials allow the plane to be even lighter than a year ago. Dumont is not sure whether such form factor will go mainstream by the 2030s.

Airbus is at an additional study on how the new planes will fit in the airports. Also, they consider replacing the classic windows with internal screens. The passengers won’t have the ability to look at the beauty of clouds through the glass. A sacrifice of joy for the sake of safety. However, such improvements will make the flights on some Airbus models more attractive to people fearing that the windows could be blown off.

Also, because the plane won’t look like the usual tube with wings, people will sit far from the plane’s centerline. There is more of the free space which could be used for cargo. But there is a small problem with people sitting far from the center – when the plane turns, turbulence rises. The designers have to deal with a ton of stuff while inventing this new beast.

If you had their shares all this time, you suppose to get big profits out of the company’s constant growth. Every year, the company made its shares worth 22% more, and they made an 18% profit out of every share. 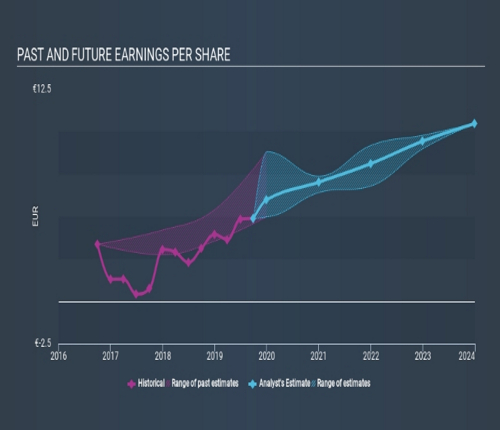 It is important to calculate the total shareholder’s return, as well as share price gains. The share price return only shows us that the price on a commodity was on change during some time. But total shareholder’s return is a much more interesting metric, as it shows reinvesting profits and spin-off profits of any kind. So, per the stats, Airbus’ Total Shareholders Returns are 196%, which means even more gains for the investors and the company’s image. Such big dividends arise from the company’s will to please investors with additional profit without artificial burdens.

But the Scary Virus May Interfere Economics

The only bad concern about the company’s future is about coronavirus attack. The Chinese market is the world’s richest one, and the country holds one of the Airbus Assembly Plant. Due to the virus, the final assembly line that is situated within that plant is not working for weeks. Every month, this assembly line is generating $300 million in profits for Airbus. The supply and demand for jets could change.

Not now, but in the longterm, this could have a bad impact on the company and the industry on the whole. Tesla, McDonald’s, Starbucks, Apple, and hefty car-producing firms closed manufacturing in China.

Ford has reduced its Mustang electric vehicle prices and is driving up production to match Tesla’s announced lead.

The Bloomberg journalist notes that although the Apple mixed-reality headset will be far more advanced, it would be too costly with no ergonomic design for greater adoption.

Back in January 2022, Elon Musk took to Twitter to offer the McDonald’s fast food chain to accept Dogecoin. The subject popped up again when a Twitter user Dogedesigner asked Elon Musk whether his offer is still open.