Some years ago there were not so many crypto enthusiasts who believed in the power of altcoins. Though Bitcoin is still a leader, some altcoins are showing quite impressive results in 2019.

The high fluctuating Bitcoin prices since its launch have made altcoins a go-to investment option for most of the crypto enthusiasts and traders.

If we go back to February 2017, it was the first time when the entire crypto community has realized altcoins potential as their market value went sky-high after the Bitcoin halving in July 2016. 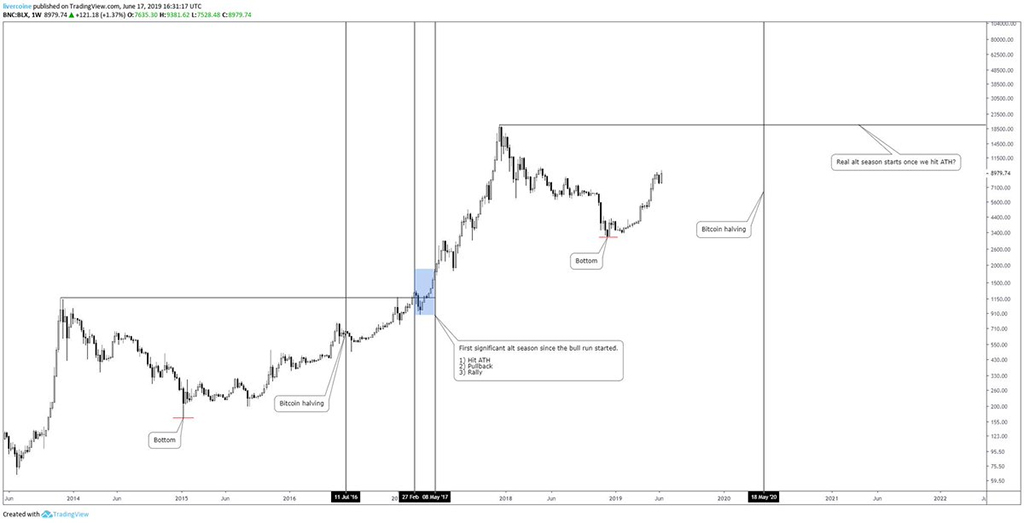 All the popular altcoins, including Litecoin, Stellar, Ethereum, and XRP have observed a staggering growth up to 5300 percent. As per the 2017 data, the market value of Litecoin went up by 700, Stellar increased 320%, Ethereum by 1060%, and XRP prices went berserk up to 5300% (see chart above).

Compared to altcoins, Bitcoin from halving event in 2016 to March 2017 have not seen that dramatic growth and its prices went up by 200% percent only.

Moving forward in 2018, both Bitcoin and altcoins went through the same path in terms of price fluctuations or market value, but the former was more volatile in pricing as usual.

In 2019, right from the beginning, the prices of frontrunner altcoins have rallied up and have observed double-digit gains. Many popular altcoins like Litecoin have doubled in market value. The Bitcoin brethren’s have also moved upwards in the Google Trends list.

Many of the low, mid, and high market cap altcoins have also observed a high upsurge in prices when compared to Bitcoin in 2019.

For example, low market cap altcoins like Titan Coin are moving rapidly upwards in crypto price charts in 2019 due to its multiple use cases. Titan Coin is an innovative experimental internet currency that is growing at tenfold speed, all thanks to its next-generation blockchain technology that employs hybrid POW and dynamic POS structure, along with SHA256+ GROSTl for verifying and securing transactions.

The rapid rise in the market value of the altcoins in 2019, even before the Bitcoin halving period is a bit surprising for the crypto experts. On the other side, the market value of Bitcoin also reached a staggering high of USD 13,020 in 2019, after a stagnant growth since mid-January 2018.

Some experts in crypto space are arguing that 2019 is not the altcoin growth season that all are touting it to be. Altcoins are still in the accumulation phase in 2019, and the next in line is the Markup season where the prices of altcoins will surely stun the entire crypto community in terms of profit-generating growth.

Bitcoin stats in 2019 also seems to support the above expert arguments. In many phases of 2019, Bitcoin’s market gains are more than that of large-cap altcoins and the relative Bitcoin share of the overall cryptocurrency market is also at an 18-month high. The around 300 days away time period of the Bitcoin halving event is also something in favor of Bitcoin.

Whatever it may seem, many (both small and large-cap) altcoins like Titan, Litecoin, etc. have seen a massive upward price moment in 2019, even better than Bitcoin in some cases, which is a big surprise for everyone. This can also be considered as a period where “smart money” is being invested by investors to reap benefits in the following markup season where altcoin prices go sky-high.

Amit Gupta is the CEO and founder at SAG IPL, an India-based technology firm providing a range of service/software solutions in the web development, design, app development, and SEO industries.

This February, Ethereum is reportedly launching Zhejiang, the dress rehearsal testnet for its Shanghai hard fork.